The Albany Last Run is a very popular local race. In fact, it always sells out (at 2000). The race starts with fireworks and then you run uphill, around the light displays in the park and it ends with a downhill. I have run it every year since 2010 (except in 2019 when I was injured and in 2020 when it was canceled) and it is one of my favorite races.

So this was my TENTH time running this race!!

Unfortunately, this is the LAST YEAR for the Holiday Lights in the Park.  That probably means it is the last year for this race. Sigh.

Here is a pic from a previous year:

One year, I ran this race in the rain. Another year, in a blizzard.  This was how I finished the race in 2017.

icy and very slippery!! and yes, that’s me on the ground!

I was hoping for better weather this year.  Could it be any worse??

They used to give out windbreakers for this race and I have them in many colors.

The previous weekend, I finally took a break from racing and did a 8 mile long run.

Otherwise, the two weeks before, I had run a 15k, half marathon and 10k.

I guess to complete the series, I needed to run a 5k.

Of course, I debated about what to wear… I always like to look festive. But rain was predicted…

And then the temps were supposed to go up to 60 degrees.  I almost switched to a skirt.

Due to the fact that this was the last year for this race, it did sell out!

To save time, I went to the race headquarters on Wednesday night and picked up my race packet.  In fact, I picked up 9 of them (for the others in my running group).

As in previous years, the shirt was uni-sex and TOO big!

I decided to keep my original race outfit but with a lighter shirt under my long cotton tee shirt.

Most of the group carpooled together because we were having a pot luck party after and wanted to leave our food off there before the race.

We parked in the underground parking garage. Super easy (though it did cost $5).

Immediately I ran into so many runners that I knew. Everyone comes for this race.

As usual, we wanted to take pre-race photos.  And a radio station was taking them and said they were send them to a phone.  We took many goofy group ones. (It too a while but eventually we did get those pics/videos.)

It was so fun (even wearing masks) to see everyone and their costumes were so creative. 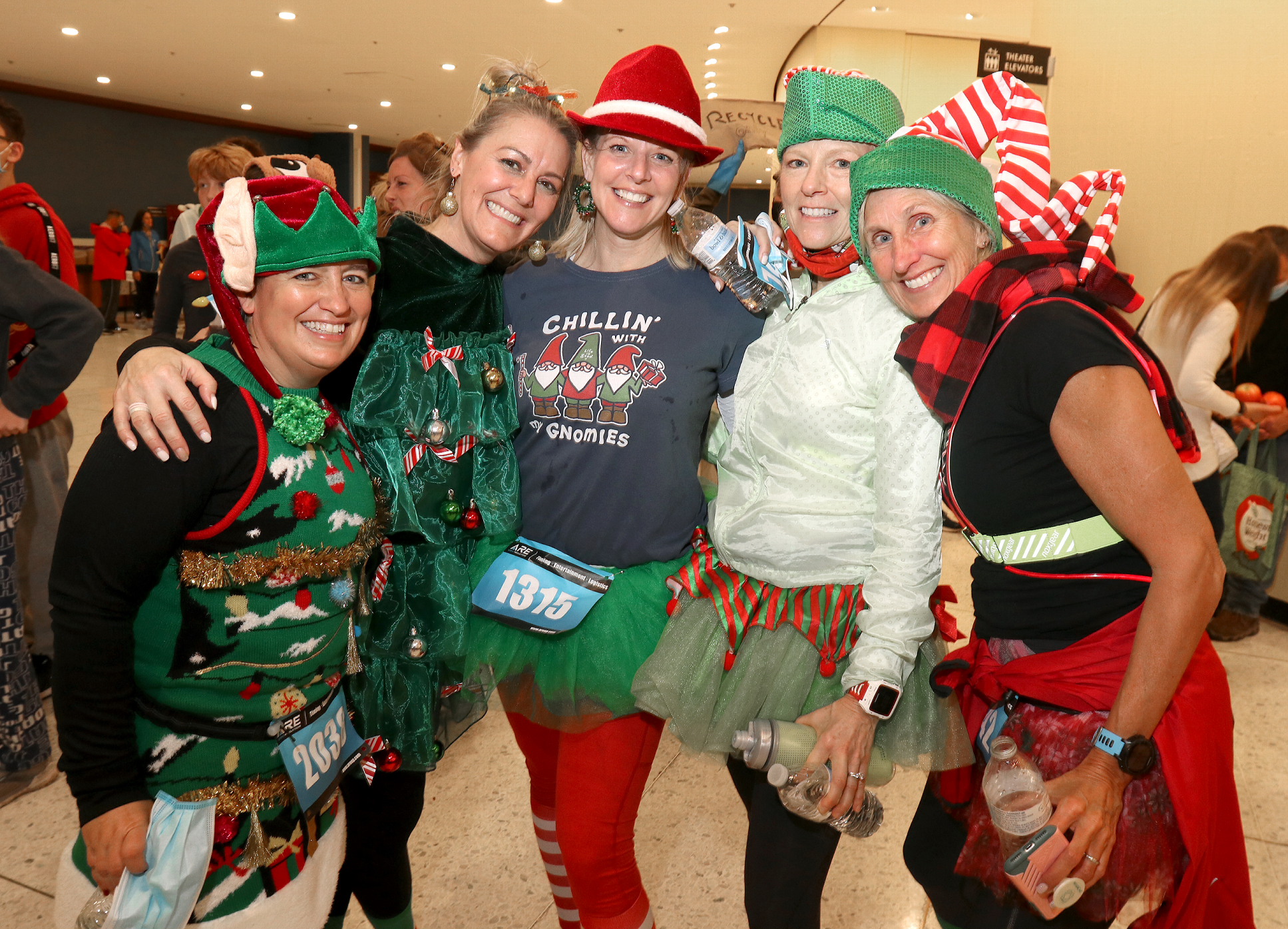 Finally we all left our warm home to go outside

yes, there was a Santa Claus (or two or three)

and he took our pic.

and watch the pre-race fireworks:

Almost all of my friends were planning to walk the whole race. I had run through the park a few times already and had seen seen the lights.

So I decided that I would run the race and left my friends and headed toward the start.

This is the course map:

This is the elevation according to my Garmin:

I always forget that this race is not chip timed and I should start close to the front.  It was very crowded and so I just pushed my way in near a few runners that I knew were at my pace.

It was dark as I crossed the start line, I am not sure that I started my Garmin right away (but whatever.)

The race started with an uphill, went through the city before we entered the park. It was crowded at first and usually the crowd thinned out but it really never did. I unsuccessfully tried to run but just was weaving in and out. And the lights around my neck broke so I had to throw them aside (and I’m sure the bulbs got crushed).

Once in the park, we were running under the festive holiday lights.  Though the road was filled with ruts and cracks, it was much lighter than on the streets.  We hit our second hill and I would have normally been tempted to walk up the steep hill but I didn’t need to and actually picked up the pace.

There was a clock at every mile.  It seemed that my pace was not great but too bad and around 10 mm.

It was still crowded and I was passing some runners but since I felt like I was running slow due to the crowds. I was able to enjoy the lights and the crazy costumes worn by the runners.  I got positive remarks from spectators about my outfit, as well.

from a previous year.

During this mile, I was really having fun!! I was running up the hills (slowly) but not stressing about pace. My biggest issue was that I was roasting!!! It was like 60 degrees. I took off my gloves, rolled down my arm sleeves but I definitely should have dressed differently.

I took these pics the other day when I ran through the park.

The whole time I was running, I kept looking at the ground trying to avoid cracks and uneven pavement and keeping an eye out for potholes and NOT FALL!! So far so good.  It was so nice that the roads were dry.

According to the clock, I was running about the same pace as mile 1.

Finally around mile 3, there was enough space to actually RUN. We continued our loop out of the park (the last hill) and then out onto the dark streets and down the hill to the finish line.

Who doesn’t love a downhill finish?

However I made to sure to carefully sprint and I crossed at 31:XX (GT).

I was happy. I ran almost the whole thing!! And I did not fall!!

I waited around at the finish line as others finished.

Then all of a sudden, I saw two of my group – Heidi and Chris.  They had decided to run the race instead of walking it with the others.

We were sweaty so we went inside to stay warm,

glad we decided to take this pic since it took several days to retrieve the others.

I grabbed some water but there were only bananas and apples and we had a pot luck dinner planned for after so I didn’t eat anything.

Soon the walkers returned and we all headed out to our cars.  I was pretty sure none of us won any awards.

An after party has been an annual event with my running group.  But this year, it was also a going away party for Jenn who was moving away.

It was a fun time with lots of food and a cake.

Yes, it was my slowest 5k this year but one of the most enjoyable 5ks that I ran. It was a great way to get into the holiday spirit and connect with other runners.

Yes. Yes.  Definitely a must do if you live near Albany, NY.  Even fun to walk it and enjoy the light displays.

Obviously this race will not be happening again. Maybe something similar will be planned during the holidays for next year?

Then a half marathon:

Happy Running?  Did you run in a holiday race this year?  If you did, what did you wear? Please share.