This was my 5th time running this 10K race and my 2nd time NOT being part of the Turkey Trot Challenge training group (work work work.)

I really enjoyed this race my first time I ran it in 2014 (in spite of the snowstorm) and now I look forward to this race every year. 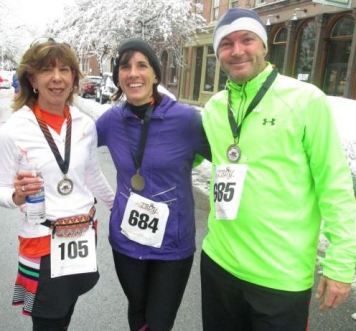 The weather was a lot better and I had a blast even though my finish times were not the greatest. 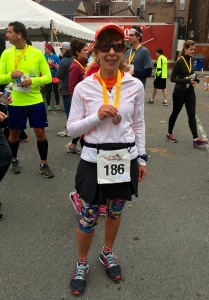 Last year, it was FREEZING and I DNSed both races 😦 partly because of the weather but mostly because I was going to running a hilly Half Marathon 2 days later (which seemed more important.).

The course this year was the same as previous years.

My hubby picked up my bibs on Wednesday so I didn’t have to rush on race morning. 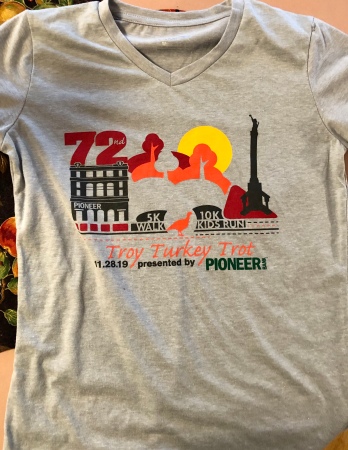 But I did want to arrive early to get parking. I parked in the bowling alley parking as I did in previous years and walked a few blocks to the Atrium where I could wait indoors for the race to begin.

I checked my jacket, change of shirt and 5K bib since I wouldn’t need them until after the race.

pic from a previous

This year it was not as cold as past years- in the low 40s and cloudy when I arrived. I was hoping that the sun would come out but still was undecided on how many layers to wear. I get hot when I run and I HATE to be overdressed. But the downside was the WIND (predicted to be up to 40 mph). Yikes!!

So at the last minute, I decided to shed my vest and just wear a long sleeved shirt with a half zip over it, a warmer hat and light gloves.

This a very popular local race as I mentioned so I always bump into so many runners that I know. I chatted until it was time to brave the temps/wind.

inside the Atrium – photo from the TU

The 10K started at 8 am followed by the kid’s one mile race and a one mile walk and then at 10 am the most popular event, the 5K.

I squeezed into the crowd at the 10 minute pace group.

My plan for the race was to not to start out too fast and to run at an even pace and to save some for the last mile.

For some reason, this race seemed a lot more crowded than past years. For my pace, it never thinned out. I was running in a crowd the whole race.  At the beginning, I would barely move.

a pic from a previous year

The course is pretty flat. You run over the Green Island bridge twice near the beginning and then run through Troy before you turn around and run back.

I had not done any speed work since …well, I can’t remember when and I “trained” for a FULL  marathon this fall, I wasn’t sure what to expect from my legs. (And then there was that mysterious foot pain last week while working in NYC.) 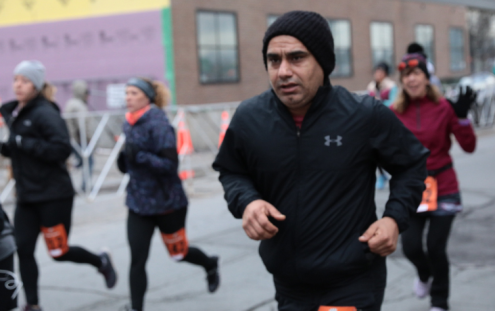 yes…my sunglasses (that I didn’t need) kept falling down

So the sun never come out and I felt perfectly dressed. I even took off my gloves and unzipped my shirt during the middle miles when I felt warm.

The wind was tough. It seemed to blowing at you the whole race. Plus my darn foot was hurting. Dr Google says Metatarsalgia. The ball of my left foot seems to be swoll enand my toes feel numb. It’s bothered me since standing and walking in uncomfortable shoes last week in NYC. Anyway I can run but my gait feels awkward and sloow.

There was a some crowd support during the 10k race (Much more for the 5k.) There were guys handing out bottles of beer and a bakery was handing out donuts.

There were quite a few water stops. I skipped the first and third one but I was dying for a drink by the second one and walked for a bit.

Timing clocks were placed at every mile. I didn’t have to look at my watch to know that I was too slow to PR. I wasn’t sure if I would even finish under one hour.

during the last mile

and I saw the photographer!

Finally I could see the finish in the distance. I wanted to at least sprint through the finish line. My friend Holly was on the side line cheering me on but I had a hard mustering up any real speed.

I tried to cross under 59 minutes but did not. There was no zip left in this girl’s step.

Not a course PW but close. Over 2 minutes slower than my course PR. 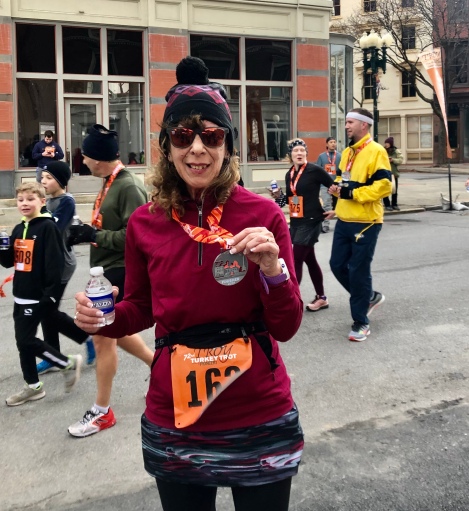 I got my medal, drank some chocolate protein milk, had a banana and then checked the results.

As expected I did not win an award but I was surprised than my time gave me 4th. As I’ve said before, it depends on who shows up. 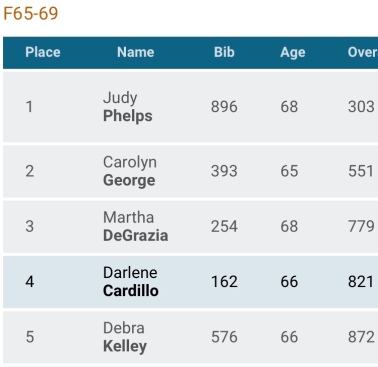 This year, like the previous three years, I signed up to run a second race, the 5k about an hour later.

So I walked back to the Atrium. Boy, was it crowded… More than five thousand runners squeezed into a small building.

I had already picked up my bib but I needed to get it from my checked bag and maybe change into a dry shirt.

If you look at the pictures above, you may notice that I always run the 5k with my tennis friend. I thought that she would run it when I signed up. Unfortunately, she did not (health/family stuff) and so I hung out with some other running friends until it was time to line up.

To be honest, I really did not feel motivated to run this race. I considered a DNS but in the end, I decided just to “do it.”

This was the 4th time that I had run the 5k race (and always for just “fun.”) It was just an out and back course and you didn’t run over the bridge at all.

Finally it was time to get into the starting area. You were supposed to line up by color but I just squeezed in. And I happened on my friend Holly. She had not run the 10k so had fresh legs. She quickly left me in the dust

pic from a previous year

Of course, my legs were tired from having already run 6.2 miles (at race pace) so all I wanted to do was finish.  My  stomach was also queasy from the milk and the banana. I was hoping to come in under 30 minutes but with the pain in my foot, I was sure that was impossible.

The 5k is the fun race.  Many runners are dressed in costume.  Many families were running together.  There were walkers, etc. Everyone was there to have a good time.

photo from the TU

It was so crowded that I had no problem slowing down in the beginning. Like the previous race, it was crowded the whole race.

And my legs were not cooperating. They wanted to run slow. And so I did. And it seemed to be colder.  The wind had picked up. My foot was even more sore. (Yes, I was wondering why I ran this 2nd race!!!) 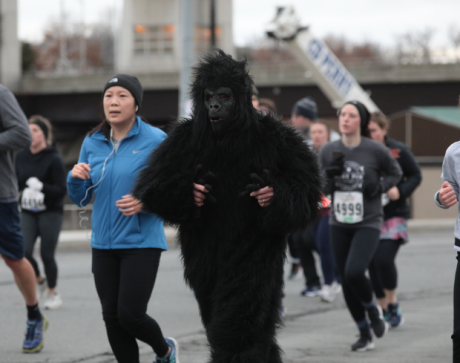 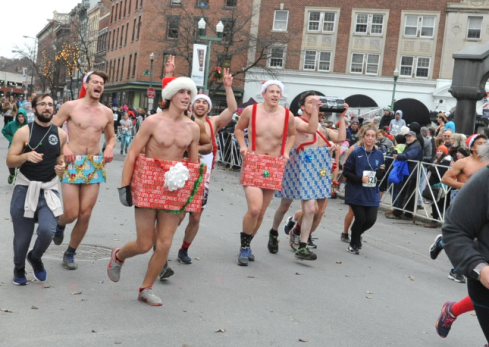 It was NOT warm out but they were obviously having fun

I crossed around just under 34 minutes which was 32:57 chip time.

(This time it was a big course PW!!

I got my medal (the same as for the 10K), some more chocolate milk and then went back to the Atrium to get my bag.

I figured that there was no chance of an award in this race either so I left without checking the results.

Gee…look at that..my last mile was the fastest. Go figure!

But they were way slower than my 10k splits!!!

Anyway, back to these races:

Overall, I enjoyed the races. I am glad that I ran them. Racing is not only about fast finish times. I think I will run one or both Turkey Trots next year too.

After the race(s), I always go out for coffee with my tennis friend to debrief about our races. Instead I headed home to finish the soup that I was bringing to dinner.

Then later that afternoon, I ate back all the calories that I had burned off.

and Wild Workout Wednesday with Nicole, Annmarie, Jen, and Michelle.

Happy Running! Did you run off that turkey?