Every Wednesday, the Deb from Deb Runs will be providing a word about which to blog. Kind of like a nice little blog prompt. Posts can be fitness or health related, but don’t have to be, so really anyone can play along. Just be sure to link up with InLinkz on Deb’s main post, and share the love by reading and commenting on other’s participant’s posts.

Today’s word is captivate or to attract and hold the interest and attention of.

So how’s does running captivate me?

the trails in Palm Desert, CA

the shores of the Atlantic in Palm Beach FL

the boardwalk in Asbury Park, NJ

These captivating locales would not have been seen by me if I wasn’t a runner. 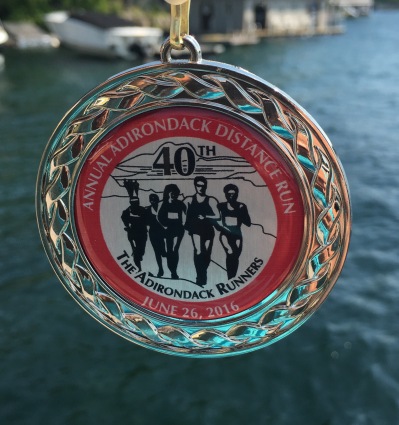 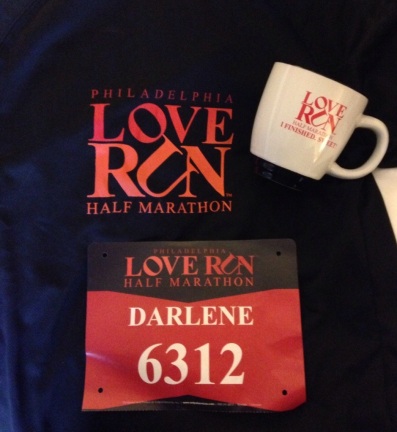 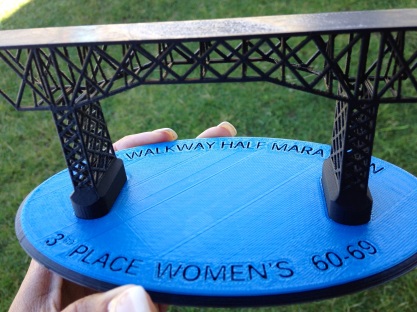 Medals and prizes. These captivating objects also have come into my possession only due to running. 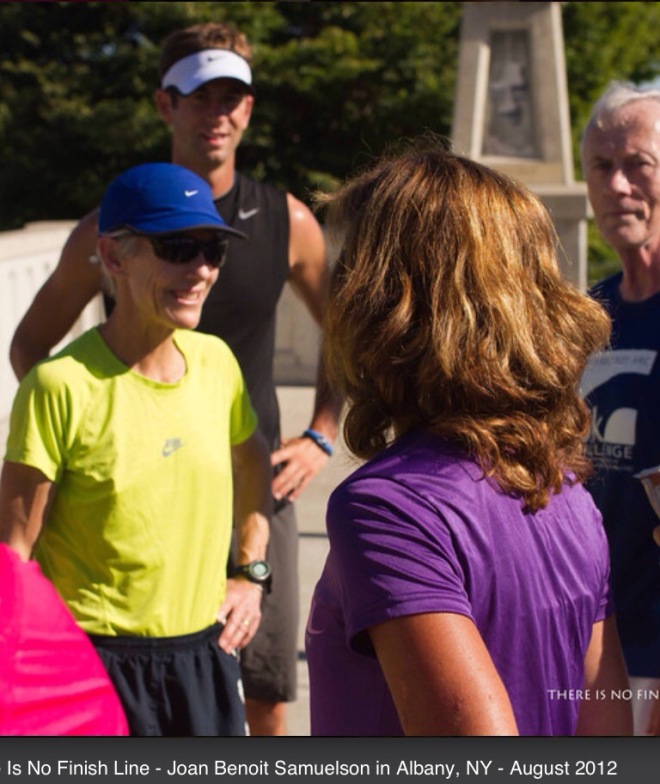 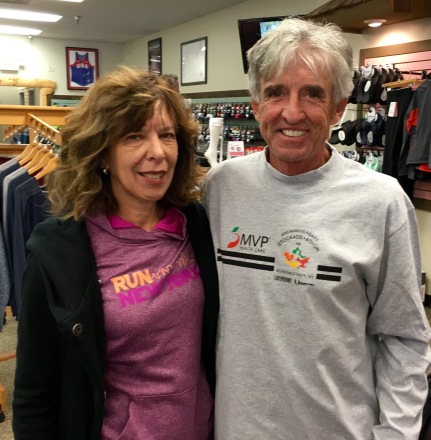 getting my bib signed by Frank Shorter

All captivating. Some famous. Some not. If I had not been a runner, I would not have made their acquaintance.

finishing a heat cancelled half.

I have done things that I never thought possible. Running has given me a sense of purpose, a feeling of self-confidence

and has CAPTIVATED me.

Happy Running!  How has running or something else captivated you?

Since it’s Friday, I’m linking up with three DC area bloggers Mar at Mar On the Run, Cynthia at You Signed Up For What?! and Courtney from Eat Pray Run, DC .  Anyone can join with their own Friday Five post (yes, it must be a Friday Five!!)  They encourage you to visit other blogs on the linkup, comment, share and engage!

Since I rarely cook or bake anything healthy or exciting, I decided to write about Starbucks.  I’m experienced in this area..

Healthy Starbucks sounds like an oxymoron but believe it is not, you can get your daily fix and not go out on a limb calorie-wise.

When you order using the app, besides not having to wait online, you can more easily customize what exactly you want.  There are customizations that you wouldn’t even know exist.  Less caffeine, less ice, sugar-free options, milk options, etc. 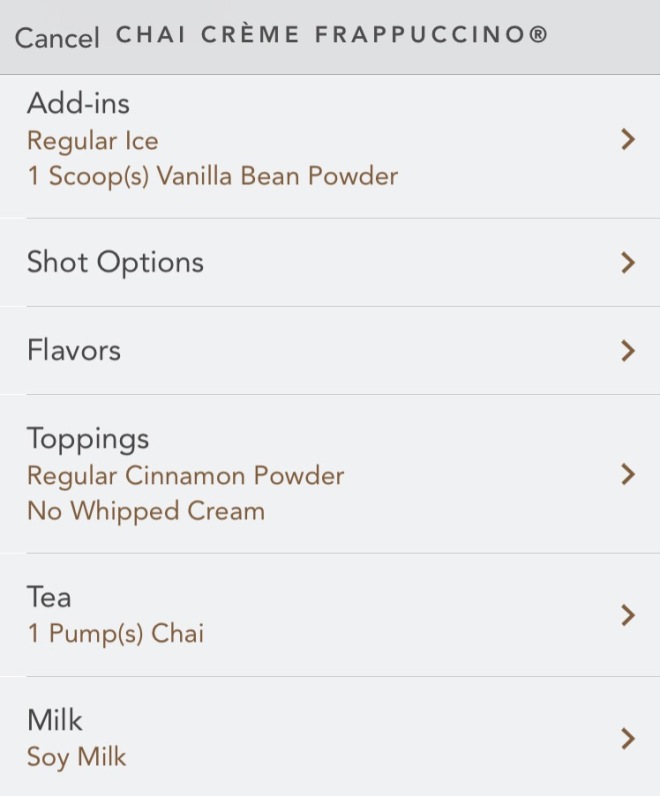 I know that frappuccinos and lattes look and taste better but you can save 100 calories.  Instead add some cinnamon, chocolate or cinnamon powder on top.

You can easily add the calorie-free syrups or artificial sweeteners.  I like to carry my own Truvia or Stevia with me.

I love the chocolate banana smoothies.  I often have them before or after a run.  But you can add protein powder to any Starbucks drink. You can also add a banana.

I’m addicted to these.

Okay, you may be saying that that it is costly and everything you add costs extra. True.

But keep your eye out for afternoon half price specials and days when you get double stars, etc. Eventually you will earn a FREE drink. (That’s when I go for the Venti size!!) Happy Running! Anyone else a Starbucks addict? Any other suggestions?

after work on the rail trail 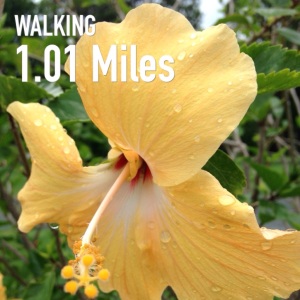 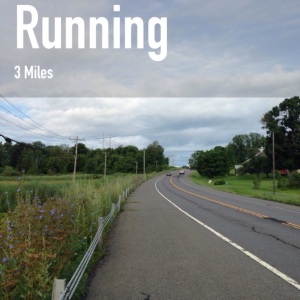 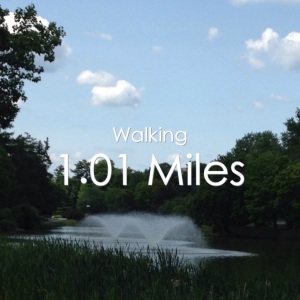 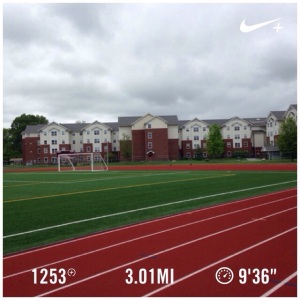 on the track after the rain stopped 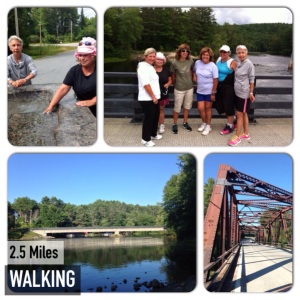 just a perfect run, wish I had time for more but tennis was calling me…

Happy Running! How is your running going?  Any races ?

As I mentioned last week, this past weekend was to be a NO RACE, NO BOATING weekend.

Racing and boating are my two most favorite things to do but nevertheless, I had a great weekend.

I drove up North to my friend’s house in Chestertown on the Schroon River where my tennis friends would be gathering. 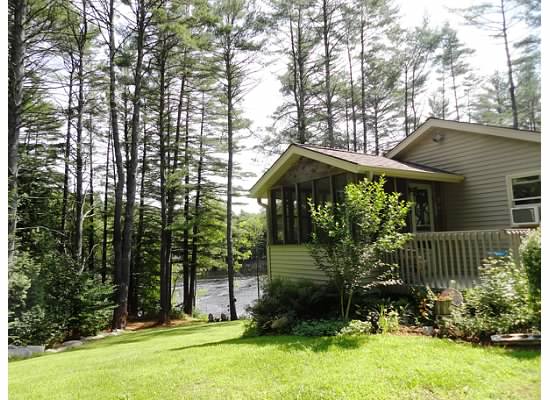 When we got there Saturday morning, the courts were wet from Friday night’s rain.

Luckily, the courts dried quickly and we were able to play.  There were 12 of us and we played for hours just rotating partners. 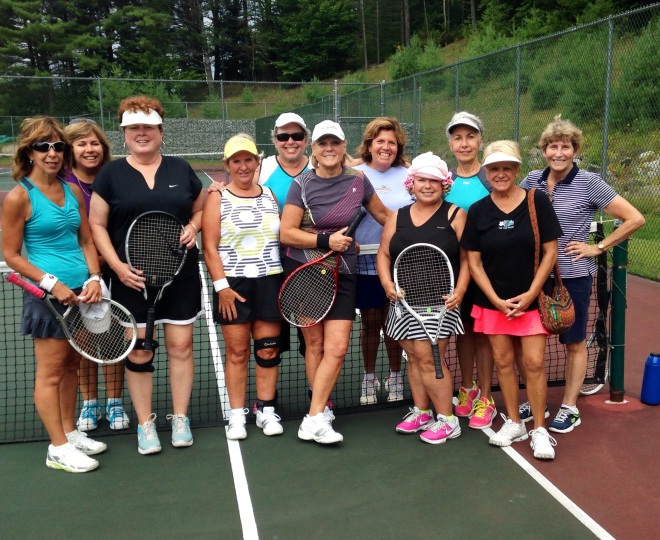 I don’t play often but when I do, I realize how much fun it is and how great it is to spend time with these ladies (whom I don’t see often.)

After tennis, we had lunch and some of us went for a walk. 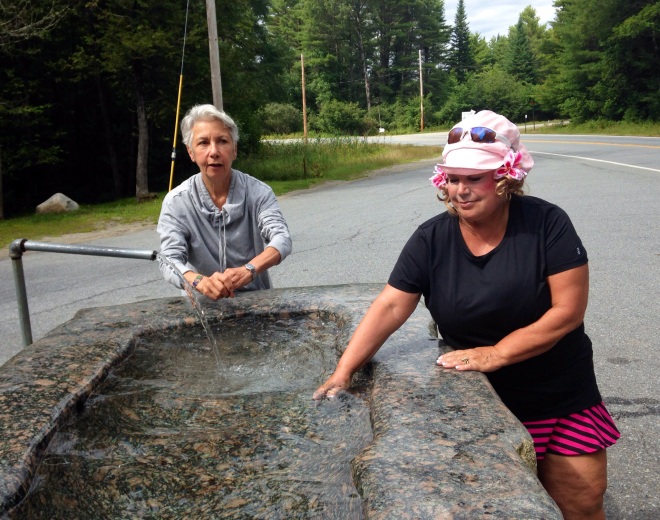 The rest of the afternoon was spent reading, knitting, chatting and catching up. Then we went out to a local restaurant for a late dinner.

Many of the ladies went home that night so there was enough room for me to sleep over (instead of sleeping on my boat.) 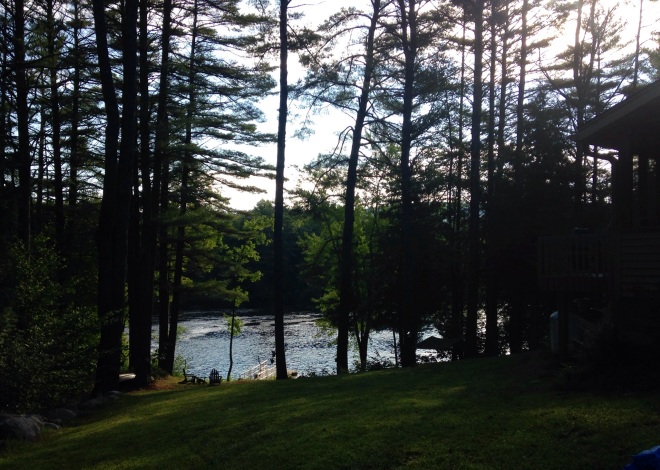 I got up early Sunday morning in order to squeeze in a run before tennis.

And it was the best one I’ve had in a long time. 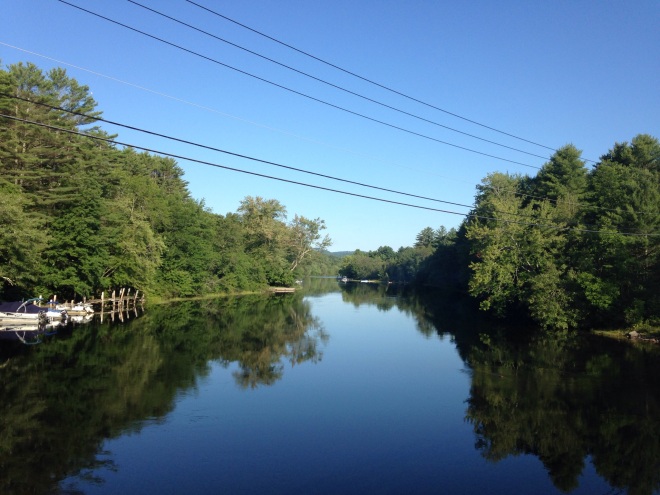 The weather was PERFECT – not too warm, no humidity and blue skies.

I started on my usual route with a few detours. 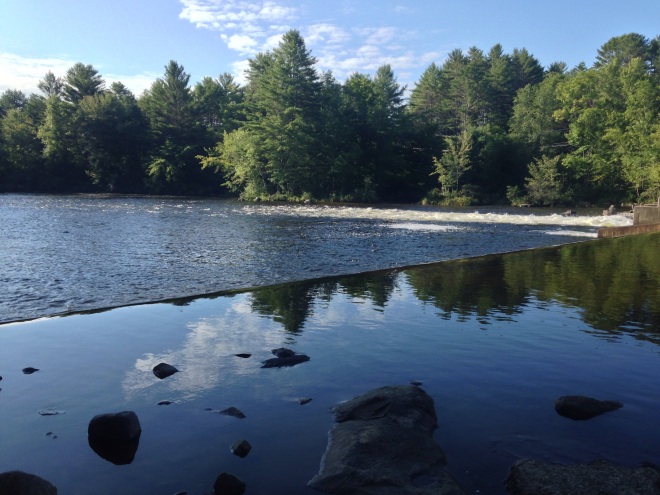 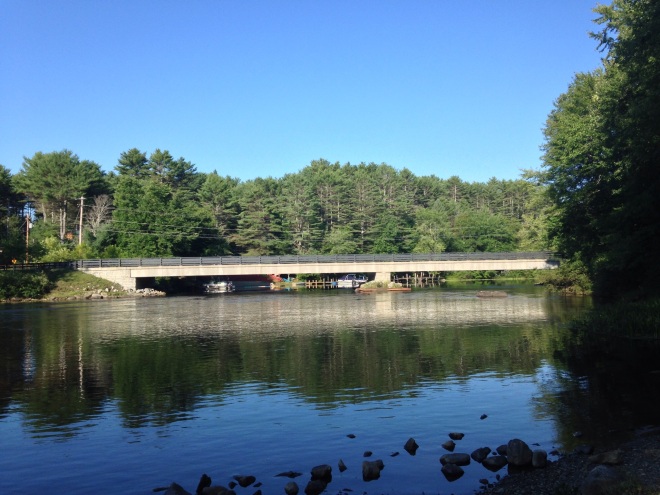 But rather than running to Brant Lake as I did the last time I was here, I continued North running along the river.

I actually felt like I could run forever but I had to get back since some of the women were probably waiting to play tennis.

I worked up an appetite after 5 miles and had breakfast #2 (blueberry french toast & bacon) before heading back to the tennis courts.

It was only 4 of us this time but we had a blast. 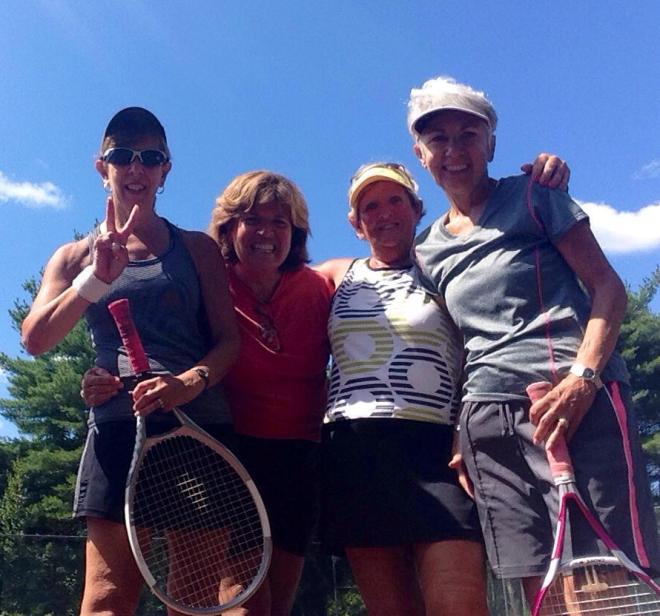 We played 3 set and the last one ended in a tie. So we celebrated by going out for ice cream (of course.)

The rest of the afternoon was spent with a drive to Brant lake and some reading & relaxing before I drove to the marina to meet my hubby for dinner. (He had spent the weekend on the boat with his guy friends.)

Not my usual summer weekend but it certainly was enjoyable.

Happy Running! How was your weekend?

I am determined to run 3 times a week again and get in shape for the Boilermaker – beside I havbe a race on Sat.

This time I brought my iPod touch to the gym.  I walk/run for about 1 1/2 hours while watching 2 episodes on One Tree Hill that I had downloaded to my iPod.

I had a hard time running so switched back and forth to walking.

Today the heat index was over 100 degrees and only the die hards showed up at Fleet Feet last night.  I was hoping they wouldn’t make us run 3 miles.

Armed with a water bottle, we only did the one mile loop.  Then if we wanted, we could do it again. I decided to walk the second 1 mile and some running at the end.

It was hot!!! But not so bad… preparation for the Boilmaker July 13!