Every year, the Hudson Mohawk Road Runners Club puts on the Winter Series, a series of free races for its members ($5 for non-members). On New Year’s Day, starting at noon, they offer the Hangover Half or 3.5 mile Bill Hogan Run as Winter Series #2. 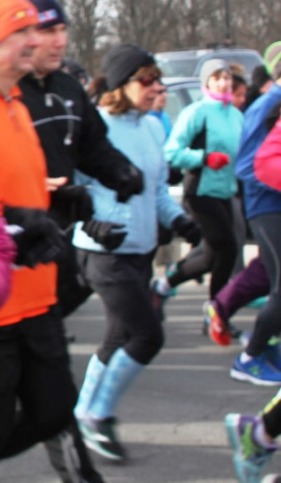 and it was a very cold one

It was definitely more enjoyable so I decided to run the 3.5 miler again. They call it a 3.5 miler but I realize each year after the race that it is actually 3.75 miles.

Starting at noon meant that I was able to enjoy my New Year’s Eve.

I arrived at UAlbany early figuring that there are a lot of local runners who do these races and I wanted to get a close parking space.

Today it was forecast to be in the high 30s but I was worried about the wind on this course. It is always windy!

I wore the usual winter layers. The good thing was that there is an indoor place to hang out before and after the race.

This race brings out everyone I know who runs – from running groups, races, friends, etc. 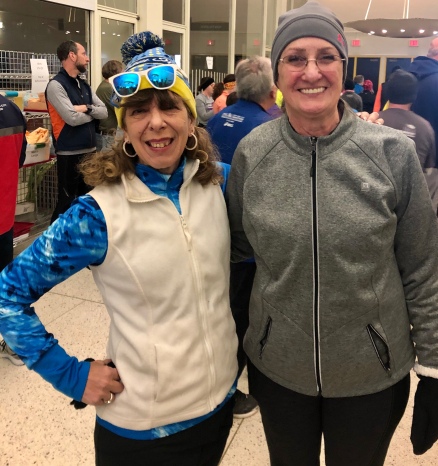 So it was great seeing everyone and catching up. I immediately bumped into runners that I know from races but only one of the Sole Sisters. We hung out inside and chatted until the very last moment when we had to go outside. 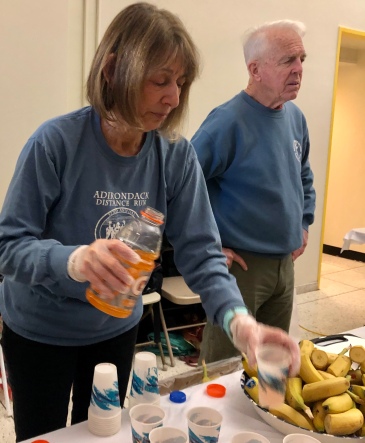 SS Judy chose to volunteer rather than run this year

Eventually we did have to leave the nice warm building and climb down the stairs and head to the start.

I just squeezed in near the front in order to keep warm and be shielded from the wind.

My biggest worry, of course, has been my foot. It hasn’t been pain-free since November 10.  There were 3 weeks off from running completely and then a few slow run/walks.

I told myself to have a “relaxing” race and not try anything stupid to make my foot pain worse. 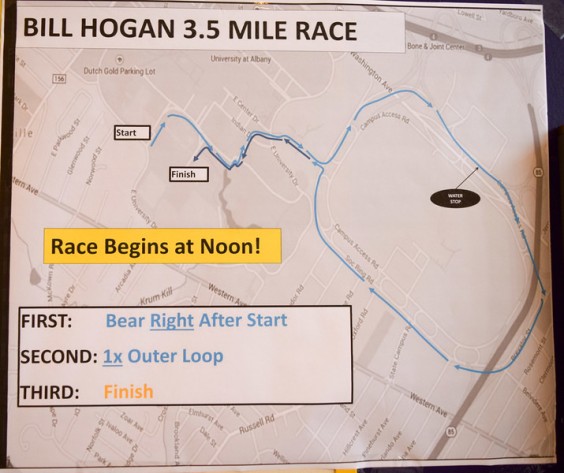 This course is not flat. There are annoying hills throughout. Nothing awful until you are tired (at mile 3).

This was the first year that I can remember that there was NO ice or snow.

I won’t lie. I was a little cold especially with the wind but at times, I was warm and unzipped my vest. I even eventually took off my gloves. I was happy with my clothing choice.

There were 208 runners running the 3.5 miler (and 197 in the half). I was never running alone. I ran with someone I knew several times when they caught up to me but soon they left me behind.

I wasn’t bothered at all by my apparent lack of speed. I was just trying to get a run in. I wanted to run the race without walking too much since I rarely do that during my weekday runs. And I did for the first three miles despite the fact that my foot hurt with every step.  Unfortunately with my 6 miler the previous Saturday, my foot pain eventually went away.  It did not today. I tried to ignore and just finish so the pain would end.

There were no mile markers on the course but I could hear my Garmin beep. I couldn’t pay attention to my pace or time because my Garmin was under my long sleeves. (Probably a good thing.)

another pic from a previous year

As I mentioned, I was running until mile 3.  This was the most boring part of the course as well as uphill.  To make matters worse, the wind cam out of nowhere here. I struggled and the wind seem to suck the life out of my legs.  Runners were passing me by, even a runner pushing a child in a stroller.  I finally gave it and walked.  But it was just as hard to walk into the wind and so I started running again. At this point, I just wanted to finish. and be pain-free.

Finally, it was over and I was surprised to see that the clock read 35 minutes. I knew that it would not be close to a course PR but I actually thought that I was even slower than that.

Soon after, a few friends finished. We chatted. One in particular shared her identical foot issues and gave me the name her PT that enabled her to run pain-free. Score!

Eventually Jeri finished too. But I was too busy chatting and didn’t get her pic.

These free races are not chip-timed. They handed you a piece of paper and then you recorded your time.

Good old positive splits. Nothing has changed for 2020. LOL

Again this year, the course was long!! I was not surprised that I was slower than last year (34:15) and far behind my course PR from 2018 (34:04). Nevertheless, I was happy with how I ran the race. I never felt really tired or that I was pushing hard. I think if it weren’t for my sore foot, I could have run the whole thing and had an even better finish time.

Definitely not disappointed to not have chosen to run 13.1 miles.

And I had all of the above and many pieces of cranberry bread.

I waited around for awhile and chatted with other runners. Another runner also told me about her similar foot pain (bone bruises & tendinitis = 6 weeks of biking instead of running).  It seems that everyone has a story and a remedy…so we’ll what happens with my foot.

At these winter races, they give 10 year AG awards to the top 2 in each group. Two years ago, I won 2nd place and a free loaf of bread. Not so this year. I was 4th I think. Jeri and I did not hang around and went out for coffee instead.

So a race and a perfect way to start off 2020! (Now only if my foot pain would go away soooon!)

It’s Tuesday so I’m linking up with Zenaida and Kim (Kooky Runner).

Happy Running! Did you race on New Year’s Eve or New Year’s Day? If not, when is your first race of 2020?