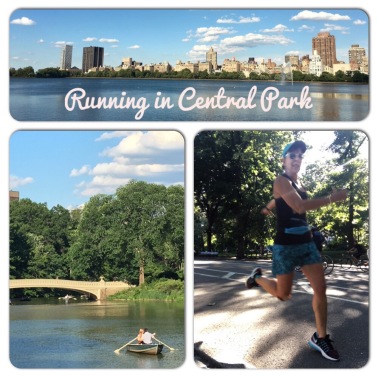 run from my last visit to NYC

So apparently during the summer months on alternating Wednesdays at 7:10 pm, there is a cheap ($7.50 – in past years it was $5) 5k in Prospect Park, Brooklyn.

Here’s all I could find out about the race from the NYCRuns website:

We’re gearing up for another great summer of evening 5K races! You don’t have to be fast to enter, but these races will help you find out how fast you can be!
Big news for 2017: we now have chip timing! All runners will receive their actual race time.
Races will start and end at the Bluestone Cafe at Lakeside Center.
There, we will offer:

Plus some free photos off their site (from the last 5k): 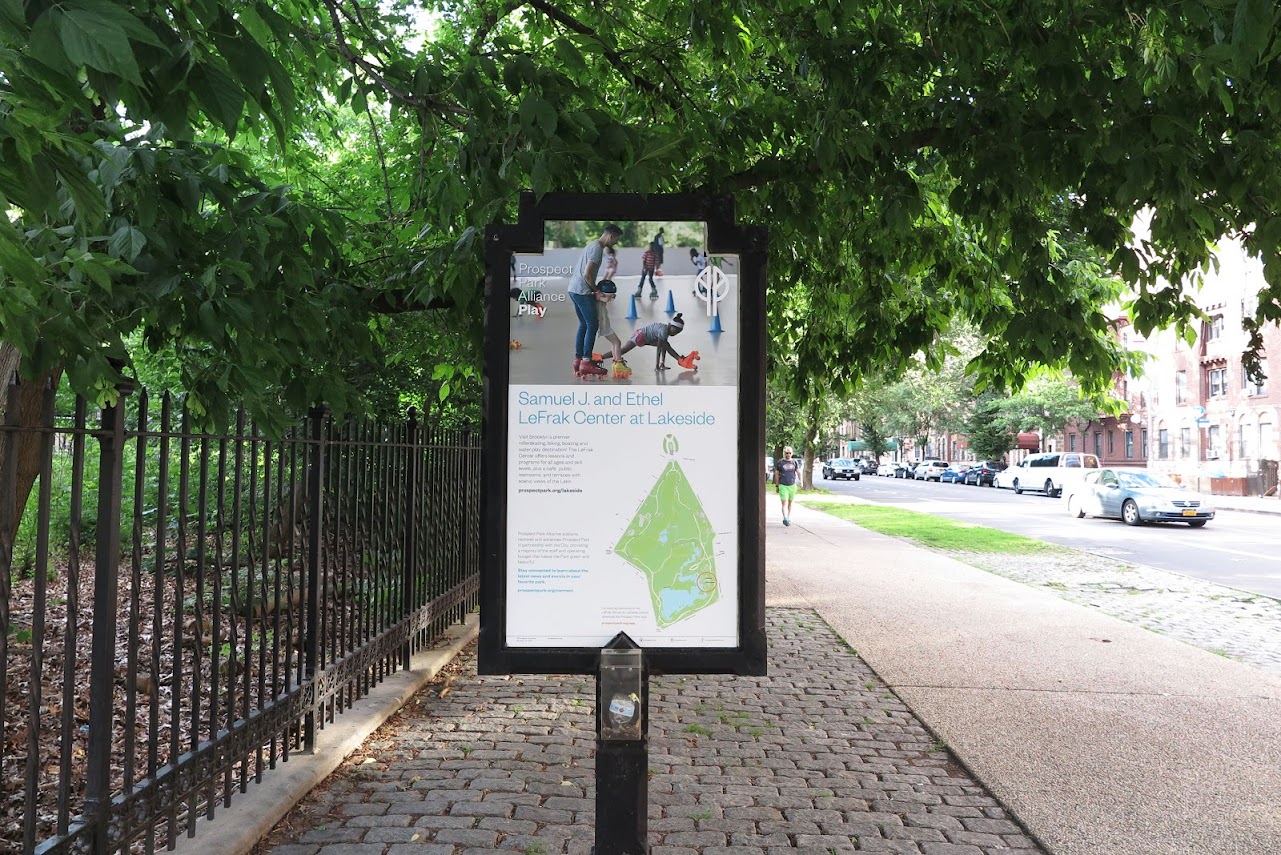 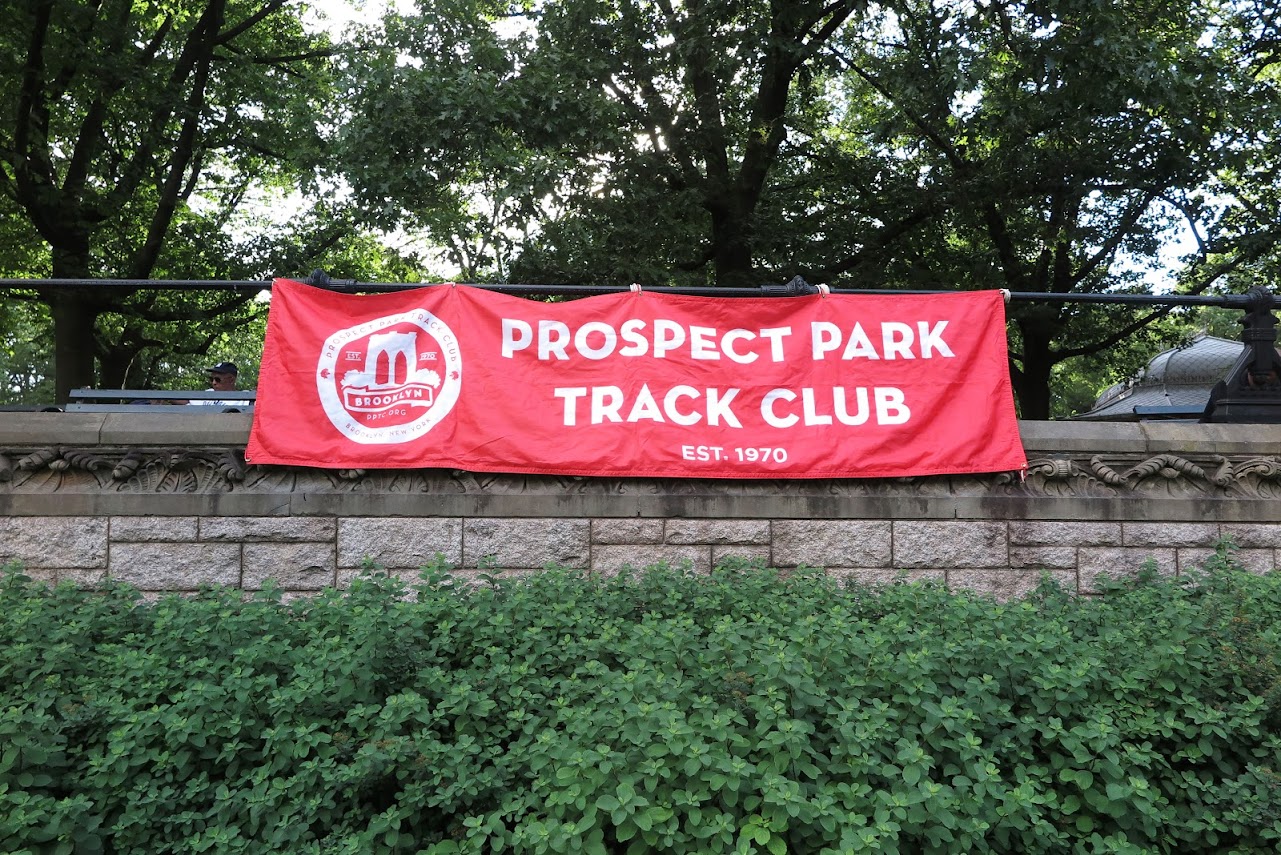 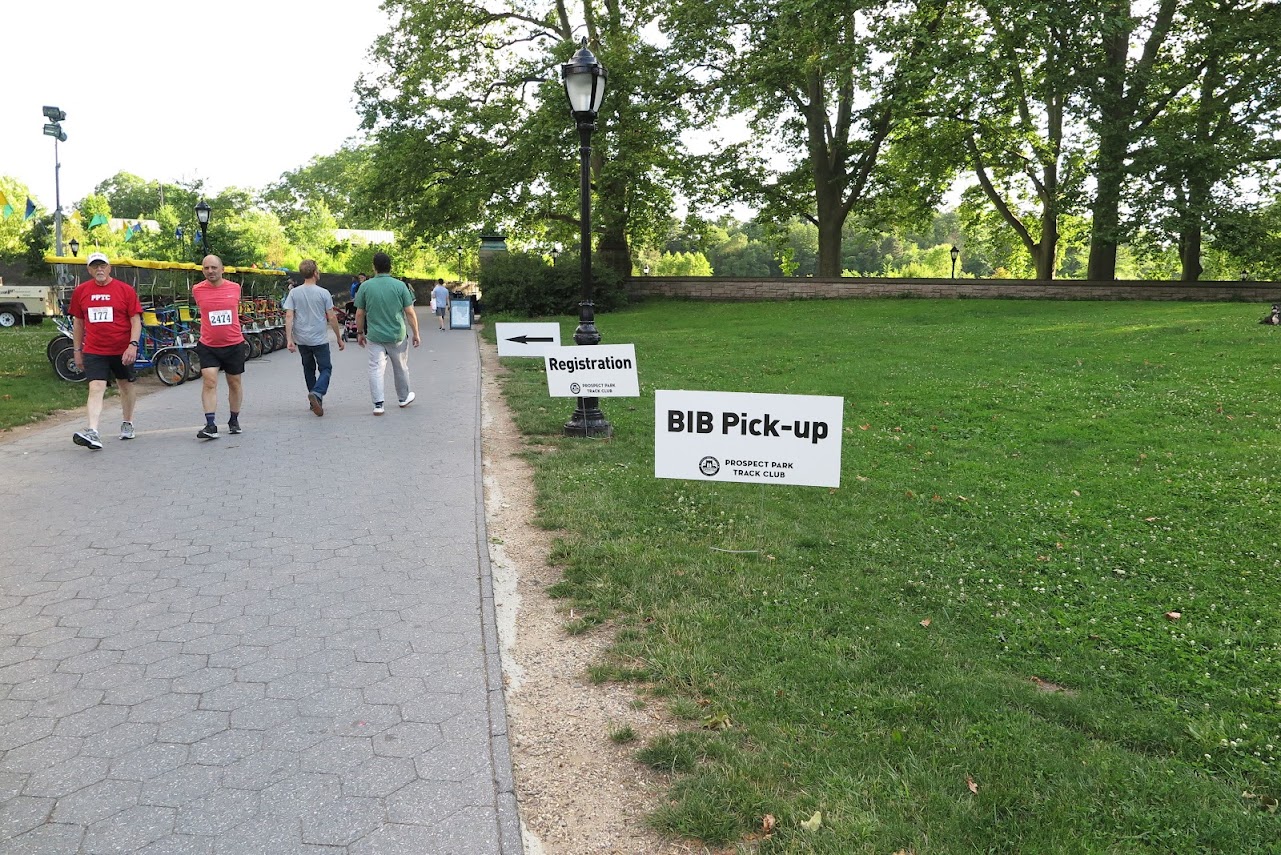 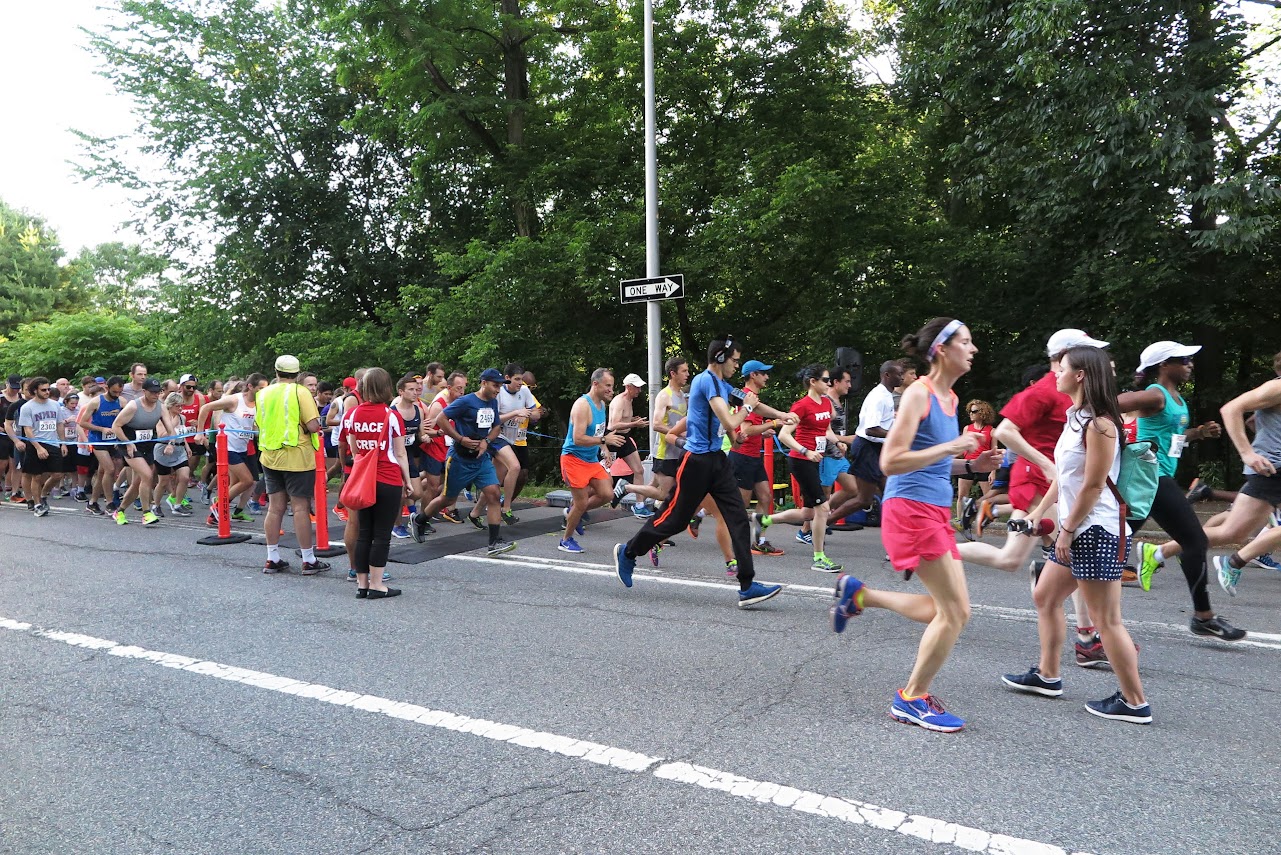 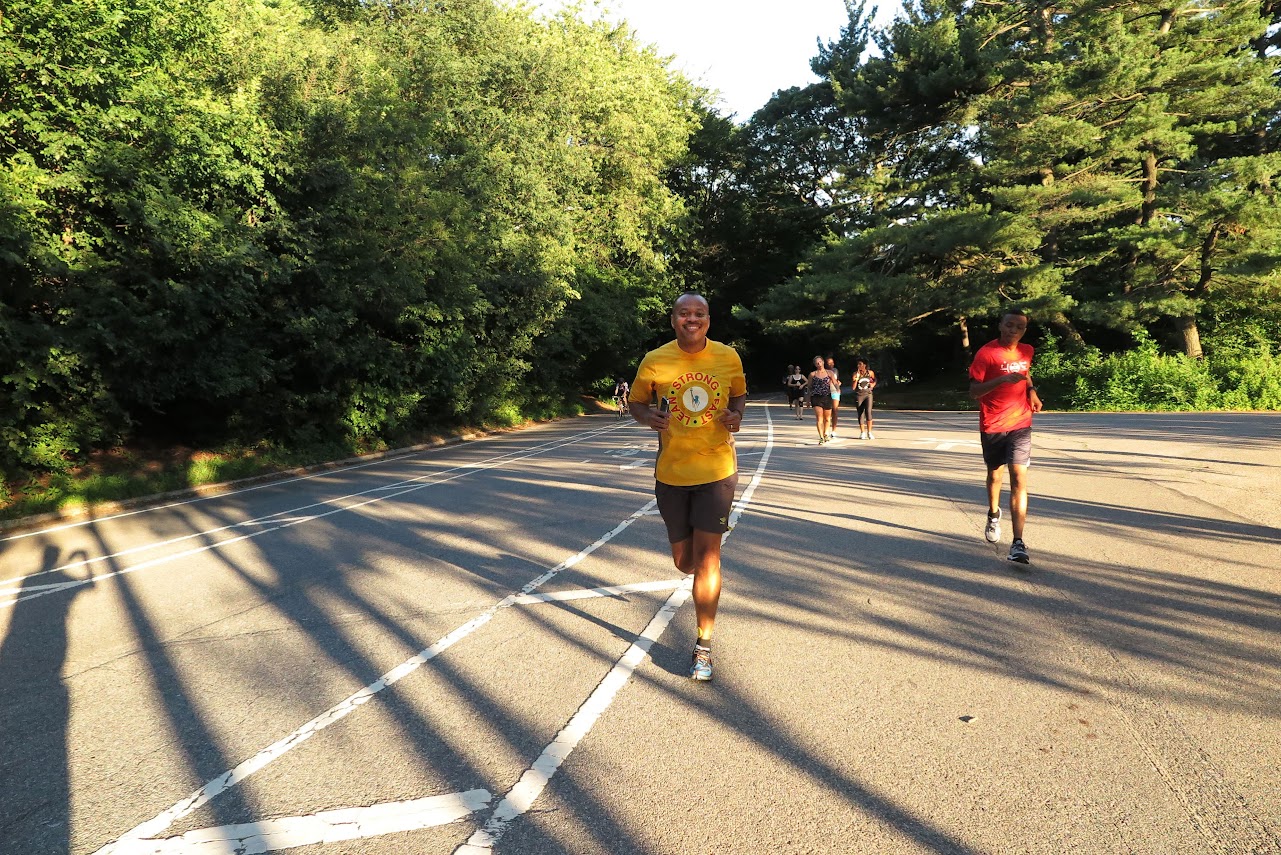 So all I had to do is take a 2h45 hour train ride to Manhattan, check into my hotel, figure out what subway to take and get to Prospect Park by 6:30 pm or so. 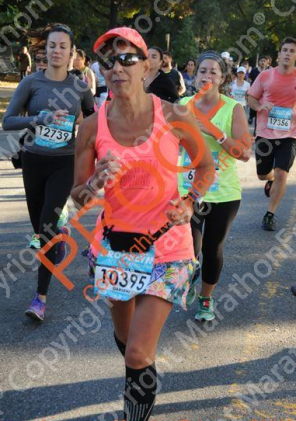 I have run in Prospect Park once before for the RNR Brooklyn Half Marathon and I remember it being very hilly – like Central Park.

Below is the course map. However, I didn’t remember where the hills were…

But no worries. This was purely for another racing experience and hopefully a fun one.

So this time, there were no snafus in getting to the city from Albany. No problems with the hotel.  All I had to do was figure out how to get to the race.  No one at the hotel was helpful.  I wanted to run over the Brooklyn Bridge and then go to the race.

F train to the B train

Unfortunately there didn’t seem to be a way if I did that I could also get to the correct subway (at least I wasn’t sure how to) to get to Prospect Park.

So I played it safe and took 2 subways and arrived at the entrance of Prospect Park.  Very Early.

I walked over to the Botanical Gardens across the street but they were already were closed so I just walked into the park.

I had no idea how to get to the race start in this huge park but luckily I bumped into a race volunteer whom I followed.

I did a little exploring before I got my bib. 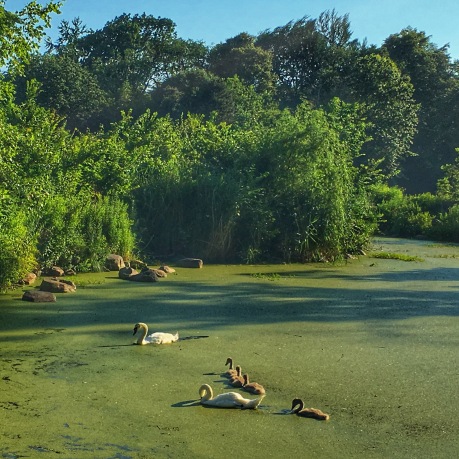 yes, that algae is pretty disgusting

Finally I headed to the Lakeside Center (where there were local kids cooling off in the pool/fountain) to get my bib. 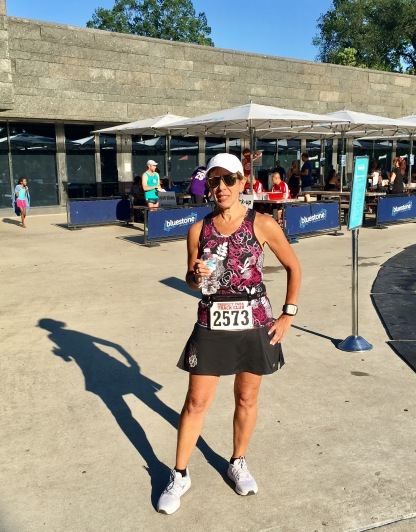 I was able to check a bag, use the (real) restroom, get some water and relax at a shady picnic table. 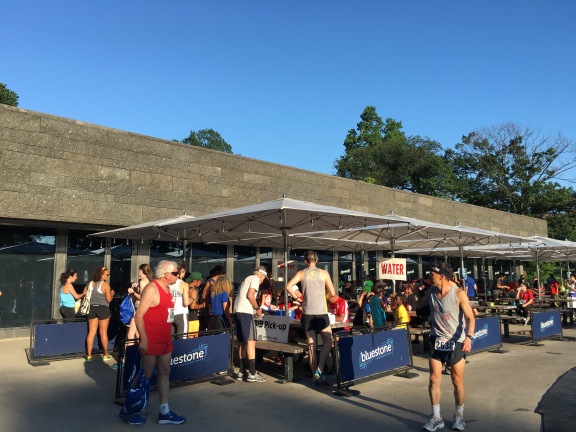 It was still an hour before the race was scheduled to start so that’s exactly what I did.  It was very warm (in the mid 80s) and I made sure to drink water to remain hydrated.

Little by little, the runners arrived.

Definitely an interesting experience running in a new place where I knew NO ONE!  The runners all seemed to look like the stereotyped “serious runner”.  You know what I mean.  (Later I would notice that 25 of them finished with less than average 6 min pace per mile!!)

Finally it was time to migrate toward the start in the park.  It was quite a walk (close to a mile, I bet)

heading to the start

This year for the first time, the race provided chip timing. I still lined up not too far away from the starting line.  Then chatted with some runners about the race. I found out that it started with a long uphill (but not steep like CP), then there were rolling hills and eventually it looped back to finish. 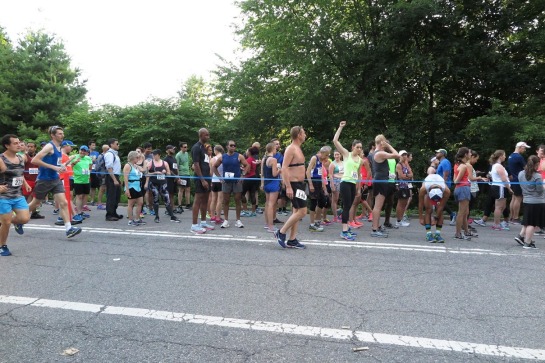 looking bored while waiting to begin

I should have warmed up but I didn’t And after sitting on the train for almost 3 hours, 45 min on the subway and then sitting at the café, my legs were stiff.

I started running the first mile and I just couldn’t get going. Or maybe it was the heat or the uphill, but I was running so slow.

Mile 2 was better but there were no water stops.  You had to stop at a water fountain in the park.  I did not and by mile 3, I was crashing.

I had a walk a few times but when I saw the clock at the finish line, the competitive me came out.

I got up enough energy to sprint and finish a few seconds over 28 minutes (which turned out to be 27:52 chip time.)

No water at the finish line.  You had to walk back to the café.  So I just sat in the shade for a while to catch my breath.

Once I felt better, I started walking following the runners.

Well, it turned out they were leaving the park.  I was walking in the WRONG direction.

I had to return to get my bag and I wanted to check the race results.

By this point, I got a second wind and ran back to the finish and to the café.

I checked the results and was surprised that I was FIRST in my age group.

I didn’t have to wait long before they started the awards ceremony.  The finish times were amazing!!

And the founder of the race, Al Goldstein was there and took a photo with each winner. 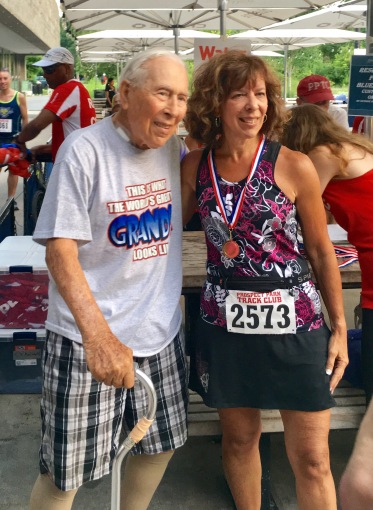 We chatted for a while.  It was her first summer series race. She was babysitting her daughter’s apartment nearby. And she was nice enough to walk me to the subway.  (A much shorter walk if you entered at the right entrance.)

It was late by the time I got back to my hotel. (And I got to see the Brooklyn Bridge from the subway as we rode outside over the East River!)

But I did enjoy my first Brooklyn 5k!!

Since it’s Friday, I’m linking up with Running on Happy & Fairytales and Fitness for the Friday Five 2.0 linkup! Join in! Don’t forget to link back to your hostesses and visit some other bloggers.

My topic for this Friday is: Why Run an Impromptu Race is a New City

Of course, I was tempted to relax in my hotel room, enjoy a nice meal in a restaurant, visit a museum or even take in a show.

But I am glad that I took on this new adventure.  (Nothing ventured, nothing gained, right?)

Happy Running! Ever run a race solo in an unfamiliar place?