At my former job, I ran this race once (in 2011), the only year I convinced them to have a team.  It was fun so I signed up to be part of a team at my new job two years ago. We didn’t actually have enough runners for our own team so we partnered with UAlbany. I ran it with this team last year, as well.

It is actually more of a run than a race.  With 10,000 participants and many walkers, you feel (at least I do) no pressure to do anything but finish.

So when I finished work at 4pm, I ate a bar and a banana and hoped that would be enough.

The weather was a little warm (70) but at least we had a day without rain. I had woken up that morning with a headache and stiff neck. My neck was still stiff but not enough to prevent me from running a race.

My team was very organized. Again this year, they had set up a tent with water and refreshments.  I walked around for a while searching for the tent but finally located it (in a place not far from where it was the year before.)

I had already picked up my team tee and bib during lunch at UAlbany.

But I wore the shirt from two years ago but only put on this year’s team tee for a pre-race photo. It was too big again this year (Unisex!!)

I think I missed the photo but it was pretty much the same cast of characters as last year plus or minus a few.

While waiting for the race to start, I chatted with those that I knew from work. We chatted about running, of course and made plans to go out after the race.

We eventually headed to the start. With a cap of 10,000 runners every year, this year, they decided to add corrals.  I was in the second corral (LIME green). We pushed our way in (as predicted many ignored their correct corral) and moved up as far we could.

And then just waited in the crowd.

Two years ago, Sawyer Fredericks (winner of The Voice and a local) sang the National Anthem. This year, it was an unknown local.

The biggest problem with this race was that unless you were in the front and very fast, it was impossible to gain any speed.  Even with the corrals, I was playing bumper cars the whole race. It seemed even more crowded this year even without the walkers in front of me. So middle of the packers, like me, just weaved in and out, bumped into people saying “excuse me” though out the entire race.

My neck was stiff and the sun in eyes.  I was too warm. Plus so many cracks in the pavements to watch out for (In fact one of my co-workers fell during the race).

I think it’s a great thing. So I tried not to get annoyed or take it seriously. It helped that I ran much of race with a running friend (until I lost her), listened to music and soaked up everyone’s excitement.

The course continued through the park with rolling hills – one or two being rather steep but I didn’t walk.

There was a water stop that you passed twice.  I ran until the first stop and then I walked.  I walked again at the 2nd water stop. I walked one more time at the mile 3 sign.

Eventually, you headed toward that downhill finish.  I was tempted to go into an all out sprint but it was a steep downhill so I had to hold back. 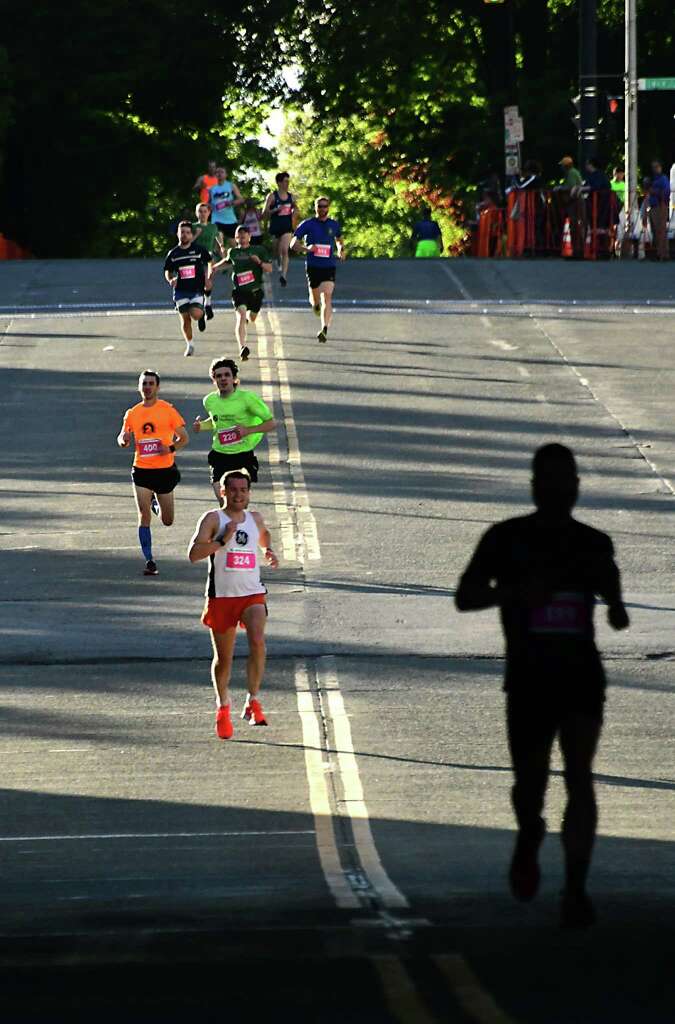 When I saw the clock in the distance, I picked up the pace so that I could finish under 33 minutes.

Then I slowly made my way back through the crowd to the tent and my co-workers. This year again, they had a huge spread for us  – cheese, crackers, humus, salsa, chips, marinated veggies, fresh fruit, etc.

I was very impressed by the race organization again this year.  After you picked up water, you proceeded to a tent to get your time.

I, however, had to make the long walk back to my car…and my stiff neck was even more painful than before the race so I decided to go home.

It made me smile but I quickened my step to get to my car since it was getting late.

The highlight of the evening was chatting with co-workers and meeting new runners.  Getting in my last run before my half marathon was just gravy.

No age group awards given but I would have placed 2nd.

I am glad to have participated in this race. It is run by a local running club and they seemed to try to improve the race each year. This year, for example,

I definitely plan to run it again next year.