You all know how much I love Lake George (at least in the summertime).  Well, this race gets me up to the lake in the winter.  Ex-blogger Andrea (now runner friend) and I had run this race together SIX times already. She had run this race 12 times!!!

I was injured in 2012 and couldn’t run but AJH did snag another award. 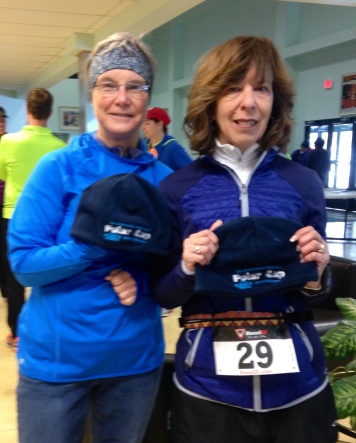 another hat for AJH but my first.

Andrea signed up, of course, again this year and I was looking forward to seeing her.

But then a few weeks before the race, I stumbled upon her daughter’s post on IG:

My faith in the universe has been totally rocked but my faith in my mother is more ironclad than ever. This strong and tenacious woman ran her first marathon the year she turned 50(!), beat me by 20 minutes during my first 26.2 mile jaunt(!), conquered her maiden triathlon at 60(!), regularly rides 40-50-60-70-80+ miles on her trusty blue bike(!), read 171 books last year(!), and now she’s one big surgery into beating cancer. She’s the very greatest bad ass I know and I have no doubt that she’s gonna absolutely pulverize this fucking cancer, with even less mercy than she showed me when she left me in her dust on the Marine Corps Marathon course.

And yes, it brought tears to my eyes. It rocked my world, for sure.

I started reading her blog when I started running. She inspired me from the beginning. We are the same age exactly!! But she has run longer, farther, faster…even has competed in triathlons.

We met face-to-face for the first time at a race in 2010 and since then have completed in many races together (in addition to this race 6 times). I have even stayed at her house in VT twice. 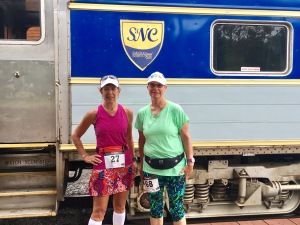 She has also come to my area each year to participate in a duathlon. I have always come to the race to cheer her on. 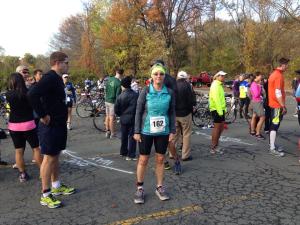 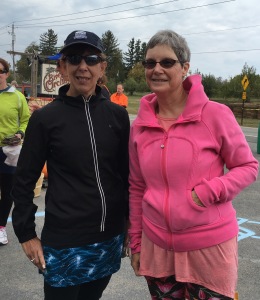 So I ran this race with a heavy heart. I ran it for Andrea. 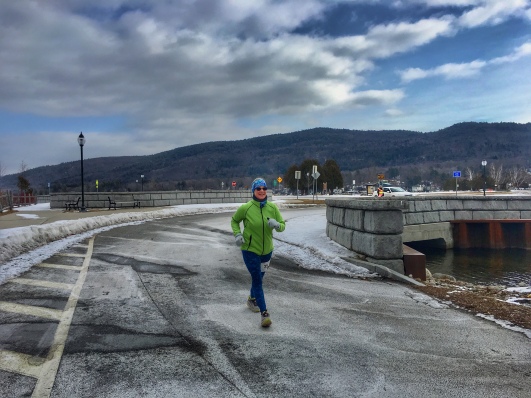 Back to the race recap…

The thing with this race, you never know where it’s going to start and what the course will be (besides hilly.)  Two years ago, they changed the course for the third time. 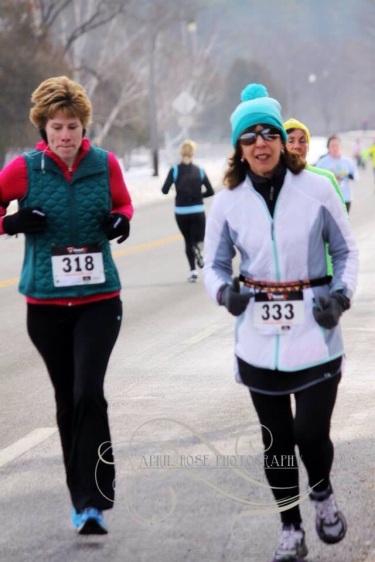 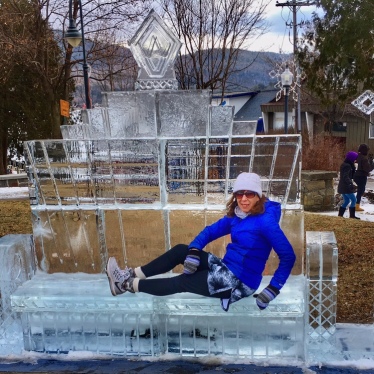 I have not been doing any speed work at all or running on any hills. (Um …do I ever? lol) My runs on the weekend have been longish. So as usual, I went into this race with no expectations other than to have fun and stay healthy.

When I woke up, I checked Lake George’s weather and saw this: 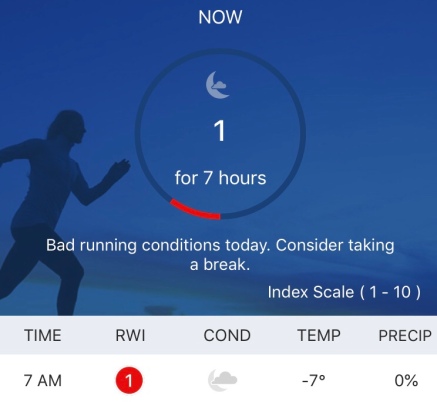 yikes! And no I didn’t consider bailing!

So I bundled up in my usual running layers (2 shirts, DIY arm sleeves, vest, skirt/tights, gaiter, beanie, mittens). One of my running friends, Barbara, also wanted to run this race so we drove the hour ride up to Lake George together. It was nice to have company. 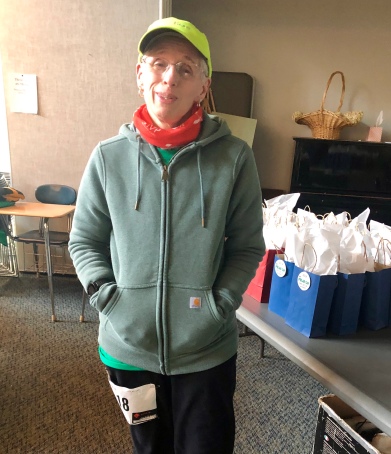 We arrived around 9ish and got a great parking spot in a nearby parking lot.

Packet pick-up was again at the parish hall of the church in Lake George.  This newer location was warm and had restrooms which is always a plus.

another cotton t-shirt to give away

Eventually runners did arrive and I chatted with some whom I knew until Andrea arrived. She is hard core – drove over 2 hours from VT since her doctor said that she could walk the race. Yes, in addition to hard core, she is definitely Badass!!!

We waited until the last minute to go out into the cold. We had to walk quite a ways as the race started in town by the lake. (Since the race repeated its course, I will re-post some of my pics from previous years. It was too cold to take any))

There was no real starting line and the race was not chip timed. Even though I ran the race last year, I didn’t really remember what the course was like so here is a map that I found online. 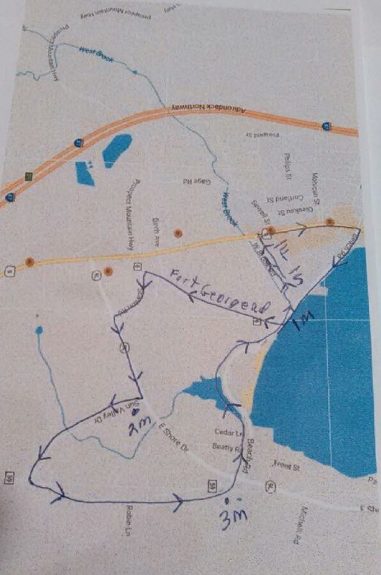 I am directionally challenged anyway so it wouldn’t have meant much to me even if I looked at the map before the race.

Luckily we didn’t have to wait long in the cold before the race started. There seemed to be less than 100 runners which is much fewer than usual (probably because of the cold temps.)

A lot of the course was a blur, as usual, but here’s what I remember. Rather than taking pictures during this race again, I’m posting last year’s as they did not change the course. 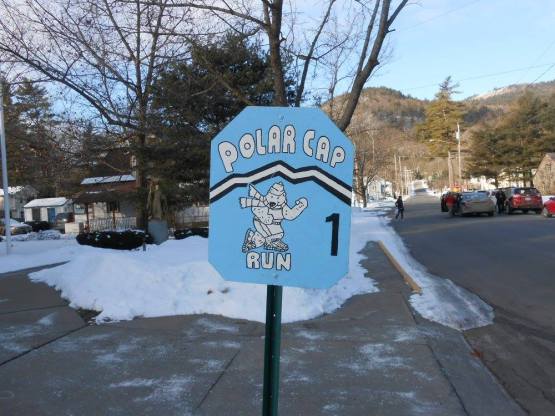 pic from FB – cute markers at each mile

The first mile started with a slight uphill and then it flattened out. I was cold (at least my face and lips were from the wind) and my legs felt very stiff since I hadn’t warmed up. I was ok with that because I wanted to start out slow.  I also found my stomach growling since the race started at 10 am and I had eaten 3 hours ago. I concentrated on the scenery and surprisingly, the ground was not as slippery as I feared. Still, I needed to pay attention.

I wore again my new “old” Garmin and I thought I fixed it to show pace.  But nope but at least now, it does measure the pace which I looked at after the race. 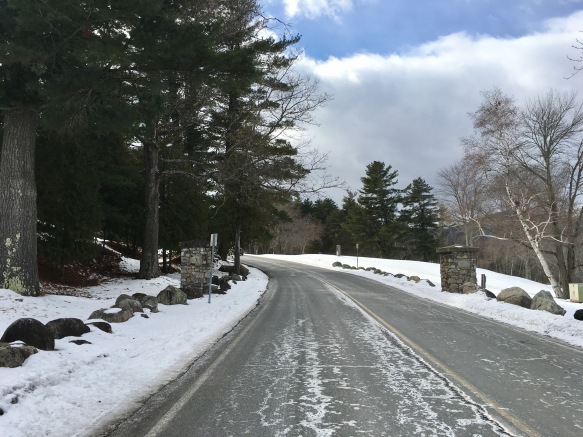 Mile two started where the race used to start and than meant a steepish hill.  I told myself to be smart since I had a half marathon in ONE week and I never run on hills.  However this time, I pushed myself to run slowly and not walk.  It was practically a crawl and I did it. At this point, I was actually thawing out.  In fact, I felt warm.

The longest and biggest was at mile 3 and although it was only 1/2 mile, it seemed to go on forever.  This time I walked/ran it. Afterward we were rewarded with a nice downhill. I am always hesitant to go all out on the downhills so many runners passed me by but that was better than getting DOMS. Believe it or not, I was so warm that I unzipped my vest and took off my mittens.

Finally for mile 4, we ran along the lake and back into town.  At this point, I wanted to be done and picked up the pace. Luckily the hills were finally over. I didn’t care about a PR but I secretly want to win an AG award.  But I had no idea where the other runners in my AG were in at this time in the course.

Understandably (due to the weather), there were fewer volunteers than normal.  There was a point along the lake where there was a roundabout and I had no idea where to run.  I stopped and called to the last volunteer and asked which way to go.  He told me and I ran a little more and then was confused. I turned back and he gestured to continue straight.  I think I went the right way and eventually there was another volunteer ahead at the next to last turn before the finish line,

Barbara finished just a few minutes after me.  I thought about waiting around for Andrea but it was TOO COLD so Barbara and I walked back to the church together.

There was chicken noodle soup, bread, bagels, chocolate milk, fruit and baked goods – I am a sucker for home-made stuff and ate quite a few cookies and brownies (and chocolate-covered pretzels). I also had the soup and of course, the chocolate milk! 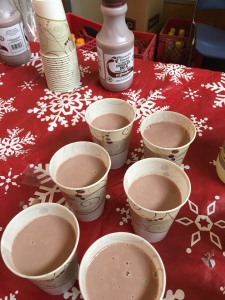 Due to technical glitches and the runners still out on the course, we had to wait around for the age group awards. It was quite a while so I chatted with a law professor that I used to work with and snacked on the refreshments. 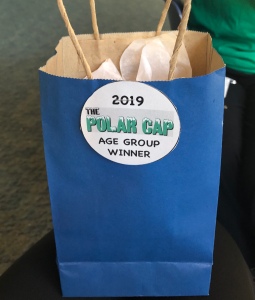 While Andrea was out walking the race, I mentioned to the race director that she had run this race 13 times and it was the only race that she has run EVERY year.

I think she was surprised and hopefully happy with the “Badass”award.

With 8 miles on my “training” schedule for the day, I debated about running more (for about a second) but it was TOO COLD. We did put on warmer clothes and walked into town to the Winter Carnival.

This was the first day of the event which is held every weekend in February.

they had a chili cook-off. but the line was too long and it was freezing

I said hello to my friend who was volunteering and then we walked back to my car and headed home.

As usual, I loved doing the race (even if it was cold). Small local races are the best and running one with a friend is just icing on the cake.

As you know, the Tuesdays on the Run link up has been retired. There is now a new link-up organized by Zenaida and Kim (Kooky Runner). The new link up is called Tuesday Topics.

Happy Running! Have you raced yet this year? How do you feel about cold weather races?