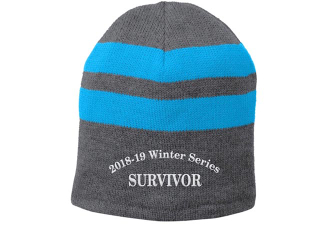 you get this hat if you run 4 races and volunteer at one – I’m in!!

Hudson Mohawk Runners Club sponsors FREE races every year throughout the winter for its members ($15 to join). There are FIVE races and I try to run in as many as I can.

The course is pretty boring but free is free.

And it’s like a reunion of all those runners who love to race.  I bump into runners that I know from races, training groups, previous jobs, etc.

The food is catered by Bountiful Bread so there are always delicious breads, soups, etc. There’s a clock at the end, volunteers at each turn and the miles are marked. Plus there are even age group awards.

I love these races.  They come at a perfect time of year. Not many other races are scheduled (unless you live in the South) and if you are racing, you can use these races as training runs.

This weekend, they offered distances of 3M and 15K.

Normally I would have run the 15k and used it as a long run but I ran a 5K race the evening before so I opted for the 3 miler instead. (Plus the speedy ladies usually run the longer distances so I thought I might snag an age group award of a loaf of bread.)

I signed up for all the series races at once this year. Since they were free, I won’t mind a DNS if the weather is horrible. It just saves time when you arrive, not having to stand in line to register.

The temps were around 30 so I wore tights, two shirts, beanie and gloves.  Though it was the same temps as the night before, it felt much colder due to the wind (always present on this campus.)

I left early to get parking since these races are often crowded and sometimes there are other events going on at UAlbany.

It turned out to be not as crowded as usual probably due the Last Run being the night before. Still there were over 100 for the 3 miler and 150 for the 15k.

I immediately bumped into some SRMs, some runners from the STEM group, from the Turkey Trot group, as well as other familiar faces from races. It was great to catch up with everyone.

We stayed indoors until the last second and then made our way outside.

The race is very informal – no bibs, no starting mat, no timing chips, etc. There are also no clocks (until the end) and no water stops (maybe for the 15k??)

I just told myself that this was simply a training run and just do it. And if my legs were not tired from the 5k the night before, I could use the race a speed drill.

As I mentioned, the course is very boring but it also has hills.  Not steep hills, just a few rolling hills throughout.  This year, I have tried to be better about the hills and not walk up all of them. In fact, I didn’t walk at all!!

New addition – this year’s pic (in the same location):

I ran the whole thing.  Not so impressive – it was ONLY 3 miles!! I have to admit, my legs did feel like they had run the night before. I had trouble getting up any speed at all.

But I did dress perfectly. I was warm & even took off my gloves toward the end.

Finally it was over and I sprinted across the finish line at 28:08

Reality may be setting in. Am I getting slower??? Two days in a row where my time was significantly slower than other years on the same course. Or maybe it was a bad weekend?  We’ll see what finish times 2019 brings in the shorter races.

I went inside to warm up and have some soup, bread, cookies, fruit, hot chocolate.  Not a bad spread for a free race.

They gave awards for the top 2 in each 10 year age group.  I was 3rd in my age group. Two of the speedy old ladies did run the shorter distance…Darn!

Heidi with Alyssa who had just finished the 15k

Two of the other Sole Sisters were running the 15k so Sole Sister Heidi and I went back outside to cheer them on.

Even though I hesitated, I am glad that I ran this race.  I plan to run the other Winter Series races too. Maybe again as a speed drill, following a Saturday long run(ish) or if the distance is long enough as a half marathon training run.

After the race, I had to rush home for my annual tennis holiday party.  And once again, though I ran 3 miles, I ate as if I ran a half marathon.

Happy Running! How you are enduring the weather?  Cold yet? Did you run this weekend? How about races? Any planned for this winter?