Apparently during the summer months on alternating Wednesdays at 7:10 pm, there is a cheap ($7.50 – in past years it was $5) 5k in Prospect Park, Brooklyn. These races are organized by the Prospect Park Track Club. I ran one last July and had a great time.

I was excited that they were scheduled again this summer and the first two races coincided with my the dates that I would be working in NYC.

We’re gearing up for another great summer of evening 5K races! You don’t have to be fast to enter, but these races will help you find out how fast you can be!
Big news for 2018: we have chip timing! All runners will receive their actual race time.
Races will start and end at the Bluestone Cafe at Lakeside Center.
There, we will offer:

There are also water stops during the race, mile markers, lots of volunteers, results immediately emailed to you and free photos,

So it seemed like a no brainer to run some of these races if I could.

Except for the fact that I had to work all day in Queens (getting up at 5:30 am and being on my feet until 4 pm). I would have to rush to take the subway, then the LIRR, walk to my hotel and change my clothes and then take a LONG subway ride to Brooklyn.

However, a bigger problem was that my foot (specifically the arch) had been sore since my vacation in Florida (Maybe playing tennis 7 days in a row wearing old sneakers??) I could run on it but it was painful afterward.  It hurt after my half marathon and after my run on Monday (two days before this race).  I wondered if I had PF?  I contemplated taking time off from running.  A normal person probably would have.  But running keeps me sane and I NEED to run.

So I decided to go for it hoping that this decision wouldn’t backfire and I would damage my foot and put myself out of commission.

As I mentioned above, I rushed back to the hotel from work and hopped the subway to Brooklyn.  Thanks to Google, I figured out which one to take and which stop to get off at.

However, when I exited the subway station, as I did last year, I did not exit at the exit for park entrance closest to the race start. Luckily there were signs and I followed them to LeFrak Center at Lakeside (where the bib pick up was). II had a scenic walk through the park. I passed the race start and end.

As I got closer, there were many signs pointing you in the right direction. 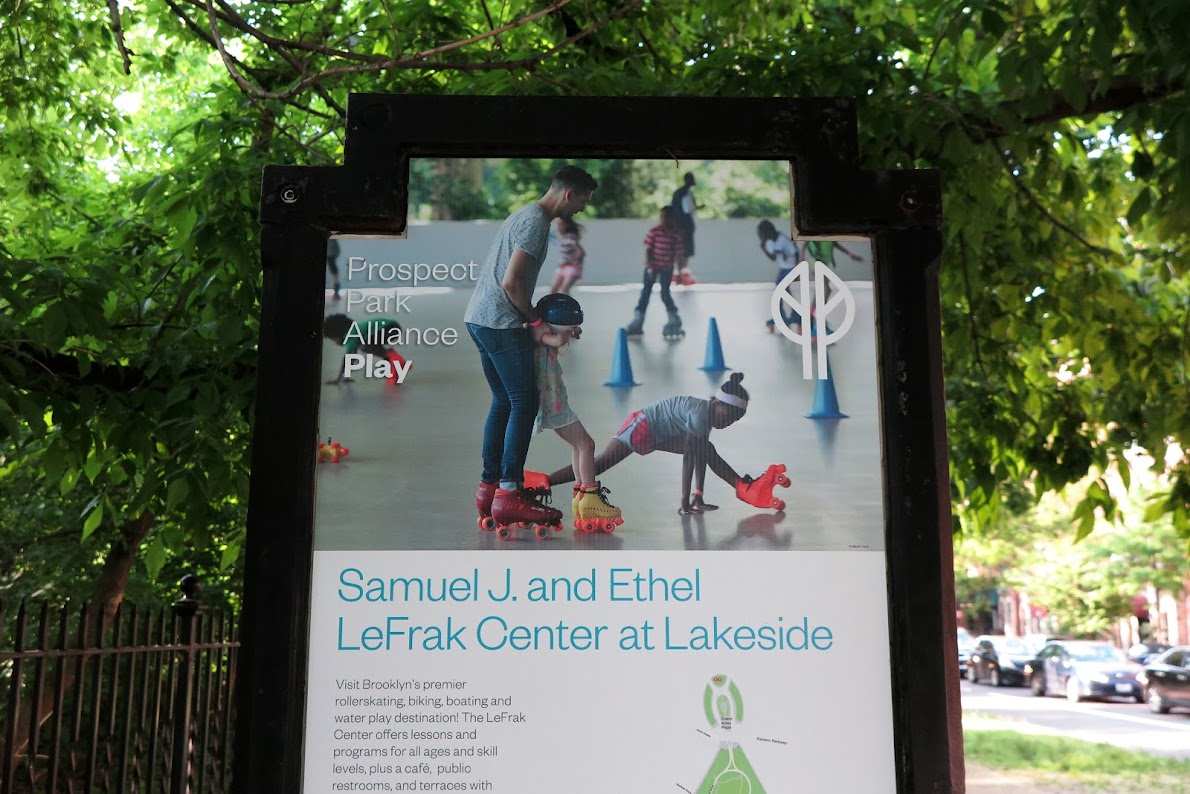 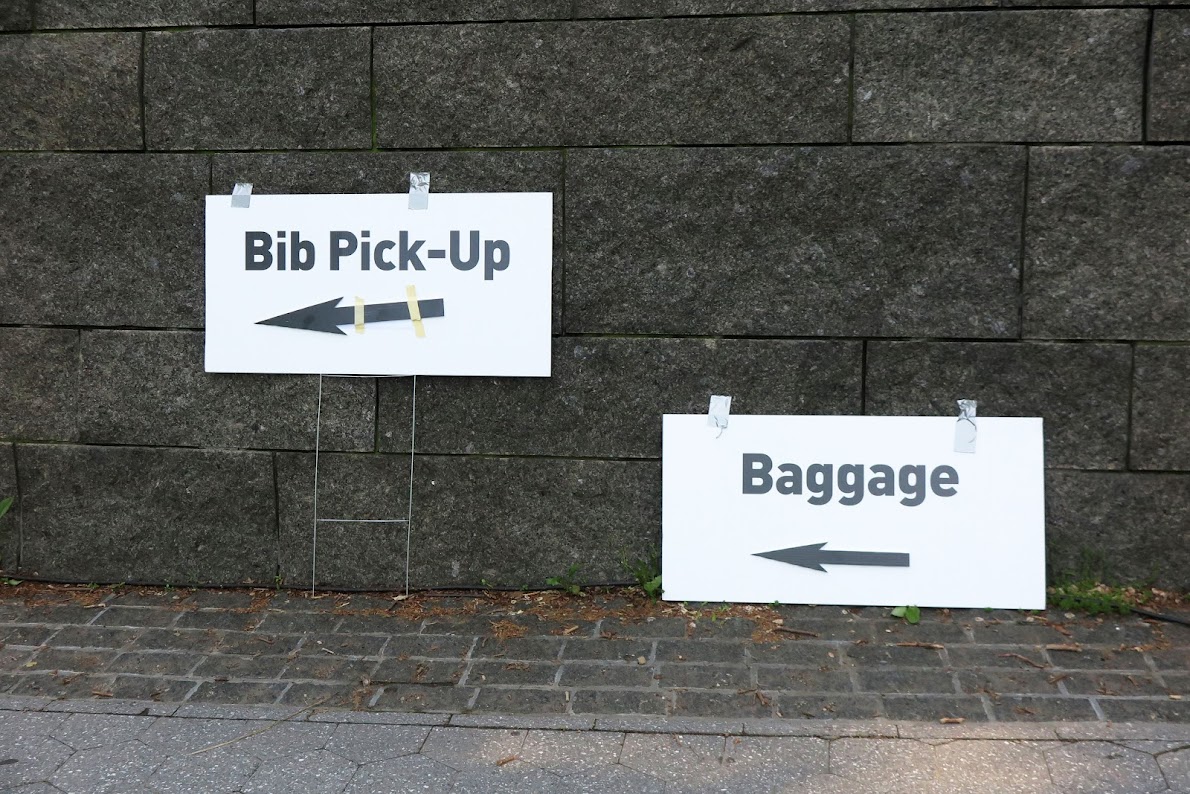 I was pretty early and it wasn’t crowded at all. 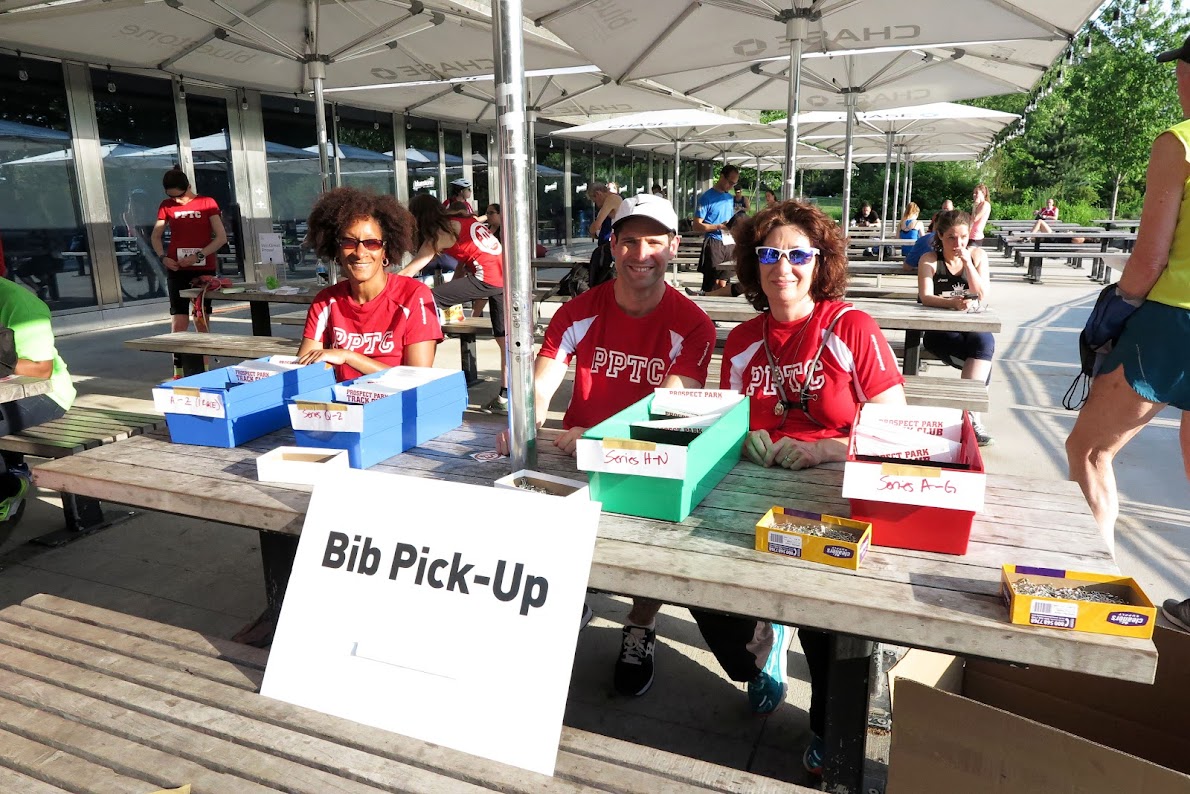 It was strange to be at a race where I didn’t know a soul.  But there were real restrooms, water and tables in the shade so I just hung out.

Eventually runners started arriving.  There were probably close to 500 hundred.

Soon it was time for everyone to walk down to the start. 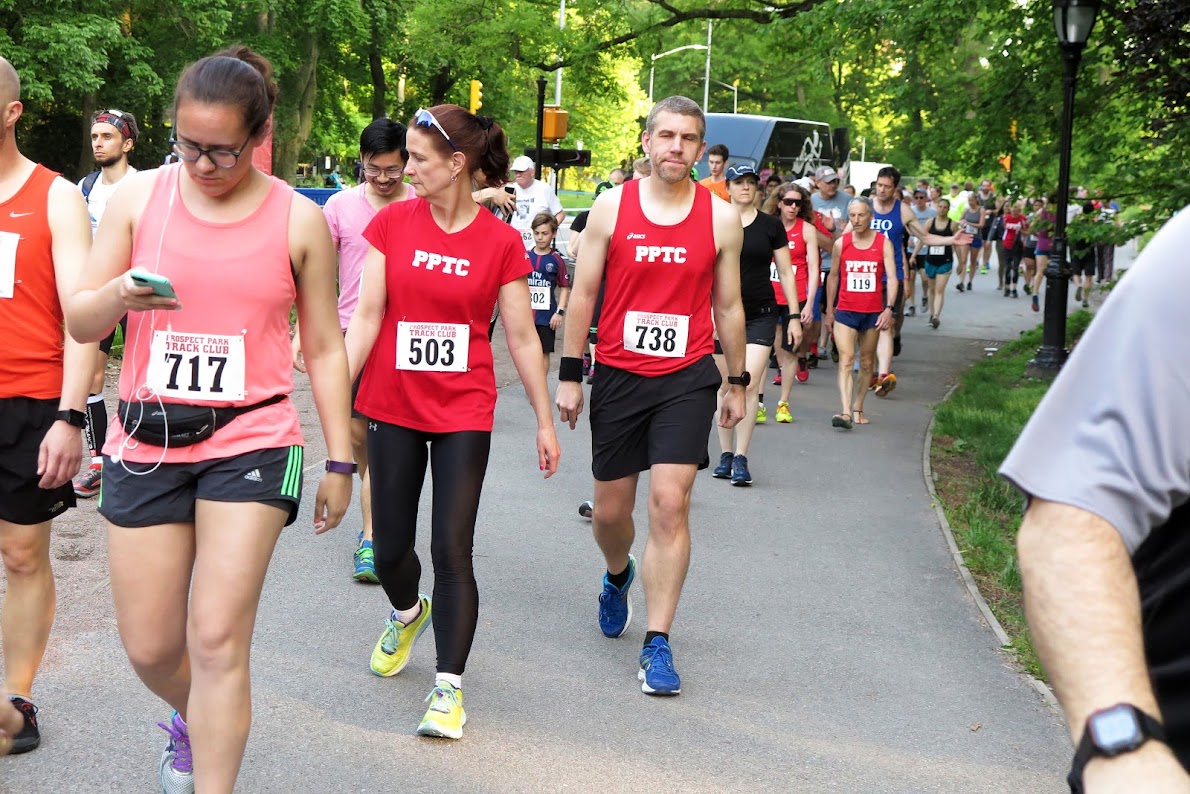 Before the race began, there was a memorial service for one of the track club members who had died.. 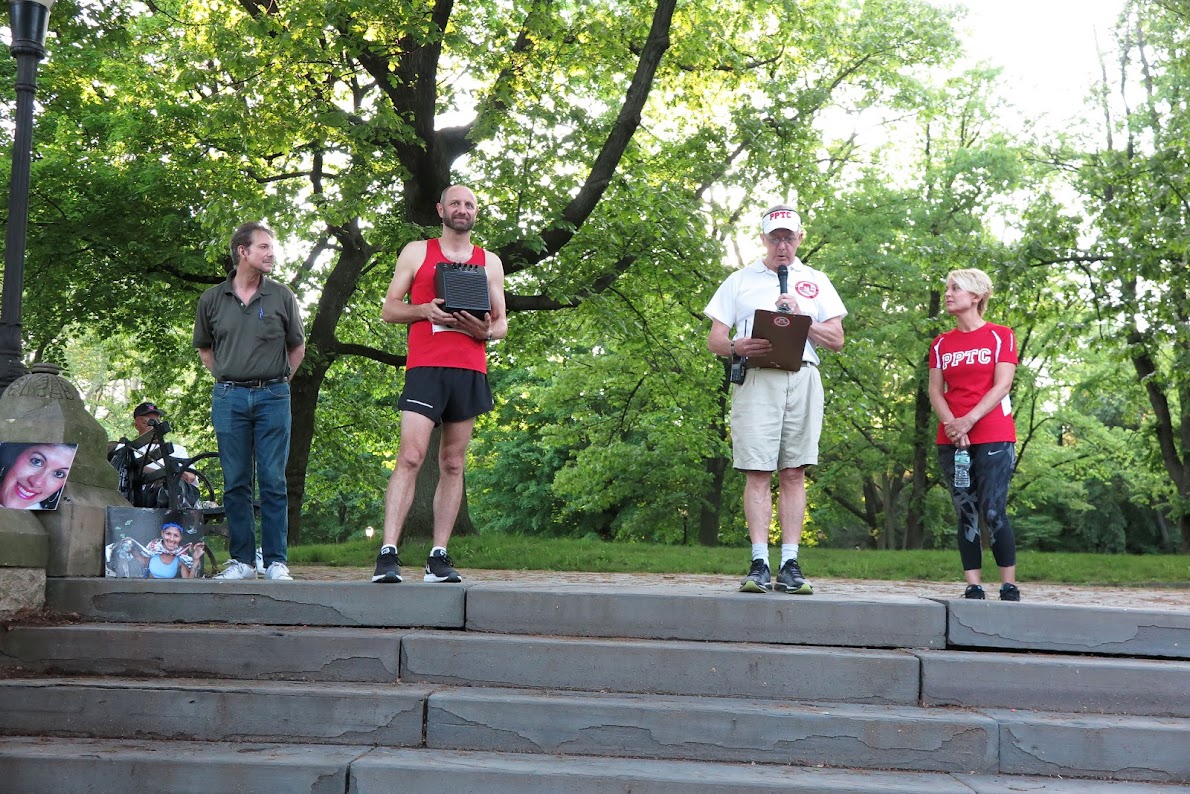 Then we all lined up.  No corrals or pace signs.  Just everyone all together.  It didn’t matter because believe it or not, this small local race was chip-timed. 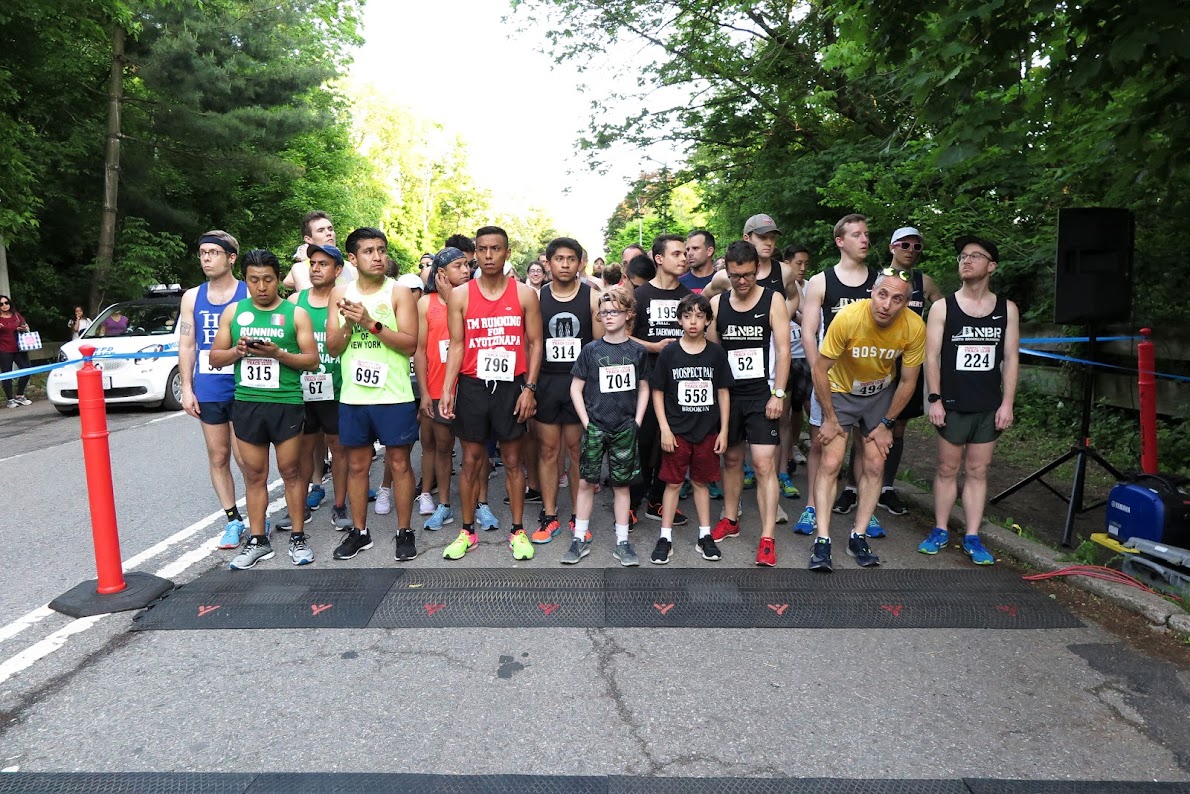 Below is the course map. I didn’t really remember the course from lat year but I did just run the Brooklyn Half Marathon several days before.  So I knew about the big LONG hill.

As I mentioned, there are usually 400-600 runners signed up of all ages.  The runners all seemed to look like the stereotyped “serious runner”.  You know what I mean.  (Last year, I noticed that 25 of them finished with less than average 6 min pace per mile!!)

It was also very warm – in the 80s and humid. That and my maybe injured foot, led to me to want to run a very cautious race. 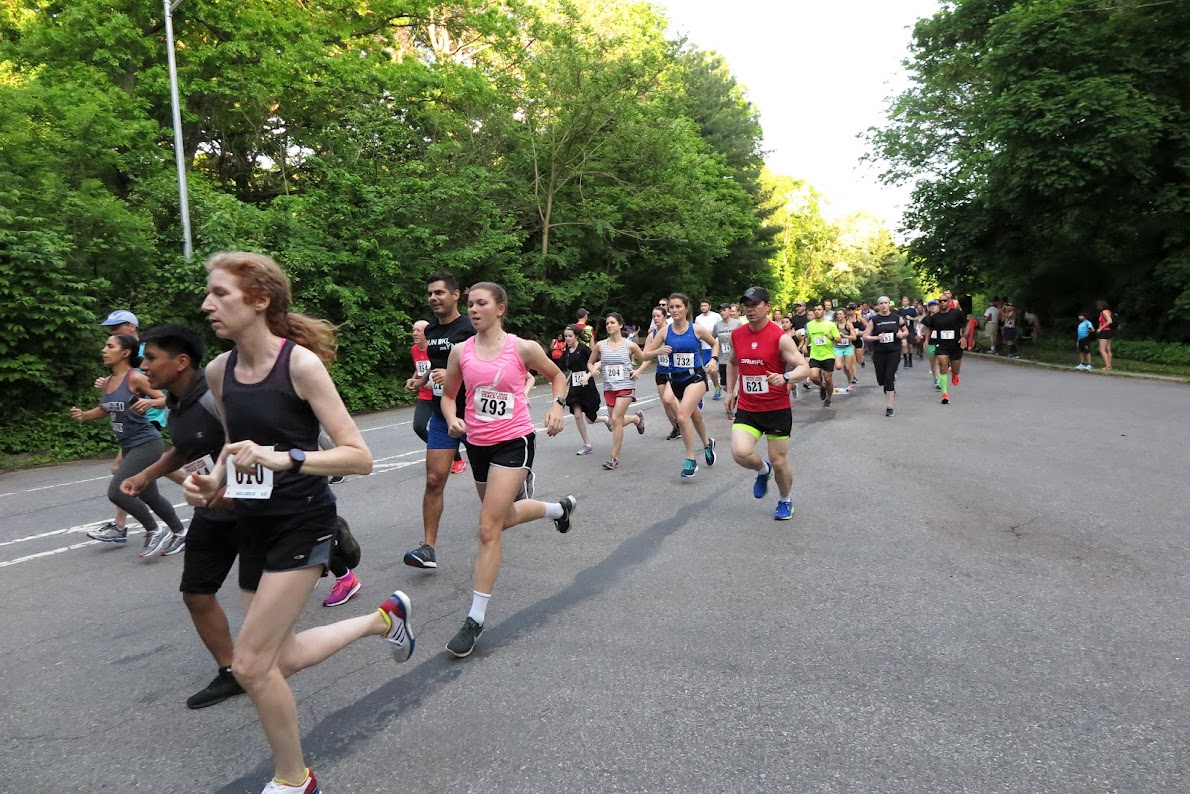 I started running the first mile and I just couldn’t get going. I had to walk a 1/2 mile in and then again at the water stop.  It didn’t help that the big hill was in mile 1. 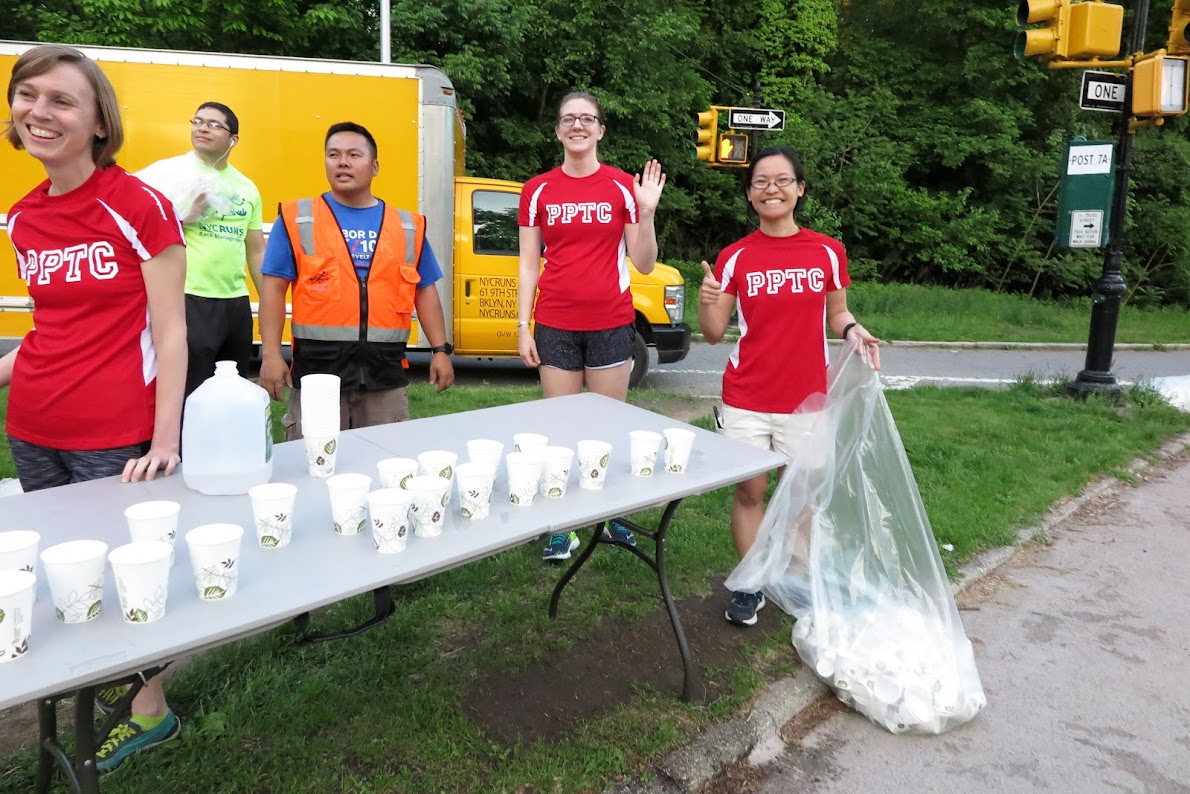 Mile 2 was better but there were no water stops.  You had to stop at a water fountain in the park.  I did not and by mile 3, I was crashing.

smiling for the camera, of course

I forgot about my foot and the competitive me was determined to pick up the pace.

I barely had enough energy to sprint and finished at 28:XX. 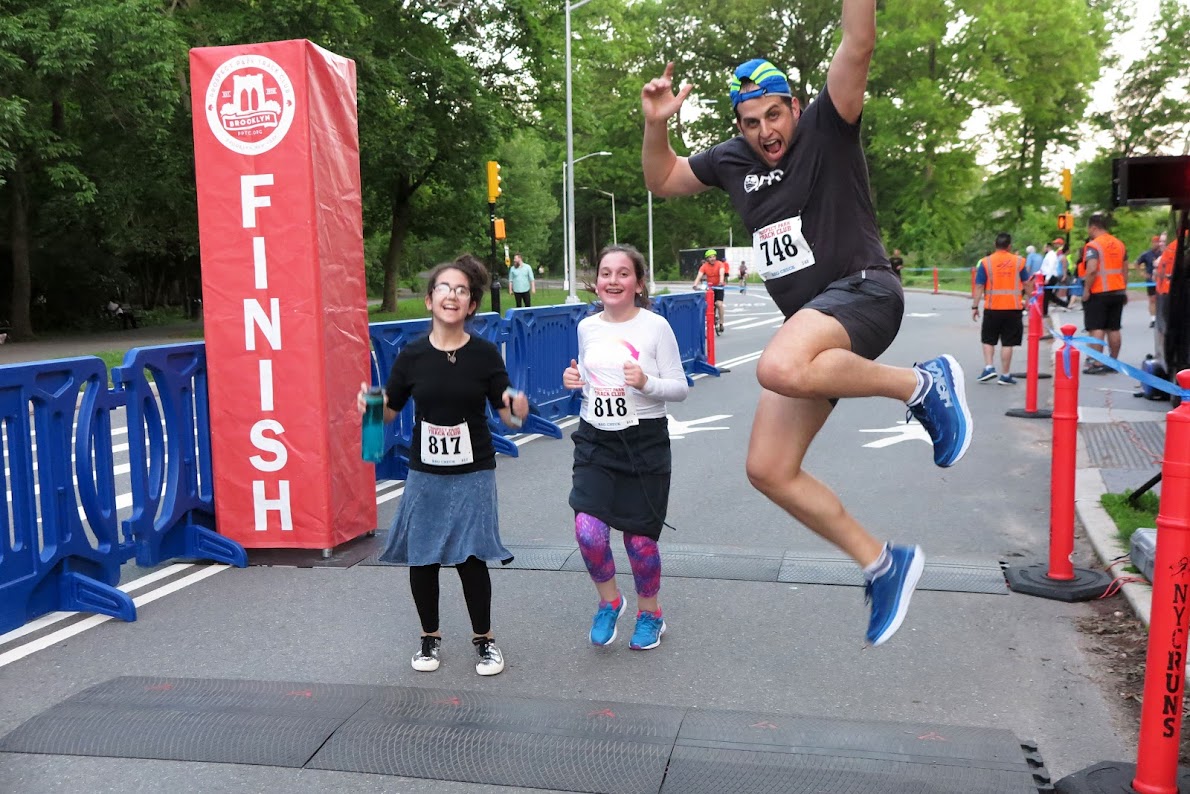 the last ones to cross the finish line

I was a little dizzy so I had some water and just sat in the shade for a while to catch my breath.

Once I felt better, I started walking back to LeFrak Center.

I checked the results and was surprised that I was FIRST in my age group. This is my first award in my NEW age group. (I would not have won in my previous age group.)

I didn’t have to wait long before they started the awards ceremony.  The finish times were amazing!!

As I was leaving, I asked a runner for the way to the closest subway.  He said that he’s walk me since he was headed to Manhattan as well.   (A much shorter walk if you entered at the right entrance.)

We chatted about racing, of course.  Turns out that he went to UAlbany and works for the same company that I train for in Queens.  Small world.

It was late by the time I got back to my hotel.

I did enjoy my second Brooklyn 5k!! I plan to do it again on June 6 (weather permitting.)

as soon as you finished the race, you got an email with your results.

So I haven’t seriously raced a 5k and finished over 28 minutes in a long time…maybe 2016. But I was elated that my foot didn’t hurt…at all. This sounds crazy but the race seemed to heal whatever was wrong. Phew!!!

yes, faster last year. we’ll see how I do next time.

Since it’s Friday, I’m linking up with Running on Happy & Fairytales and Fitness for the Friday Five 2.0 linkup! Join in! Don’t forget to link back to your hostesses and visit some other bloggers.

My topic for this Friday is: Why Run an Impromptu Race is a New City

Of course, I was tempted to relax in my hotel room, enjoy a nice meal in a restaurant, visit a museum or even take in a show.

But I am glad that I took on this adventure.  (Nothing ventured, nothing gained, right?)

Happy Running! Ever run a race solo in an unfamiliar place?