As you can see above, this weekend, they offered distances of 4.5M and 10M. They also offered (starting an hour earlier) a 20M and Marathon option. (No thank you!!)

Saturday, instead I ran 10 miles with friends. 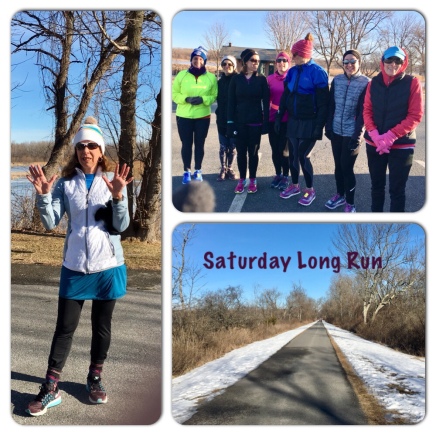 It worked out fine and it was great catching up. I enjoyed not running solo (although this time I ran most of my miles alone.)  The best part was that there was no pressure to race the miles and run faster than I should. And it was less windy than today’s weather.

Most runners would have then skipped the race.  But I decided to just run the shorter distance – 4.5 miles.

Run NOT race for free with other runners and also get free food.  Perfect, right?

I woke up to a few inches of fresh snow on the ground.  That made me a little nervous.  However, the roads are usually clear where this race is run.

The weather was warmer than the day before but it was very very windy and so it felt colder.

Barbara and I drove together. There was a high school track meet going on. So I had to drive to a farther parking lot. (Why does someone who can run 13 miles, balk at walking any distance to the start of a race?)

After a chilly walk, we arrived in time to register. (I didn’t register beforehand as I usually do because I was not sure that I would run the race.) I got to see Patrick, my running coach from the Turkey Trot. He was the race coordinator this week. I also chatted with a few other runners that I knew. However, the marathoners and 20 milers had already started and the crowd seemed to be a lot smaller than in previous races. 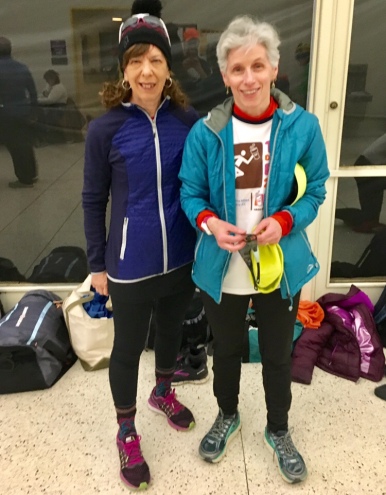 I decided to take off my fleece vest under my jacket and hoped that the sunshine would keep me warm. We stayed indoors until the very last minute and then made our way outside.

new fresh snow on the track

The 4.5 milers and the 10 milers started together (though the 10 mile racers obviously ran the course twice and more).

We started out in the middle of pack and it was slow going for a while. The road was pretty clear but you had to look out for potholes until we left the campus.

I was ahead of Barbara for a short while but then she passed me by and I never came close to catching up to her.

It was interesting when all of a sudden while I was running my pace, the 10 milers sped by me.  Then, there were times that the 20 milers or marathoners were speeding by me.

But I trudged along and kept moving forward.  I was surprised that my legs felt pretty good and I was running at a faster pace than I expected I would be.  Still, I didn’t want to push it and get injured.

I was cold at the beginning but warmed up when facing the sun (and took off my gloves)but of course, it was chilly when running into the wind.  I felt that I dressed appropriately unlike the guy below:

in the 20s with strong gusty winds

As I was running, I was reminded about how uninteresting this course was and how many times, I have tun it. Besides being all concrete and parking lots, it seems that you are constantly going uphill but never enjoy as many downhills.  (But I’m not complaining. It’s a FREE race!)

Believe it or not, I didn’t walk until the last hill. The wind was insane throughout most of the race but during that last mile, the gusts were so strong that I felt like I was moving backwards. The wind was tiring me out.  But actually, it was easier to push through the wind running slowly than walking.

Finally we approached the campus, and they said 4.5 milers go left and 10 milers go straight.  I was so happy that I had chose the shorter race. I couldn’t imagine fighting that wind for 5.5 more miles.

When I saw the finish line clock, I was shocked that it read 42:xx!!  So I forced myself to sprint so I could cross under 43 minutes. (My finish time was 42:55)

A much slower time that I am capable of. But I was very happy that I felt fine and nothing hurt. I was able to keep my relaxed pace the whole time and I didn’t try to race. Believe it or not, it was my fastest time on this course.

I went inside to get warm and to grab some refreshments – some hot vegetable soup, bread, fruit and then hot chocolate and cookies.

I also met a local Skirt Sports ambassador. We had been friends on IG and didn’t realize that we lived near each other.

They gave awards for the top 2 in each 10 year age group. I WON!! Barbara won an award as well.

So I did what I set out to do – run some extra training miles.

I was glad that I ran the race. My pace was not as fast as if I were really racing it (my miles were in the 8s that last time on this course) but definitely a lot faster (and more enjoyable) than running alone.

And my next race will be the BIG ONE!!

Happy Running! How you are enduring the winter? Did you run or race this past weekend? Are advice for racing and fitting in long training runs?