This was my 3rd time running this 10K and my third time being part of the Turkey Trot Challenge training group.

I really enjoyed this race my first time in 2014 (in spite of the snowstorm) so now I look forward to this race every year.

Then last year, I decided to run both races – the 10K and then the 5k.  Why not? I was already dressed and ready to run.

The weather was a lot better and I had a blast even though my finish times were not great.

The course was the same again this year.

I picked up my bib on Sunday so I didn’t have to rush on race morning. 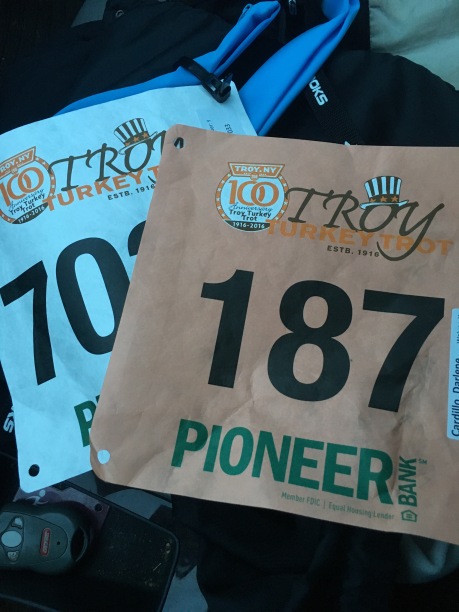 But I did want to arrive early to get parking. I parked in the bowling alley parking as I did the previous two years and walked a few blocks to the Atrium where I could wait for the race to begin.

I checked my jacket and shirt & 5K bib since I wouldn’t need them until after the race.

At least this year, it hadn’t snowed the night before. Plus the predicted rain/sleet didn’t happen :). It was cold and cloudy in the 30’s but no wind. And of course, you had to be careful not to overdress because you will get too warm.

long sleeve shirt under my jacket and yes, I was too warm.

I chatted with members of my training group and some other friends until it was time to brave the cold.

inside the Atrium – photo from the TU

The 10K started at 8 am followed by the kid’s one mile race & a one mile walk and then at 10 am the most popular event, the 5K.

Last year, I had problems with my Garmin so I made sure to turn it on early. I squeezed into the crowd at the 9 minute pace group with Susan and Joan from my training group. I knew Susan from way back.  I used to play tennis with her and her husband on Sunday mornings.  It turns out that her daughter sang the national anthem and her husband was the race announcer.

My plan for the race was to not to start out too fast and to run at an even pace and to save some for the last mile. (You’ll see that I didn’t keep to that plan…)

For some reason, this race seemed a lot more crowded than last year. For my pace, it never thinned out. I was running in a crowd the whole race. My legs never seemed to get going. I just couldn’t run fast today.

a pic from a previous year

The course is pretty flat. You run over the Green Island bridge twice near the beginning and then run through Troy before you turn around and run back.

There was a some crowd support. (More for the 5k.) There were even guys handing out bottles of beer.

I saw an old tennis friend who was volunteering and I high fived her twice.  A former student (and runner/blogger) passed me by. That was cool since we have never run the same race before.

There were quite a few water stops. I skipped the first one and even the second but I questioned my judgment because I was dying for a drink by the 3rd one.

Timing clocks were placed at every mile. I didn’t have to look at my watch to know that I was slow and had NO chance of a PR. I wasn’t sure that I could even finish under 1 hour.

Finally, I stopped to walk at the last water stop. It was a little after mile 4. I walked for a while. I thought about taking a GU to give me some energy but since my stomach felt off the whole race, as well, I changed my mind.

This walk gave me a second wind but it didn’t last.  As soon as I passed the photographers, I started to walk.  I wanted to at least sprint through the finish line. Unfortunately some of my friends were watching and yelled at me to stop walking and run.

As usual, it seemed to take forever to run the last .2 miles….

Not a PR but really a decent time and faster than last year so I tried not to get too bummed about it.

This year, like the previous year, I signed up to run a second race, the 5k about an hour later

doing a power pose for our friend Dr. Tom

So I got some food (and some chocolate milk) though I wasn’t really hungry and then checked out the results.

So I walked back to the Atrium. Boy, was it crowded… 5 thousand or more runners squeezed into a small building.

I just wanted to find my friends and rest my weary legs.

I had already picked up my bib but I needed to get it from my checked bag. And I was so sweaty that I wanted to change my clothes. (However, I decided just to ditch my gloves and my jacket and add a another shirt.)

I did find my tennis friend and we hung out until it was time to line up. 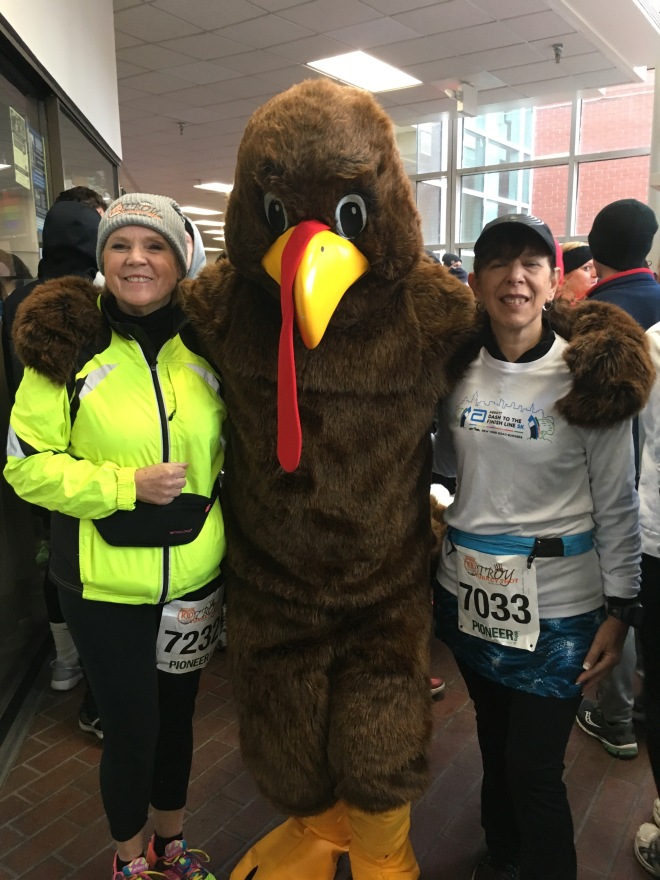 This was the second time that I had run the 5k race.  It was just an out and back course and you didn’t run over the bridge at all.

Finally it was time to get into the starting area. You were supposed to line up by color but we just squeezed in anywhere we fit.

pic from a previous year

Of course, my legs were tired from having already run 6.2 miles (at race pace) so all I wanted to do was finish.  I was hoping to come in under 30 minutes but I wasn’t sure that was possible. I didn’t want to push it since I had a half marathon to run in a little over a week.

The 5k is the fun race.  Many runners are dressed in costume.  Many families were running together.  There were walkers, etc. Everyone was there to have a good time.

photo from the TU

It was so crowded that I had no problem slowing down in the beginning. Like the previous race, it was crowded the whole race.

And my legs were not cooperating. They wanted to run slow. And so I did. And it seemed to be colder.  I was regretting leaving my gloves behind and taking off my jacket.

Before I knew it, the race was over. I actually stopped to walk at the same point as in the 10K.  I wanted to pass the photographers yet have enough energy to run across the finish line.

I crossed around 32 minutes which was 30:57 chip time. (Faster than last year so a course PR!)

I got some more chocolate milk and then went back to the Atrium to get my bag and meet my tennis friend.  We had planned to go out for coffee after the race.

So not to be a Debbie Downer…

Overall, I enjoyed the races. I am glad that I ran them. I think I will do both next year too.

After the race(s), we went out for coffee and we debriefed about our races.

Then later that evening, I ate back all the calories that I had burned off.

Happy Running! Did you run off that turkey?