I almost didn’t sign up for this race since I had already signed up for a 5k the next day.  Normally these two races are not on the same weekend.

But I have run this race twice before and I have enjoyed it.

Plus I’ve always won an award.

I am familiar with the course.  It is where I do a lot of my long training runs.

running here with Denise a few weeks ago

I tossed around the idea of running the 5k but in the end, I decided to do the 10K (even though it meant that at the race the next day I would not be in top form.) Basically because even if I am NOT doing my long runs, I need to keep my mileage up for my May 29  half marathon – the VCM  Relay.

No goals for the race but since it was my third time, I expected something like the past two years:

The night before the race, there was a free pasta dinner at packet pick up.

another unisex tech shirt that it is big!

The food was really good.  It was catered by D’Raymonds, a local Italian restaurant. There was salad, bread, pasta, wine, and lots of homemade desserts. It wasn’t a buffet.  They actually served you. I ate A LOT!!

Two years ago I got invited to sit with two lovely older runners.  We had some great discussions….about running, of course and have seen each other several times since.

This year, these ladies couldn’t come so I sat with some runners that I know since we run many of the same races. It was fun.

I may have over indulged

After dinner, I rushed off to play mah jongg (and stayed out later than I should have.)

I was  tired when I got up the next morning (and with an upset stomach) but happy that again I lucked out with the weather – sunny, no wind and cool (40s to start and 50s later). I wore a short-sleeved top, skirt, compression socks and brought a jacket just in case.

cloudy & chilly when I first arrived

I arrived early to make sure I got parking and to look for people whom I knew.  I found parking in the closer lot and then walked over to the start.

I immediately ran into Lara, a former tennis teammate but now running friend.

We hung out and chatted. What was great about this race was how many runners were there that I knew.  Some I hadn’t seen since last year.  It was like a reunion.

This race included a 5k and a 10k.  This year for the first time, both races started at the same time.

I started toward the front but not too near the fast runners.

I went out fast of course because I knew that I would slow down – bad attitude, right?

The course is lovely. You run along the Hudson River.

But I was already walking through the water stop at 1.25 miles.

This was a sign that the race would be going downhill. I actually felt nauseous the whole race. And my legs were telling me that they were not ready yet for speed.

Nevertheless, I willed myself to keep up an even pace until the turn around of this out and back course. (In fact, I was at 28:xx minutes at the 3.1 mile mark but I knew that I was tired and as usual, would slow down.)

You would think that there would be water then but nope not again until about mile 4.75.  It was warm and I was VERY thirsty. I complained to the volunteers like I did last year.

I wanted to eat some Gu to get more energy around mile 4 but decided against it with no water (plus my stomach was unhappy.)

I got 2 blisters during my half on Sunday.  I thought they were both healed and didn’t put anything on them.  Wrong! One was healed but the one on the bottom of my leg foot started to hurt…with every step.

So I dragged myself/limped to the end (which always seem to have annoying inclines.)

Lara & I run af the same pace.  Sometimes I beat her and sometimes she beats me. She was behind me the whole the race until the last mile.  Then she passed me by.  I tried to catch her to no avail.

As I approached the finish line, I sprinted in hopes of finishing under 59 minutes but did not.

I had some refreshments and waited for the results.  Homemade cookies, brownies and cakes – YUM!

I also began to feel better about my race.  My time wasn’t bad.  I beat my time from my last 10K (Troy Turkey Trot) and my legs hadn’t recovered yet from last Sunday’s hilly half.

I cheered on some friends who got age group awards.  This year, I did not!!

some old ladies are still speedy

So I really enjoyed the race.  Although I didn’t expect to PR, I probably thought I would win an age group award.  I need to adjust my expectations.

The weather was so perfect that I hung out with some older ladies for a while and went for a walk. (Especially since rain was in the forecast for the next day.)

I wound up walking 4 more miles.  That was 10 miles for the day so far.  (Probably not too smart with another race scheduled for the next day.)

My legs felt better as the day wore on… I even went grocery shopping and did lots of errands. Also picked up my race packet for the race the next day.

Since it is Wednesday, I am also linking to Deb from Deb Runs‘ Wednesday Word.

This week’s word is FEARLESS.

Just look at Katherine Switzer – the first woman to run the Boston Marathon (in 1967.)

and Bobbi Gibb who crashed the Boston Marathon in 1966.

What about Harriette Thompson who ran a marathon at age 92? 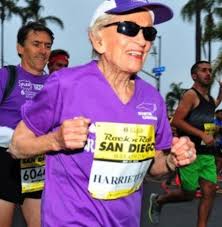 Now these women are FEARLESS.

I try to not let fear get in my way. I am a risk taker, to some degree. (At least with my running.)

And yes, I am running 2 races (a 15 and a 5k) again this weekend.
Happy Running!  How was your weekend? Did you run or race? Are you fearless?

14 thoughts on “Spring Run Off 10K Race Report & Being Fearless”