If you read my blog, you may know that I LOVE anything French!!!!

Well, I was a French teacher for over 20 years, spent my junior year of college studying in Nice, France and have visited Paris many many times (but not since 2000 😦 )

Anyway, I also love NYC and running in Central Park.

So it was a no brainer to sign up for this race.  I mentioned it to Sue who ran the Shape Half with me in NYC and she agreed to come along.

me & Sue the day before the Shape Half

Thank to numerous trips to NYC for work, I had enough points for a free train ticket and a hotel room for $99.  Sweet!!

Of course, I knew that the race would be a hilly one (see map below) but at least I would only have to run 4.9 miles since the race was only an 8K.

We decided on an early train on Saturday so we would have a full day in the city.

As soon as we arrived, we headed to the hotel to drop off our bags and then to pick up our race packet.  We walked, of course, and I didn’t wear flop flops this time.

I did wear sandals that are normally sooo comfortable and they were for a few miles until the blisters set in!!!

Packet pick up went smoothly and when we were done, we walked/limped back to the hotel.  (a mere 30 blocks).

As we checked into the hotel, a couple who was leaving gave us two unlimited subway passes. Score!

I changed into my race sneakers (reluctantly) and we hopped a subway to City Hall Park where we ate lunch and then walked across the Brooklyn bridge.  (If you never have, you should!!)

After our leisurely walk across the bridge, we walked around Brooklyn Heights and stumbled up the ferry to Governors Island.  It wasn’t part of the plan (actually we didn’t have a plan LOL) but for a $1, why not? 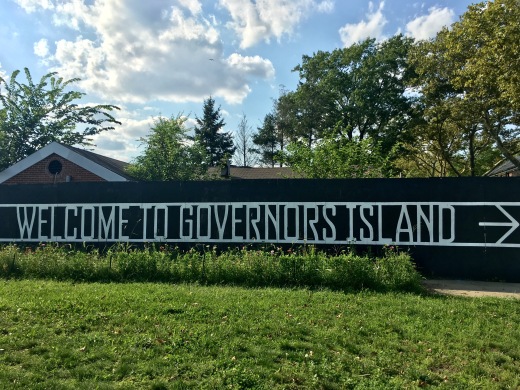 It was a great decision and I definitely want to return and rent a bike and see more of the island than we had time for on foot. (The last boat to return to Manhattan was at 6pm.).

notice that we both had changed into running shoes

Rather than returning by boat to Brooklyn, we took the boat to Manhattan and walked back to our hotel. 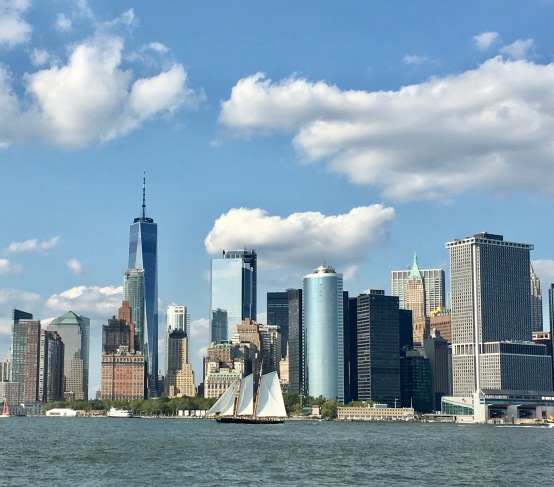 can’t complain about this view…

We had already walked 13.1 miles (on the day before a race) so we opted to stay near the hotel and found an awesome Italian restaurant to carb load (Yes, I carb load for 5 miles!) I had beet salad and pasta – both were yummy!!

It was such a warm evening that we sat outside until it was bedtime.

Flat D is ready to go

We got up the next morning around 5:30 am. Breakfast at the hotel did not start until 7 am.  Too late for us since we were planning on leaving the hotel at 6:30 am for our 8 am race.  Our hotel was so sweet that they packed us a breakfast to go – bagel, cream cheese, yogurt and an orange.

Don’t worry.  I didn’t eat it and had my usual oatmeal and coffee pre-race breakfast. We wisely decided to save our legs and grabbed a subway to the start. Plus, it was already 73 degrees at 6 am and HUMID!!!!!!!!!!!

we were quite early

We got there early, walked around the park and met so many friendly runners.

There were almost 5000 racers and the air was buzzing with excitement.

We used the porta-potties and eventually headed toward the corrals.

some runners did warm-up exercises – not moi!

They started at AA and we were I and K but we both decided to line up in I. We made a plan to meet after the race by the volunteer check-in (Sue does not carry her phone.)

The race began with La Marseillaise (loved this) and then our National Anthem.  It took us 8 minutes to get to the start line and we immediately got separated.  Sue used to be faster but now I run faster than she does.

Mile 1: We started on East Drive near East 67th Street and ran north, running UP Cat Hill. It was steep and I walk/ran it. This was a good thing because having a hill in the first mile, made sure that I didn’t start out too fast and die.  It was warm and I was sweating.  But at least, the route was shaded by trees.  I almost always made sure to run all the tangents.  Although, this was a big hill, it didn’t seem as intimidating as when I ran it as part of the Shape Half.  Even with walking, when I ran I was passing runners all the time.  Maybe because I started in corral I and was running with slower runners.  But it felt good.

Mile 2: Then we continued along East Drive and passed the Reservoir on our left. (one of my favorite places in the park to run.) 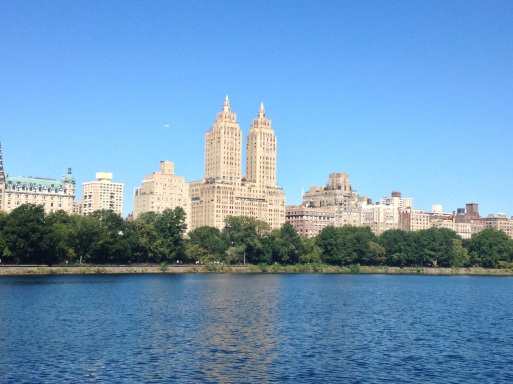 This mile wasn’t as hilly but it certainly wasn’t flat. Again, I was able to pass runners.  I think I missed the first water stop, but I made sure because of the humidity to stop and walk at every water stop after mile 1.  And there was one at every mile.

I wonder how long I was running with my skirt tucked into my belt???

Mile 3: We passed the 102nd Street Transverse on the left and ran down, then UP Harlem Hill.  Holy cow!  What a hill! I walk/ran this one too. Then we continued past Lasker Rink.  This mile was similar to the first mile – walk/running the hill, walking at the water stop and running and passing runners when able.

Mile 4: More rolling hills as we headed south on West Drive. My legs were ready to be done!  But there was a lot of crowd support throughout the course. And because the trails in the park are open for runners that aren’t part of the race, they were running on our right (there were cones separating us) and often yelled support. I was hungry at this point so ate the Gu that I had in my pocket.

Mile 4.97 (8K): We enjoyed too short a downhill, then a flat section. Finally we turned left onto the 72nd Street Transverse and finished just west of Bethesda Terrace. I gave it all I had (which wasn’t much at this point) as I crossed the finish line.I know they said it was only a 8k.  But I ran ALL the tangents and my Garmin registered 5.05 miles!!!! 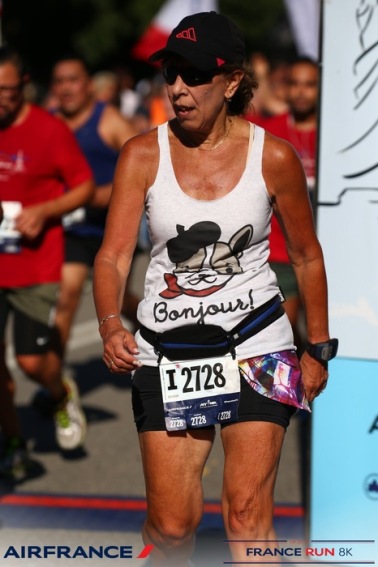 a sweaty mess (and my skirt still tucked into my belt!!)

I really didn’t care about my time.  I knew that it was a lot slower than other 5 mile races that I had done.  And there would be no age group awards anyway.

So I just grabbed water and a bagel and headed toward the Nuremburg Shell (entertainment, booths, etc.)

The lines were long but I did decide to wait on one to get some French cookies before I went off to find Sue.

After Sue and I met up, we were disappointed to find them calling out numbers for the raffle prizes. I mean, it was still early and many many runners were still on the course.  You couldn’t put your ticket in until you finished so I guess if you are slow, you can’t win.  They had also ran out of some of the other food samples.

No other complaints.  It was a fun and well- organized race. Would I recommend this race?  Oui. Oui.

Of course, we couldn’t wait to re-fuel so we left the park and started walking back to the hotel.  We stumbled upon a French restaurant so we stopped.  It was perfect!!!! 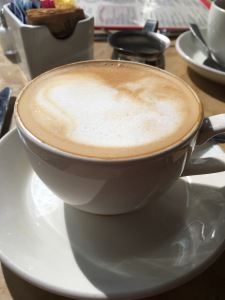 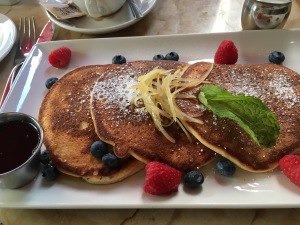 After a shower and change of clothes, we were back on the streets of Manhattan. Sue had never been to the High Line so we decided to go there, walk the whole thing and then go to Chelsea Market.  One of the highlights for me was on our walk back to the hotel (yes we were STILL walking), we found a milk bar (cereal milk is the best tasting soft ice cream ever)

Finally we grabbed our bags but still had time to kill before our bus back home.  So we took the subway to Bryant Park and had a snack for dinner.  Our last excursion for the day was a subway ride to the bus stop (leaving our subway passes off with 2 happy teenagers!)

We spent the bus ride home trying to figure out our next NYC race adventure – NYC Half in March or hopefully the Brooklyn Half in May????

I am also joining up with Running on Happy, Suzlyfe, Crazy Running Girl, and Coach Debbie Runs each week for the Coaches’ Corner linkup.

Happy Running! What is your favorite city to race in?