Since it is Thursday, I’m linking up today with Amanda for Thinking Out Loud Thursday.

Here’s what I’m thinking about today:

Last Thursday, I was complaining about the weather, the flu and having ZERO energy to do anything let alone run. Well, I’m happy to say that I feel much better.

I’m back running.  I didn’t get my scheduled long runs of 11 & 12 in but I got 8.5 miles done last weekend. It’s was after Alyssa had already run 6 miles so she was dragging. But any run with a friend even a slow one is better than a solo run in my book.

I even had enough energy to run 4.5 miles the next day. The weather had changed drastically.  That’s the story of our weather in the NE.

I tried to run for a third day in a row and it sucked.  I should have know better.

So I took Tuesday off and ran again with Alyssa yesterday.  We ran 4 miles and we killed. it.

must be a pink week

So I think I will end my training on a high note – no more runs and THREE rest days until the big day.

Why do I bother?  I am just going to wear a skirt and a tank top.

Today (and it will probably change several times before Sunday):

I can’t show you my outfit because it is packed but I’ll be wearing a black tank, skirt below, cap, matching compression socks and running shoes. (Yes I did some retail therapy while I was sick.)

from Skirt Sports, of course

It’s not even spring but I am planning my fall.  Probably because I already have my spring and summer races picked.

I am registered for one half marathon with a bunch of other runners on October 1.

But I wanted to race at least one more for the year.  I was considering another trip to Florida but then another #holottafun weekend seems to be in the planning stages.

And then I got an email saying that if you running the May Steel Rail Half Marathon (which I am) and you run the October Ramblefest Half Marathon (my PR) also, you get a hoodie….

Alyssa is trying to talk me into it…but it’s ONE WEEK after Wineglass.  I have never run 2 halfs back to back!!!!!!!!!! Tempted…. What should I do?

This is not running-related.  Sorry!! But I wanted to runaway from home because of  it.

I’ll start at the beginning but try to be brief.

I have FOUR CATS (from ages 12-19).  They are adorable.  But several weeks ago, I would wake up to plants knocked on the floor.  My hubby said that the cats were restless. Ok.

Then I noticed chewing on the window sills in the family room.  Hmmm?  My hubby said that Honey (the orange cat) chews on napkins and toilet paper so it was her. Ok.

Next I found holes in the pillows on the couch in the family room and in the computer room upstairs (stuffing missing too).  Again my hubby said it was those darn cats. They were just anxious for spring.

So I replied that I think there’s another animal in our house…like a mouse or a rabbit or maybe a chipmunk.

Tuesday night, after I came home and we were watching TV, I heard a noise in the basement.

ALL FOUR CATS were hanging out in front of us.

After much begging, my hubby went down to the basement to check it out. 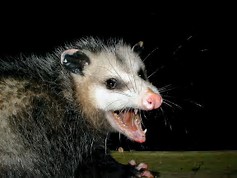 Ok, a possum has been living in our basement, eating our cats’ food and coming upstairs when we are sleep and roaming the house.

So I locked the basement door and threatened to RUN away from home if it wasn’t gone by the time I got home the next day.

The good news is that animal control came, picked the stupid thing up by the tail and carried it out.

My adorable cats are not earning their keep.

Happy Running! What are you thinking about today?  Ever have a wild animal in your house?  Would you run a half marathon two weeks in a row?  Ever run RNR Vegas?