I ran this race in 2014 because 2 ladies whom I met at a previous race raved about it. Now it’s become one of my favorite races. 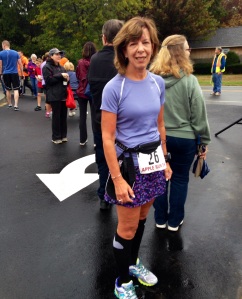 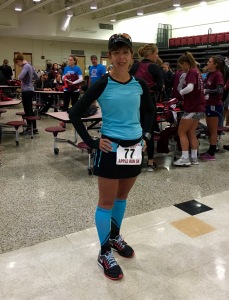 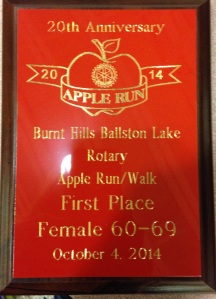 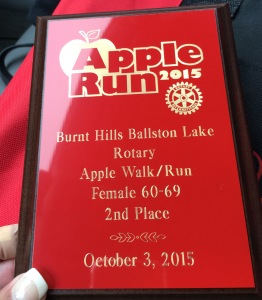 That being said, on a weekend where there was good number of local races (including the Susan Komen Race for the Cure), I chose to drive 45 minutes to run this race.

According to the website, it is a looped, flat course. Even though I ran it twice already, I didn’t remember much about the course. I run so many races, they all blend together sometimes.

Apparently we quickly switched from summer to fall in a few days. But at least the predicted rain did not come. It was when I left the house pretty chilly and damp.

I am the crazy person who refuses to wear capris or tights before Thanksgiving. But I decided for some strange reason to change from my tank to a long sleeved shirt today (Big mistake!!)

I arrived about 30 minutes before the start of the race which starts and ends at the middle school in Burnt Hills. 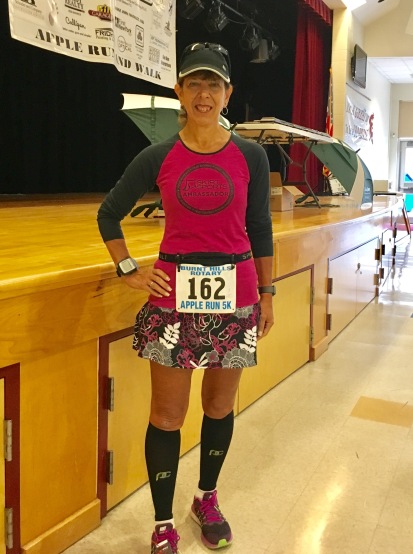 You’ll notice in the above picture that I have my Garmin on my right wrist and that’s my new Apple Watch on the other wrist. I usually have my Garmin on the left wrist but I switched them.  I planned to use the Garmin for the race since I hadn’t tried the GPS functionality of the watch yet and then later try out the Apple watch.

In the gym, I picked up my race packet and was surprised that they had chips for your shoe. I almost forgot to get one.  It’s been awhile since I have had to use one. 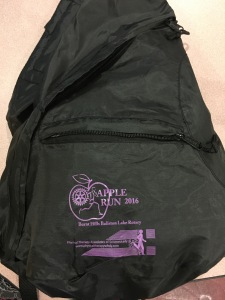 I bumped into the 2 older ladies that I see at most races that I run.  We chatted for awhile before the race.

Then I saw Tom, the crazy guy that I see at most of my races. We posed for pics.

Finally I spotted Sue who had recommended this race. (Her Connecticut friend Ilsa couldn’t come.) We started together and she’s my competition (but she hasn’t been racing much.) 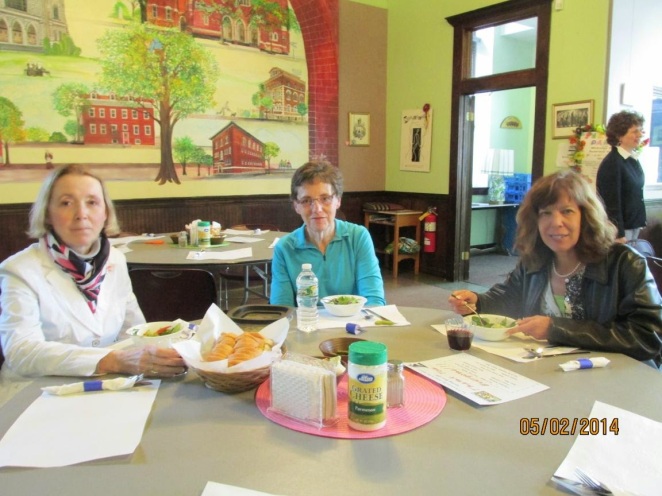 Soon it was time to head outside.  It was then, looking at what other (serious) runners were wearing that I realized that the shirt I had on might have been the wrong choice. 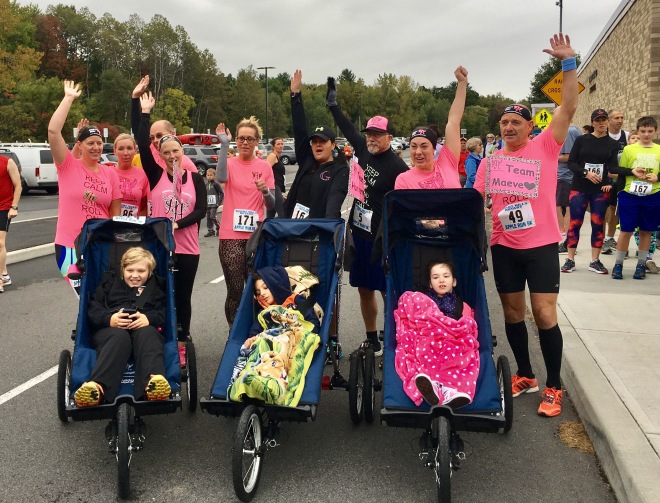 Tom was running with this charity group

I lined up in front because there were so many kids running this race (The whole girls hockey team and cross country team, I think). Then Sue shouted out to me and we started talking.  She was back a ways and then all of a sudden, the race started.  With no chip timing, this was Race Fail #1.

photo from the Gazette

I started to make up for my slow start but with all those kids in the way, it was impossible. I also noticed up ahead was my age group competition.  She beat me last year but she is super fast and was slowly disappearing from my view.

So I just decided to enjoy the race.  Then I noticed that my Garmin was still on 0.  I must have pushed the wrong button.  It was confusing wearing it on the other wrist.  So I started it about 1/2 mile late.  Race Fail #2.

As a result, my Garmin was pretty useless and I didn’t look at it for the whole race.

I love the course although it does feel like you’re running on a slight uphill the whole time. There are only 2 short downhills and they’re during the last mile.

The race course is a loop first through country roads and then around a residential neighborhood and then back along a different country road.

There was someone calling out times at mile 1 which for me was between 8:55 and 9.  At least that was better than last week.  At the halfway point, there was a water stop but I chose not to stop.

That’s when I decided to see what would happen if I ran the whole race without stopping to walk.  I can’t remember the last time I did that…it’s been years.

Though the temp was in the 5o’s, it was humid. It had rained all night  and looked like it may start again.  I was getting increasing warmer and warmer.  I regretted not wearing a tank.  I was sweating and very uncomfortable.  Race Fail #3.

Finally, I came to home stretch. When I saw the clock, I wasn’t surprised that I wasn’t close to a PR but I did want to finish under 28 minutes. I ran as fast as I could and crossed at 27:48.

I was happy.  Not as fast as my first Apple Run but faster than last year.

I waited for Susan to finish. She hadn’t run a race since this race last year so she did great.

Then I had to wait a while for Tom to cross with his group.

Inside there were pizza, bagels, fruit, etc.  I had 2 pieces of pizza and a bagel and waited with my friends for the awards.

The results were the same as last year.  I was 2nd and Sue third.

As always, I enjoyed this race and plan to run this one again next year.

Could that be negative splits?  How did that happen?   Without walking, I really felt that I was running so much slower each mile.  Without a watch, I had no idea of my pace.

My running, however, was not over for the day. 10 miles was on the schedule in preparation for next Sunday’s half marathon.  So I drove to the Zim Smith Bike Path.  It has become one of my favorite running routes.

Unfortunately, I had to run in my sweaty shirt. I was chilled at first but then warmed up.

the leaves are beginning to drop and turn orange. this will be a pretty trail in a few weeks

My legs were definitely tired.  This always happens when I run a race for my first few miles of a long run. But I was excited to try out my new Apple Watch.

I set the Activity App for 7 miles and ran to the end of the trail and then turned around.

I didn’t have the watch do anything fancy.  I’m not sure yet if it can but it shows your heart rate, distance, current pace and average pace which is all I need.  I have never used intervals even on my Garmin. 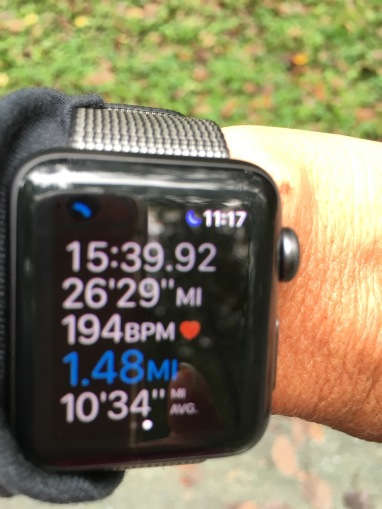 I was walking at this point

It was a nice run.  Lots of of running and walking when I felt like it. Nothing to write home about.  My pace was very slow but I’m fine with it.   All I cared about was that my last long run was DONE!!

The best part was that I parked my car at Leah’s Cakery.  I planned to have lunch there as a reward for having completed 10 miles!

The food there is great and the people who run the restaurant are so nice.

I had a portobello mushroom, tomato, cheese sandwich with the best chocolate milk ever! 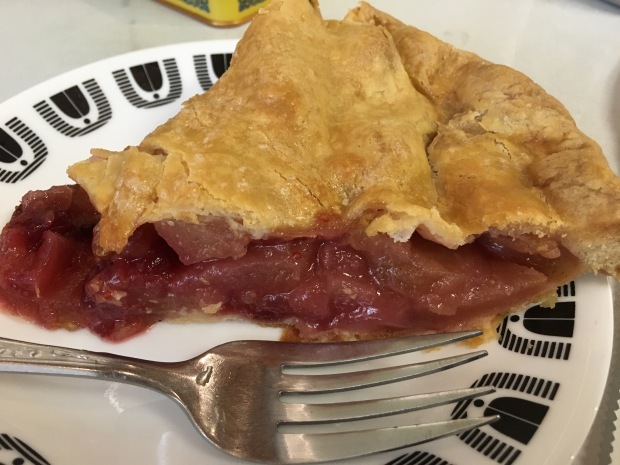 You didn’t think I’d skip dessert, did you? It was a tough decision but I chose the cranberry apple pie.

Back to my Apple Watch, I am pleased so far. It syncs with my iphone and gives you stats on your run. 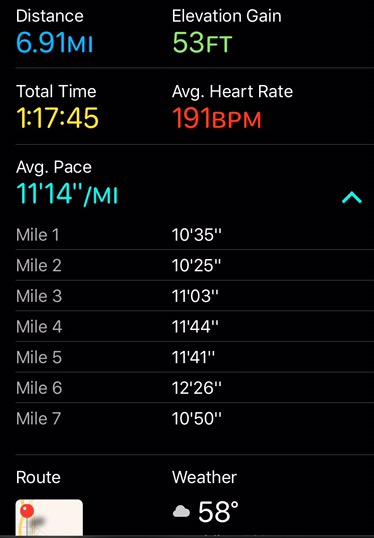 I delete my info right away and I probably wouldn’t even ever look.  I am only interested in my pace when I am running a race.

Since today is Tuesday, I’m also linking up with Erika @ MCM Mama Runs, Marcia @ Marcia’s Healthy Slice and Patty @ My no-guilt life for

This week’s topic is Bucket list race: Where do you dream about running?

Running in France (remember I used to be a French teacher)

or the south of France:

For both I would need more $$$ and more time off.

Running in NYC (my second favorite city after Paris)

either the NYC Half Marathon

or the Brooklyn Half Marathon

Both are lotteries so I can hope… Happy Running! Which race(s) are on your bucket list?