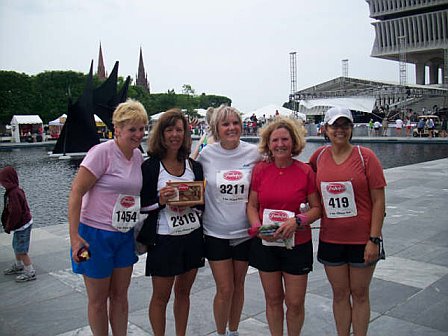 Due to construction, they changed the course last year.

They said that this course would be faster…less congested and have a less steep hill at the start and finish.

I did run the new course last year and I liked it.

As with this race every year, I never know what will happen… I could break my foot again (as I did in 2013) or have a PR.

Anyway, I should be recovering not running a 5K.  I just raced a half marathon last Sunday.  As you know, my feet are not what I would like them to be (but it is what is…)

But how could I miss my 9th Freihofer’s Run for Women?

And my second Freihofer Training Challenge… 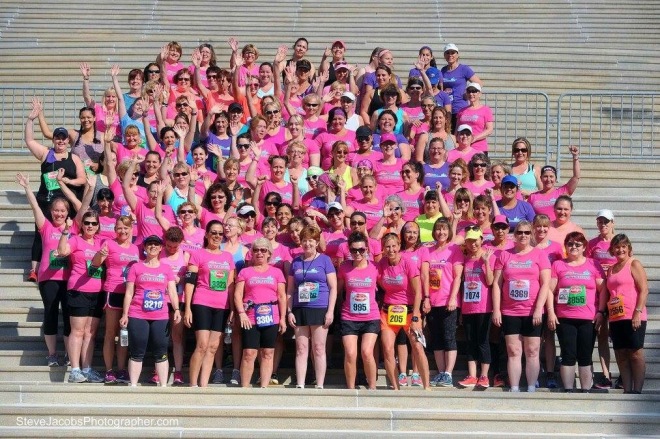 Training is a loose term. I kinda just showed up.  Monday runs were always after a Sunday long run or race and I never attended the Saturday runs.

But I was excited to be part of it and support all the runners who would be finishing their FIRST 5k.  And see my “advanced” buddies who would hopefully PR.

As I have done every year, the day before I walked to Empire State Plaza concourse at lunch to go to the expo and pick up my race packet. They used to have a really nice expo with vendors and health-related booths but no more.  You didn’t even get your cookies and bread at packet pickup as in previous years. 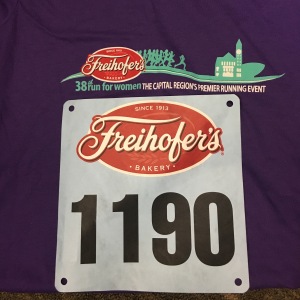 the race shirt was not tech 😦

For convenience, I parked at work on race morning and walked to the start.  I do this every year.  However, with the new course, it was an even longer hike. Like 2 miles! 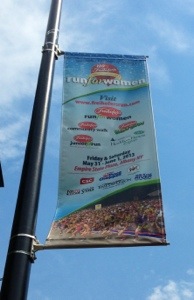 pics from 2 years ago… 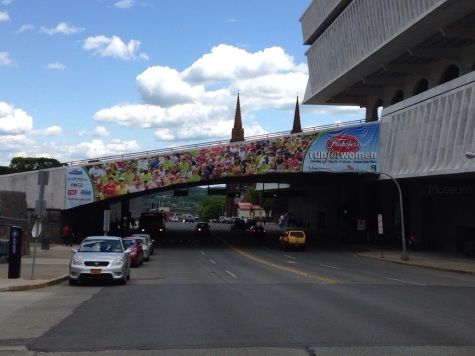 And the weather…it was not forecasted to be as warm as previous years but I was starting to feel the uncomfortable humidty already.

I cut through the Empire State Plaza to use real restrooms. 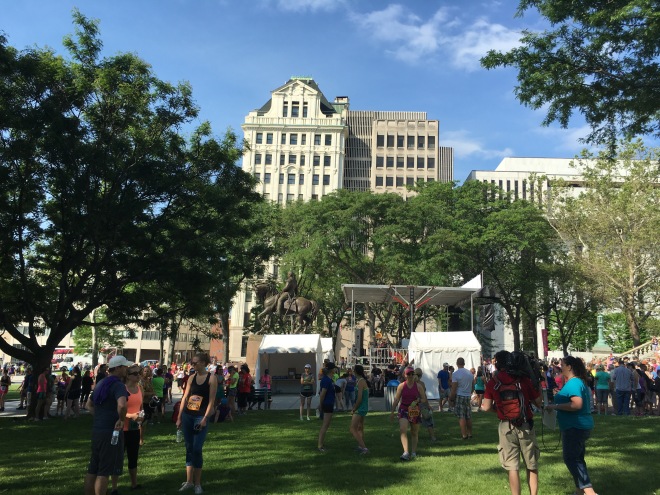 I got to the race location and immediately located the Challenge Group Tent and a lot of first time 5k runners. It was pretty early but I bumped into so many runners that I knew.  Several runners from work and from the Turkey Trot Training group.

I also ran into a few local runners and bloggers – Judith and Judy.

Catching up with everyone made the time go by quicker.  Soon it was time to line up and squeeze in my blue corral. 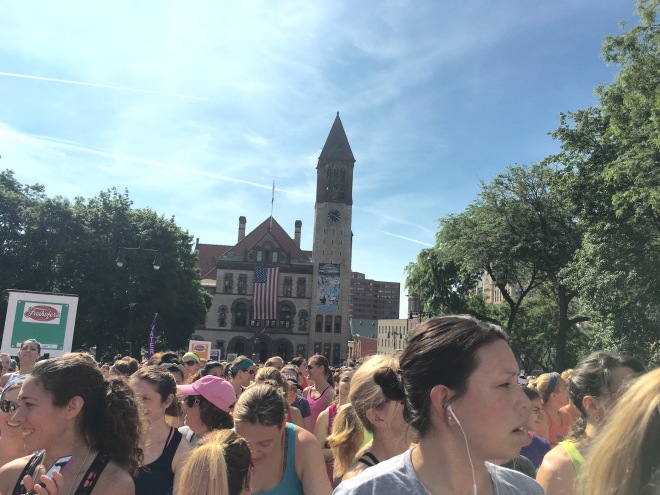 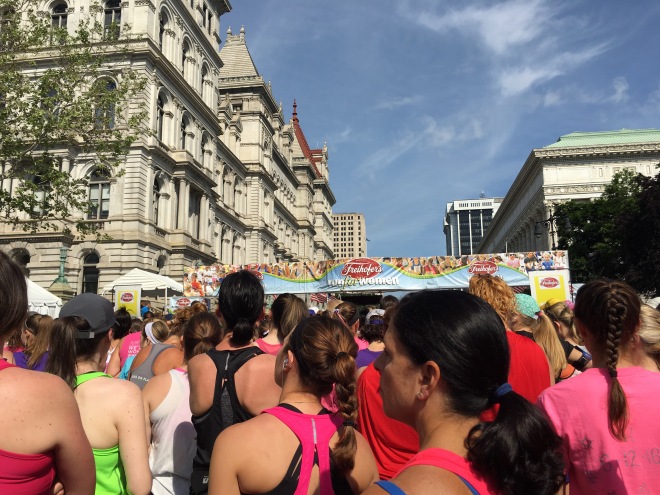 Although it was very crowded, there were fewer runners than when it was Madison Avenue. I’m not sure why. (new route, weather??) 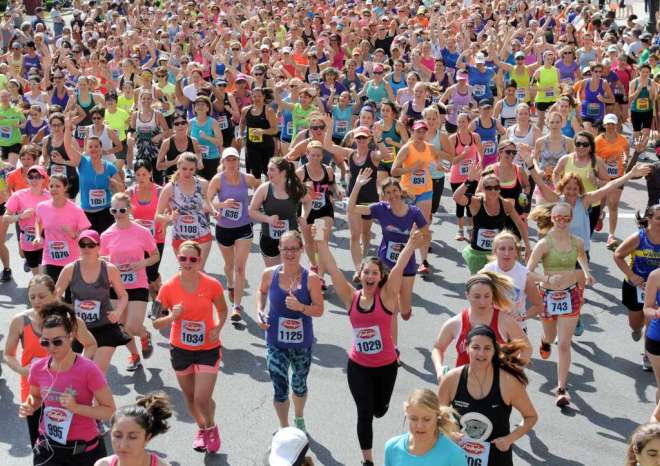 Times Union photo – can you spot me?

Anyway, with the new start, it didn’t take as long to get moving and the first hill was longer but not as steep.

As soon as I started, I got the feeling that my legs were not as recovered as I had hoped.  They were moving but so slowly.

When I got into the park and looked at my time, I was shocked at how slow it was.  Usually mile 1 is my fastest.

I continued to trudge along and couldn’t wait to walk at the first water stop around mile 1.25.

And boy was it hot!!! And humid!! I know after Florida and last weekend, I should be used to this weather.  But I always find it hard to breathe and run fast in the warm weather.  And my legs were steamy!! (Damn, compression socks!)

This course had you run around more of the park and it also seemed to avoid the bigger hills of the park. I tried to run in the shade of the trees whenever I could.

You would think that I would have a faster time for the 2nd mile.

Nope.  I was dying.  I told myself that I would not walk until the next water stop.  That was around mile 2.5. At this point, I was starting to get some energy and I picked up the pace.

Finally we left the park and headed downhill to the finish.  Not the steep downhill that we used to have but at least it was downhill.

I ran as fast as I could.  I knew that I would not have a great finish time but I was determined not to finish over 30 minutes.

And I did not. 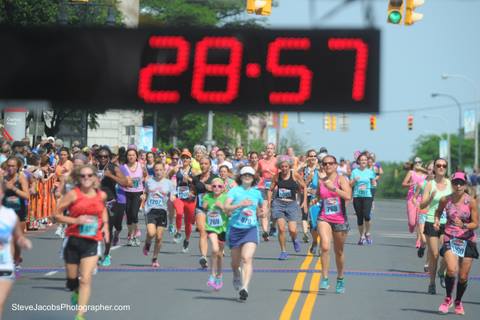 I grabbed a bagel and some chocolate milk.  It was definitely less congested than when it was by the fountains on the Plaza.  No long lines for food.

I ran into lots of runners again that I knew.

The first time runners were so excited.  That put a smile on my face. I quickly put my disappointment in the back of mind and congratulated them on their achievement.

I walked back to the Training Challenge Tent to get some more food and chatted with Judy and her friend for awhile. 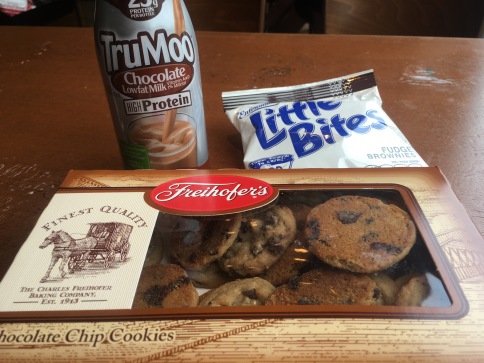 I may not have run the race that I wanted but I still enjoyed myself.

You get what you put in.  I did not do all the speed workouts so I can’t be disappointed.  I also just ran a half marathon and I am no spring chicken. Plus my time was faster than last year. So I was happy with that.

Afterwards, I walked back to my car (uphill for 2 miles).

I had planned to run 4 more miles. I really didn’t feel like it.

But I drove to the rail trail and slowly shuffled my way to 4 more miles. 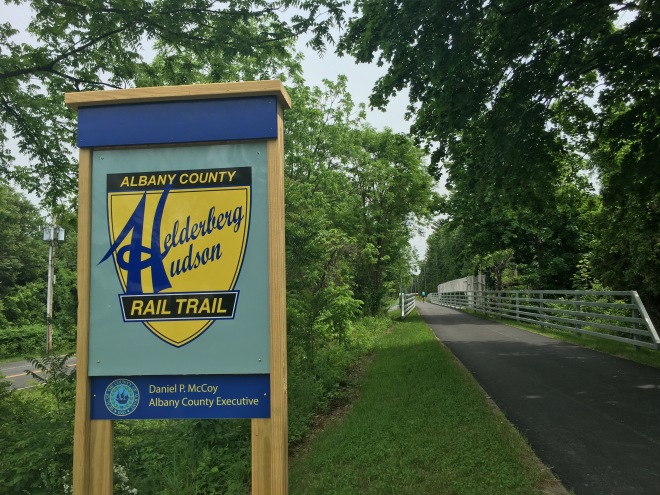 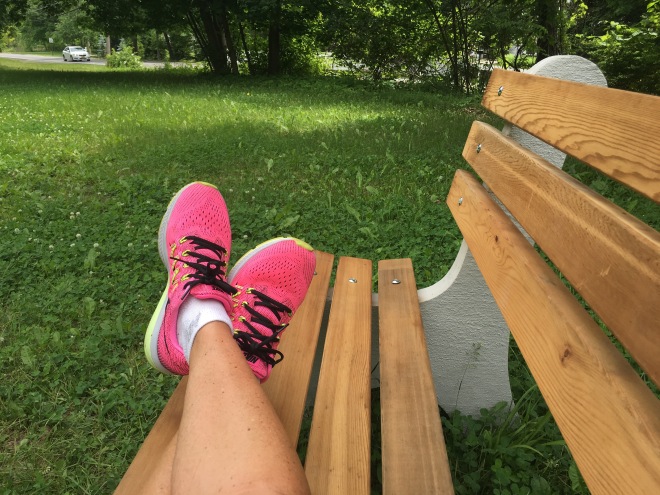 resting halfway on a new bench (without my compression socks!!)

So FRW #9 is in the books!  The tradition is still alive!  It was again a great local race with over 3,000 women running it. 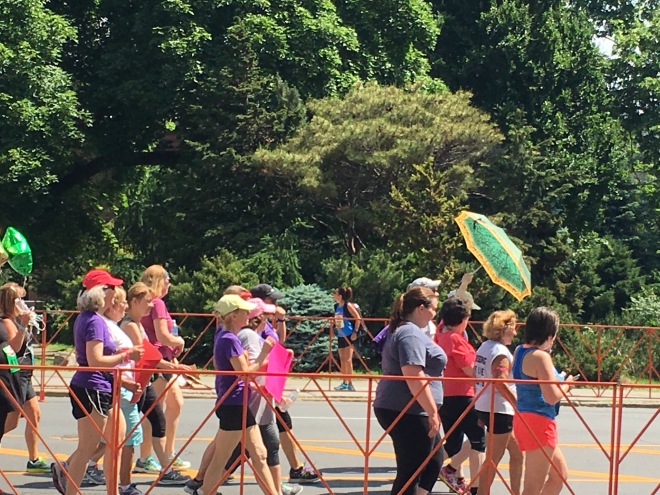 There is a bunch of women who have run ALL 38 FRW races.

Even Joan Benoit Samuelson was there. She did great. Sara Hall came in 2nd. (Times Union photo)

Happy Running!  How was your weekend? Did you race? If so, how did it go?