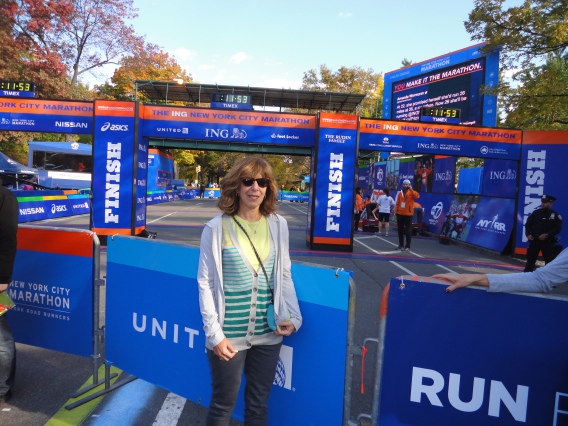 That day, I knew that I wanted to run this race.  It didn’t work out last year but this year, I signed up.

I reserved a room for the night before the race in an AirBnB apartment – not as nice as the one in Brooklyn but since it worked out well then, I wasn’t nervous about it this time.

I again took the $5 megabus to NYC on Friday.  Unfortunately my host wasn’t as flexible as the last and I couldn’t check into my room until 6 pm.

So I checked my bag at Macys (it’a free) and then took the subway to Little Italy.

It was so enjoyable. I got to see and visit some of the colorful and historical sites of this old Italian neighborhood (My hubby is Italian and he would have loved it.) such as, Parisi Bakery, Alleva Dairy, Lombardi’s Pizza, Ferrara Bakery, famous movie locations, the Curb Exchange, Petrosino Square, Old St. Patrick’s Cathedral. I also got to sample some great Italian food – fresh mozzarella, prosciutto, bread, pizza, cannoli (Carb loading, right?) There were only 5 people on the tour (a group of 6 cancelled at the last moment) so we had double the food (and had to eat it 🙂 ).  The other 4 women & I bonded immediately and had a great time.  They even convinced me to stay in Ferrara’s to have coffee with them after the tour. 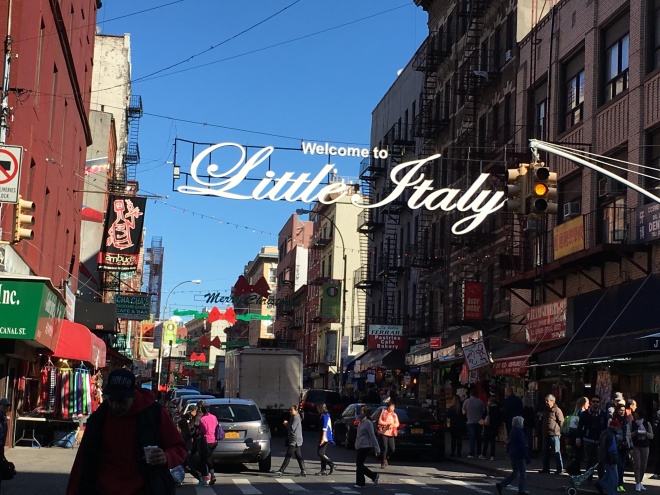 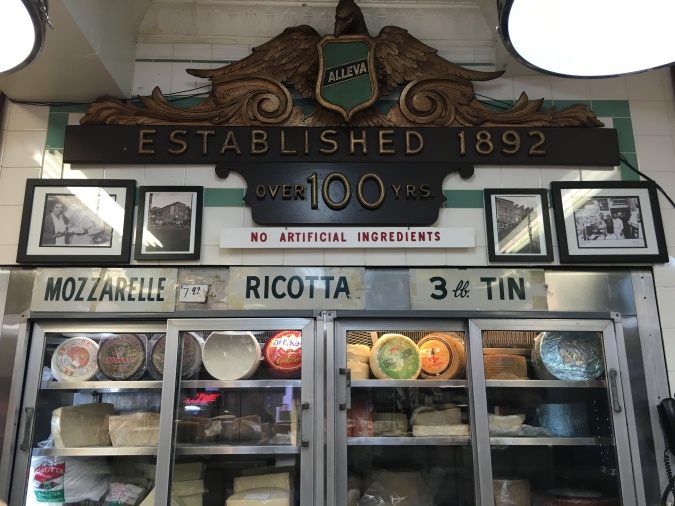 Allevas – old cheese store in the US 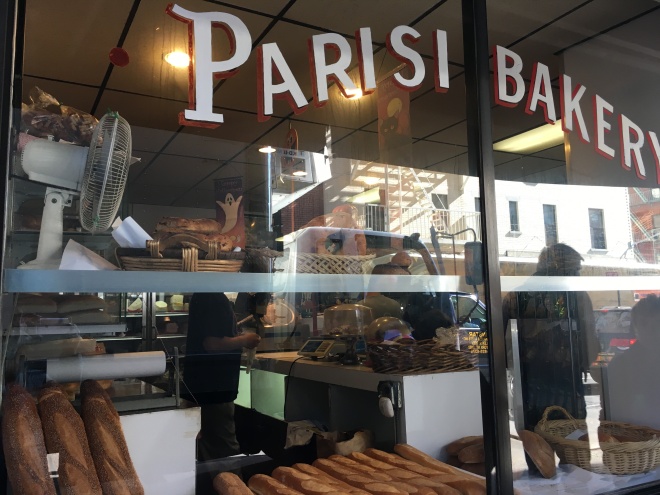 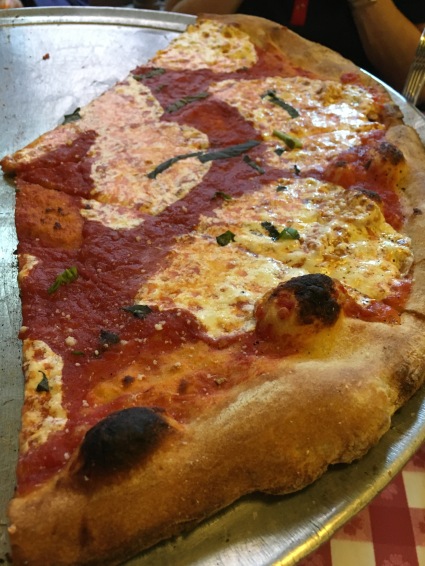 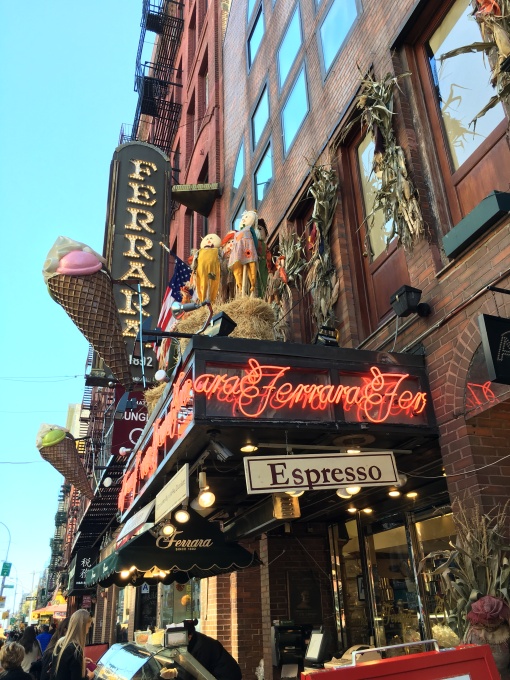 I ate the cannoli too fast to take a pic

Next, I had buy some homemade gelato (you have to when in Little Italy) and took the subway back into the city to the Javitz Center where the NYC Marathon expo was being held.

Of course, it was huge and crowded. Most people who were there were running the Marathon.  I picked up my race packet for the 5k and walked around checking out the booths. I was supposed to meet Pam from We Run Disney but I spent time fixing the age on my bib and we just missed each other. Well, though tempted, the only thing I bought was some Gu (cuz it was only $1) 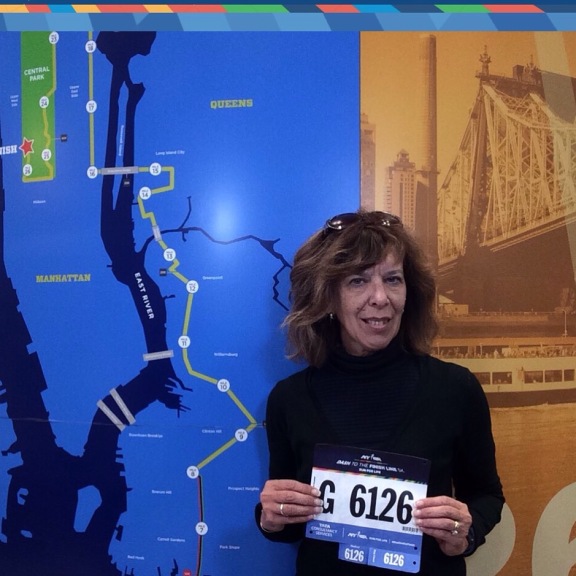 After the expo, I walked back to Macy’s to pick up my bag. I had been walking straight since 10 am and now it was 5 pm so I stopped to have a light dinner and put my feet up.  Then finally I left to check into my room.

Marilyn & Michelle, my hosts, didn’t live in the apartment (which was different than the situation for the one in Brooklyn).  She rented all 4 bedrooms – 2 being real rooms & the other 2 (like below) being makeshift. It was fine but I would have preferred the real bedroom (…next time).

practical but not ideal

After settling in, I had planned to check out TKTS and get a cheap ticket to a Broadway show but I was too pooped.  So I stayed in and finished a book.

The next morning, I got up early and had my usual breakfast (oatmeal & tea) and took a cab to the race start. I didn’t want to mess with subways and crowds at this hour.  The cab driver was nice and asked me what I wanted to pay rather using the meter.  I didn’t know what to say (according to Uber it would cost $22.50) so I said $10 and he said ok.  Then I realized I only had a $20 bill with me.  He actually let me stop and get change.  He took me to the UN (42nd & 1st) and when it wasn’t the start, he took me to 49th (The start was on 47th but close enough).

the start line in front of the UN 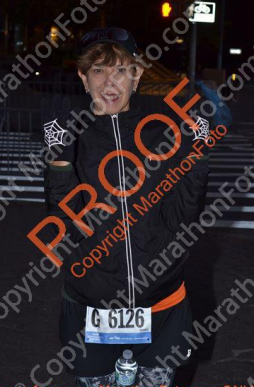 I was really lucky.  I spotted 3 ladies (from Toronto) in a doorway.  It turned out be UN ambassador headquarters and there was doorman and a overhead heater.  (The UN ambassador from the US was actually running the race). The 4 of us hung out there until it was time to line up in our corrals. The ladies were running the 5k and their husbands the marathon the next day.

The corrals were lettered A-Z depending your pace.  I was in G (10 minute pace.) One of the Canadian ladies was in corral A because she put her time in kilometres not miles LOL.

So I took of my throw away shirt and tied my jacket around my waist (for later) and wandered about 7 blocks to my spot.

There were over 10,000 runners from 130 countries. The energy was so contagious. Some runners were there to have fun and dressed up in costume.  Others were warming up for the marathon the next day and there were also runners like me who couldn’t run 26.2 miles so ran 3.1  instead.

Finally it was time to start but of course, it took a while for me to cross the start line.  It was slow going at first but I just tried to enjoy the experience and pick up some speed at the same time. I knew I would slow down when I met the hills of Central Park.

This was the course: 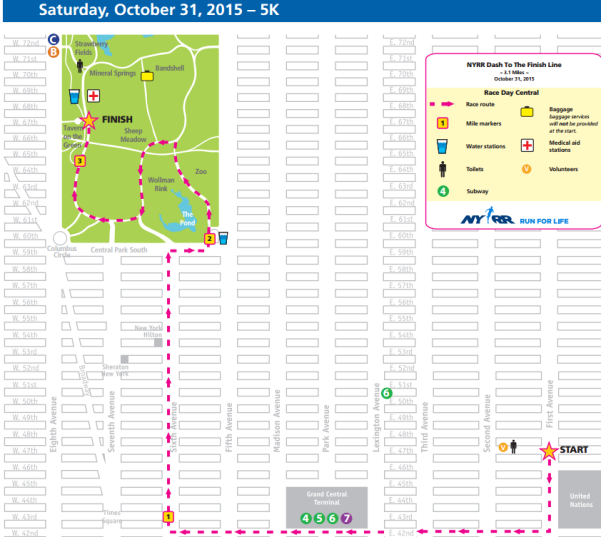 Mile 1: We started at Dag Hammarskjold Plaza on 47th Street between First and Second avenues and headed south. Then we turned right on 42nd Street and headed west.  We passed Grand Central Station, the Chrysler Building, Bryant Park. Next we turned right onto  Sixth Avenue.

can you spot me? (On the left – orange shirt)

Mile 2: We proceeded up Sixth Avenue toward Central Park. We passed Radio City, the Plaza hotel and lots of screaming spectators and then turned right on Central Park South/59th Street. Finally we turned left into Central Park at Grand Army Plaza.

Mile 3: We entered the park, then turned left onto West Drive. We ran those rolling hills and curved around the bottom of the park eventually finishing at the NYC Marathon finish line, on West Drive at 67th Street.

This was probably the most fun, I’ve ever had at a race.  I never looked at my Garmin. I knew that my first mile was slow because you just couldn’t start running for a while.  Even then, I had to weave through the crowds at many points.  (The serious runners were obviously faster than me).  Plus, my legs just felt like lead after standing in the cold for over an hour. I felt perfectly dressed, even a little warm at times.  At the water stop (which I didn’t stop at), there was a wall of people just stopped but I just smiled and weaved around them.  The hills in Central Park slowed me down but I didn’t walk and they weren’t as bad as I had feared.  I was thrilled to see the finish line but I just couldn’t muster up a sprint (??).

was I walking across the finish line??

I couldn’t tell by the clock at the finish line but I checked my watch and I did finish in less than 29 minutes!! So I was happy! 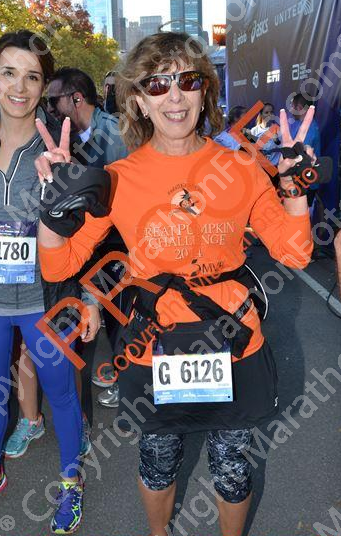 Once you crossed the finish line, they handed you a bag of food and ushered you along.

I’ve never been at a race this big that was so organized.  There were volunteers everywhere.

I texted Pam again hoping to meet up but she had already finished her shakedown run in the park so we planned to keep in touch for the rest of the day.

Spike Lee’s car for the next day 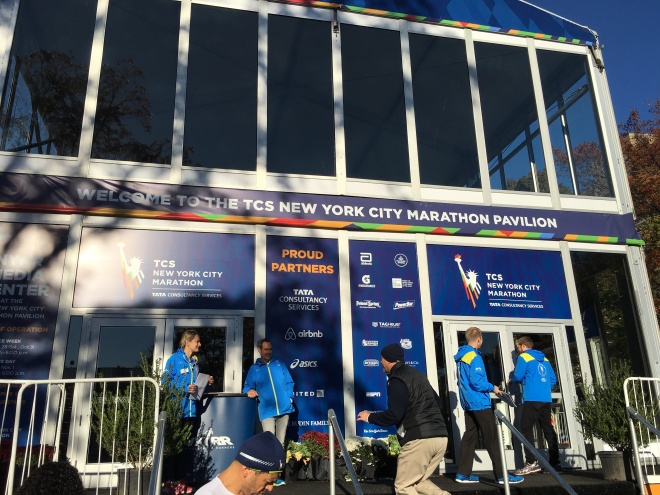 brand new pavilion – I didn’t make it on Friday and they were closed today.

After following the path out of the park, I had to wind my way back because I had brunch reservations at Tavern on the Green.

I was too early but they were nice enough to give me a table anyway. 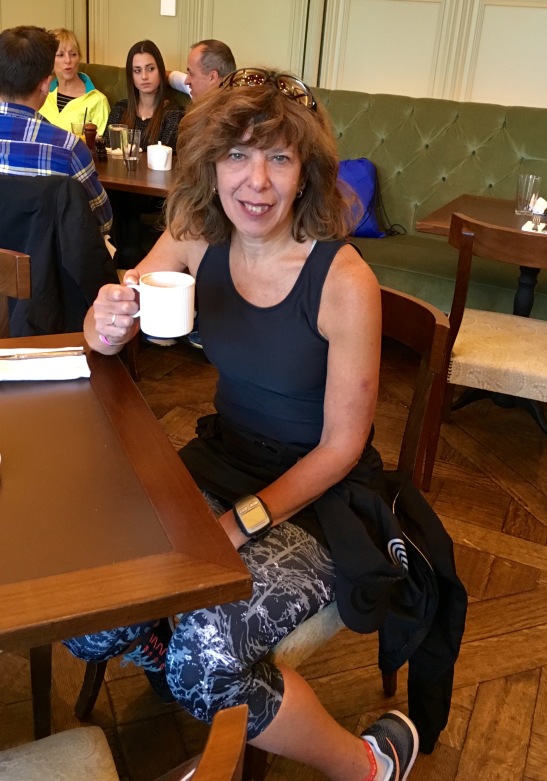 they didn’t even mind that I was sweaty

The food was expensive and but tasty (and something you only do once.)

Next on the schedule was sightseeing, leaf peeping and running 5 miles in Central Park. 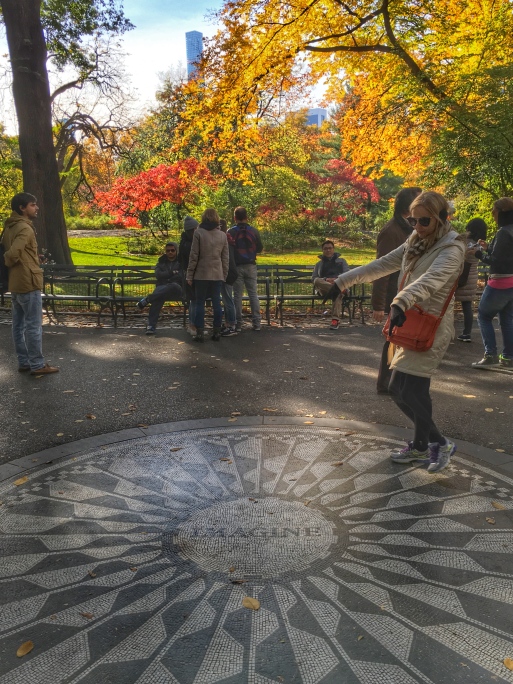 I planned to head North on the west side, run around Jackie O’s reservoir and then run back on the east side.

It amazed me how many people were running in Central Park.  At times, it felt like a race. 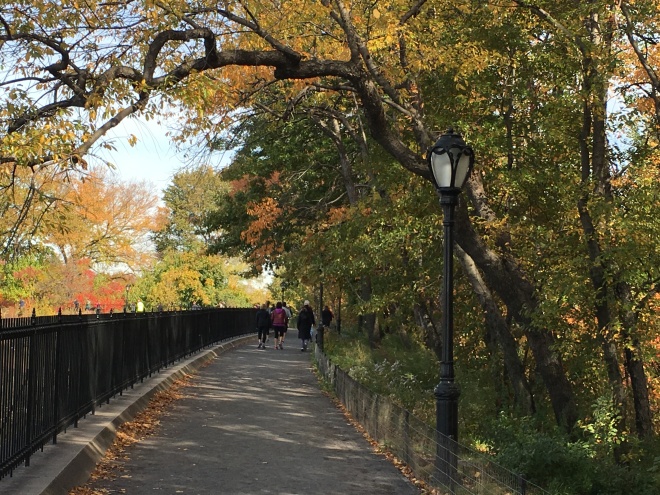 And that’s what I did (I didn’t connect with Pam – she was on the east side when I was on the West side & vice versa). I ran and took photos (lots) and although I may have walked more than ran, I covered my planned distance.

still a lot leaves on the trees down here 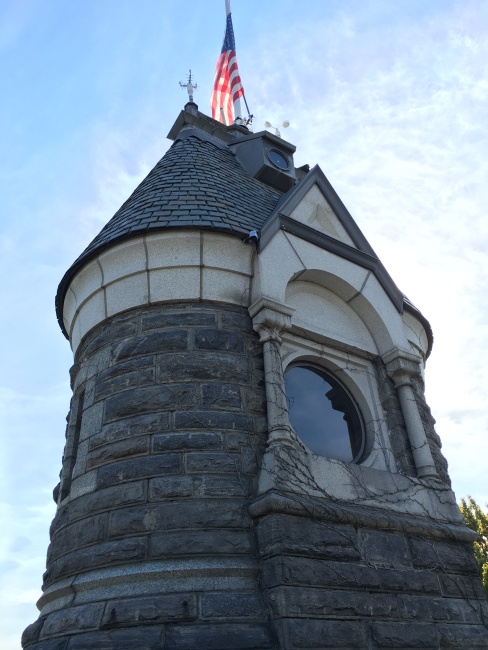 took a break and climbed to the top of Belvedere Castle 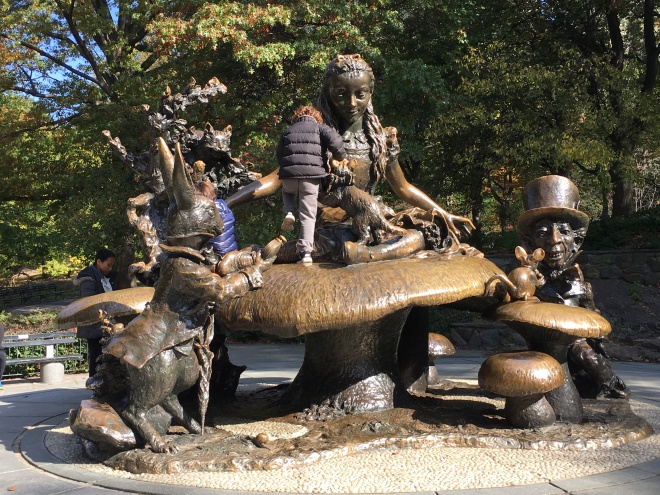 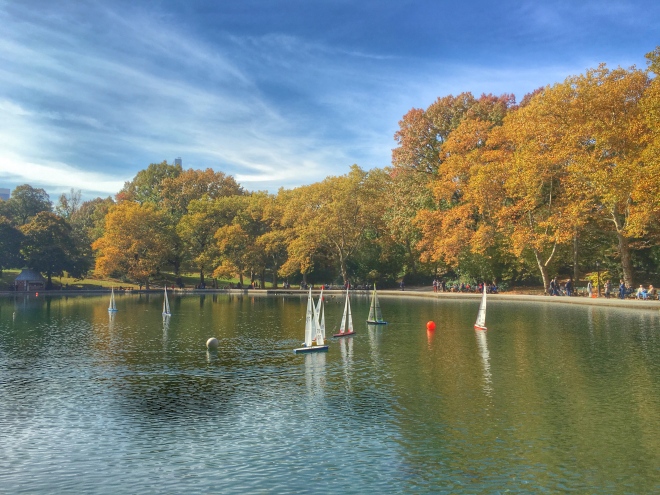 I stopped at the Plaza on my way back to my room (checkout was 3 pm) and found a food court on the lower level (tempted to have a treat but abstained. 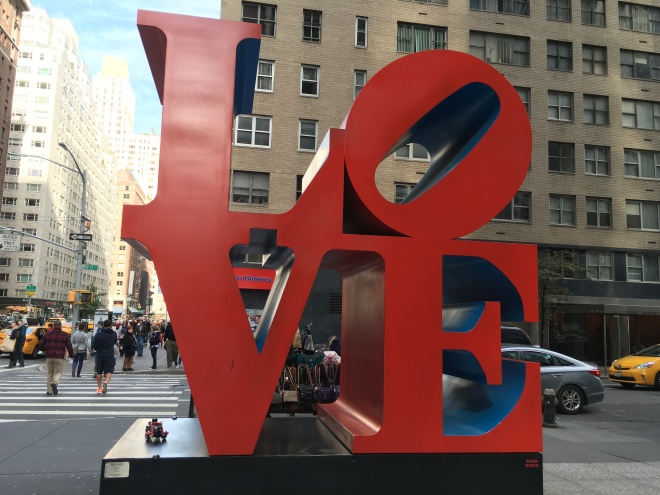 this reminded me of my racecation in Philly

I also stopped at Bryant Park. 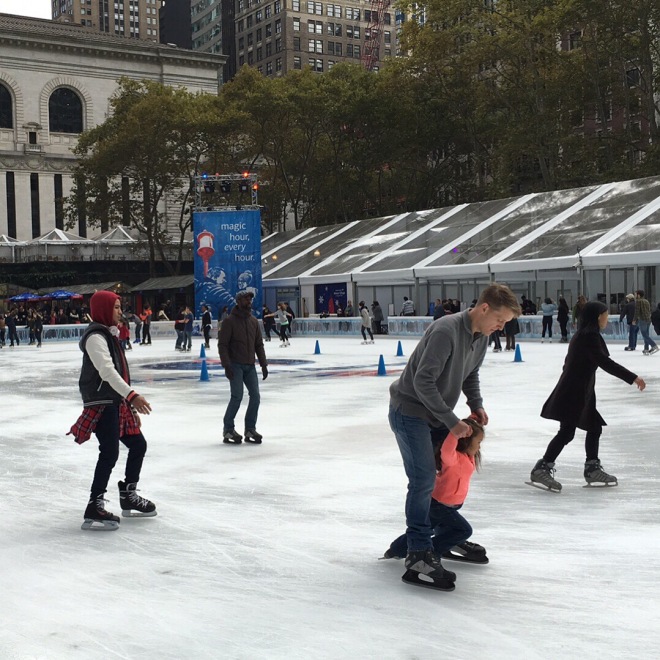 I walked through Times Square before arriving at my room – pooped again.

I still had time to kill before my bus.  I stopped for dinner

NYC – matzoh ball soup – what else?

and made a 2nd trip to expo. 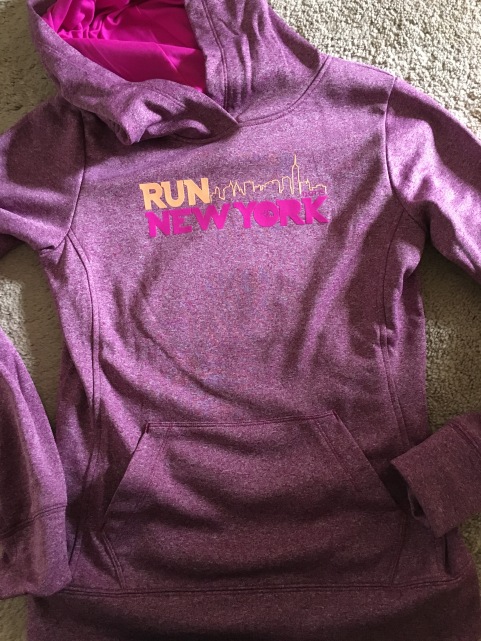 I had great weather and everything went perfectly!

The highlight, of course, was the race even though it only took a half hour.

I finished 17th in my Age Group out of 110 runners – Not too bad considering the crowded conditions. 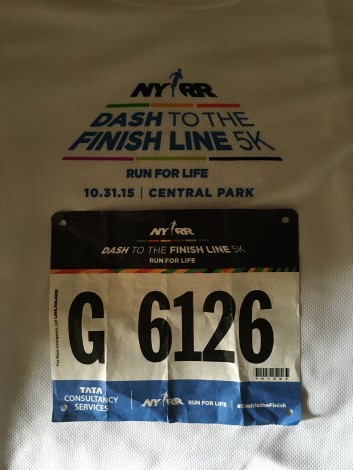 I may have to do this one again!! Who wants to do it with me?

Happy Running! Did you run or race this past weekend?

13 thoughts on “NYRR Dash to the Finish Line Race – Before, During & After”