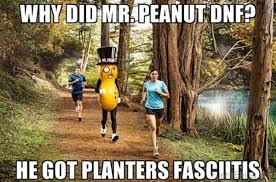 Ok, this is not a funny topic.

But let’s face it. Things happen. The more races that you run, the more likely that you will either DNS or DNF or even both.

I have been lucky (or maybe just stubborn) but I have never had a DNF.

That doesn’t I mean that I haven’t come close or should probably have.

There was the time when I ignored a metatarsal stress fracture… and ran TWO races.

Then there was the time that I broke my foot at mile 1 and finished the 5K,

Of course, there was the time that the race was cancelled due to extreme heat, but I stubbornly continued running and crossed that finish line.

Now DNSes…I’ve had plenty. I register for a lot of races and I register early so there are several reasons for a DNS:

Yes, I’ve skipped a 5k or two because of rain. (But I have run half marathons in the rain.)

I wanted to DNS but I flew to CA for this race.

I have missed races because of cancelled flights. Twice that I can remember.

I was supposed to run a race with a friend in Palm Springs but instead did some trail running.

The most common reason has been all my injuries – strained Achilles in 2010, broken ankle and stress fracture in 2013 and broken foot in 2013.

However, probably only two or three total DNSes from injuries. Not too bad.

Unfortunately, I just had one.  And it sucked.

I have also had races re-scheduled due to weather.

re-scheduled from Jan 1 – still too cold!

Nope, none here.  If I sign up for a race, I run it.  For me, running a race is the best cure for a mojo slump.

Same here.  I may not race the race.  But I will run it and even if I have to walk a lot of it.

post achilles injury so I walked half of this Half Marathon

Here are some interesting posts/articles on this topic:

In other words, sh##t happens and we deal.  Sometimes we make the right decisions and other times, not.  Either way, we move on and sign up for another race.

Happy Running! Have you ever DNFed or DNSed a race?  Please share.