That was before I knew I would be training Buffalo and have driven 5 hours home the night before.

And who knew that summer would arrive and it would be 98 degrees and HUMID.

Anyway as I remember it from 6 years ago, the course starts with a steep uphill and then flattens out.  You run through the park which has rolling hills ands then it ends with a steep downhill.

It is actually more of a run than a race.  With 10,000 participants and many walkers, I felt no pressure to do anything but finish.

When my co-worker went to get my shirt and bib, it wasn’t with the others. Eventually they tracked it down and I made plans to pick it up before the race.

So when I finished work at 4pm, I stopped at Starbucks for a chocolate banana smoothie. I hoped that would be enough.

I was already sweating by the time I arrived at our designated photo meet-up.

We teamed up with the UAlbany team for a total of 60 runners. My workplace only had 13.

2 of my co-workers (in purple)

I wore my purple team shirt for a pre-race photo…

then gave it to another co-worker who was not running.  I raced in a purple tank instead.

With 10,000 runners and no corral system, the runners seemed to line up for miles.  I just pushed my way into the middle and then gradually moved up.

And waited in the crowd (and sweated).

Sawyer Fredericks (winner of The Voice and a local) sang the National Anthem.

photo from the Gazette

This guy juggles during all his races

The biggest problem with this race was that unless you were in the front and very fast, it was impossible to gain any speed.  There were walkers in the front who didn’t realize they shouldn’t be.  Then there were those who ran and then just stopped to walk.  The middle of the packers, like me, just weaved in and out, bumped into people saying “excuse me” though the entire race.

I think it’s a great thing. So I tried not to get annoyed or take it seriously. It helped that my Garmin refused to turn on.  And I was dying and nauseous from the heat.

The course continued through the park with rolling hills – one or two being rather steep (I don’t remember much since I was delirious from the heat.)

There was a water stop that you passed twice.  I ran up until the first stop and then I walked.  I walked again at the 2nd water stop but by mile 3, I was fading fast.  I walked several more times.

Eventually, you headed toward that downhill finish.  I got some energy back when I saw my co-worker cheering everyone on. She videoed me as I ran by. 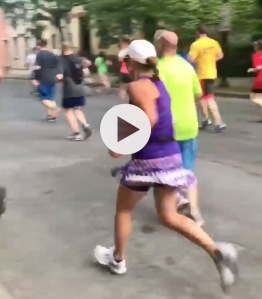 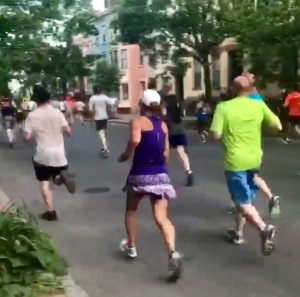 When I saw the clock in the distance, I ran as fast as I could so that I could at least finish under 34 minutes.

geez. do I hold my breath run I run?

I was very impressed by the race organization.  After you picked up water, you proceeded to a tent to get your time.

not an impressive time (way slower than my last race) but considering the heat and all the walking, I was content.

Then you continued on to get your race shirt, followed by another stop to a get bag with food. 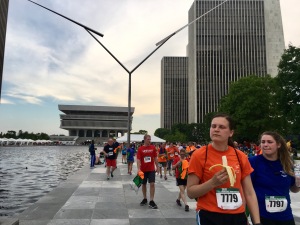 I, however, had to make the long walk back to my car…and the sky was darkening. You could see lightning and hear thunder in the distance.

It made me smile but I quickened my step to get to my car before the storm arrived.

The highlight of the evening was meeting new co-workers and chatting about running over beer and wings.  We even discussed meeting weekly for a fun run.

So no race splits to report. No PR.  But I am glad to have participated in this race and I plan to run it again next year.

Ilka from Ilka’s Blog and Angela from Marathons & Motivation

Happy Running! Ever participate in a team race? Does the heat and humidity bother you?