I was running this race for many reasons:

1. GOTR is a great organization. I was a GOTR running buddy the last two springs and I was happy to support them again.

2. The STEM runners were running their first 5k. I volunteered on Wednesday evenings to help several train for this race. 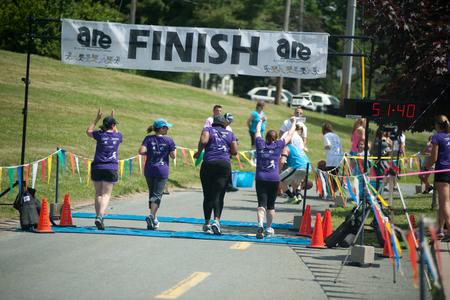 STEM participants in a previous 5k

3. Several of my running friends are also running this race. It’s nice to know people to hang out with before & after a race.

Nov – Dash to the Finish 5k

4. I love to race. This is a flat course and one where someone could PR. I have also gotten a AG award every time I’ve run on this course. But I know that it would be selfish of me to try for this one..

5. I had to run 12 miles today in preparation for my Dec 3 Half Marathon. The Corning Bike Path is a perfect place to extend my miles from 3 to 12.

So I arrived early to a crowd of excited runners – young and old.

I parked in the parking lot that was farther away and walked to the start.

It was cold. I had better get used to this weather because it’s only going to get worse.

I wore layers which I shed before the race. I knew that I would be cold waiting to begin but fine once I started running.

I immediately bumped into the STEM volunteers.  There were lots of them.  We anxiously waited to the STEM runners to arrive.

Every time, I turned around, I saw someone that I knew. I saw Judy, Tom, Melissa and her daughter, etc.

Judy and I planned to meet up aftre the race to run some more miles.

Eventually some the STEM runners did arrive. There were a few ladies from the first STEM program. They were still running and I was so happy to see them again. One runner, Kim, just ran her first half marathon and is thinking of a full marathon.

After we took some photos, it was time to line up. I was paired with a runner who really needed encouragement (her best friend relapsed last night and she was very upset about it.)

The serious runners lined up first followed by the GOTR runners, their coaches and running buddies.  Then came us. Needless to say, it was very slow going for the first 1/2 mile.

But we had perfect weather. What seemed to cold at the beginning, warmed up. I was glad that I shed my jacket and wore capris instead of tights.

I chatted with my running buddy the whole time giving her encouragement and trying to boost her spirits. We ran at around an 12 1/2 min pace which was slower than she usually runs.But today was about getting her to the finish line and doing something positive for herself.

So we plodded along. As soon as I saw the finish line, I told  her to take off. I wanted her to finish on her own.

And she did with tears in her eyes.

on the front & back of our Mizuno jackets and these runner really ARE!

After she got her medal, he hugged me and thanked me.  She said she never could have done it without me.

This was one of the most rewarding experiences I’ve ever had running.  Much better than any PR!!!

After I was done, I hung out and watched the others finish.

2 of my tennis friends also ran their first 5k

Afterwards, Judy was nice enough to keep me company as I needed to get some more miles done. We ran in the opposite direction from the race course and then turned around and followed the course again.

It was a picture perfect running day.  I was very happy about this since the weather for the next few days does not look good (even snow is predicted!!).

But after 7 miles, she left me to my own devices.

So I ran in the direction we first headed and then I was curious to see how far the bike path continued, so I ran into the city. I didn’t want to run too far so I turned right (instead of left to continue to the rail trail) and made a pit stop at Starbucks (of course). After a coffee and a cookie (needed fuel). I headed back on the bike path to my car.

Happy Running! Did you race or run this past weekend? Ever run a race just to help someone else?

9 thoughts on “Girls on the Run 5k/ STEM Race Recap”