Last Sunday, I was recovering from a cold and had 11 miles on my schedule.

I went into town and ran 4 quick miles then met Judy to run on the nearby rail trail.

It wasn’t cold but it was very cloudy and overcast. Judy had planned to run 8 miles and I decided that I would see how I felt.

So we ran 4 miles downhill and I felt fine.

I love this trail because of all the interesting views.

However, this paved path is uphill on the way back and that always makes it difficult because you are more tired.

But for some reason, I felt great. I ran 12 miles instead of the planned 11 and I could have run even more.

So this past Saturday, I planned run 12 again. It would be my last long run because my half marathon in 2 weeks.

This time, the sun was shining.  I chose to run on the Corning Bike Path which is flat. My cold was gone.  I had high hopes for this run. 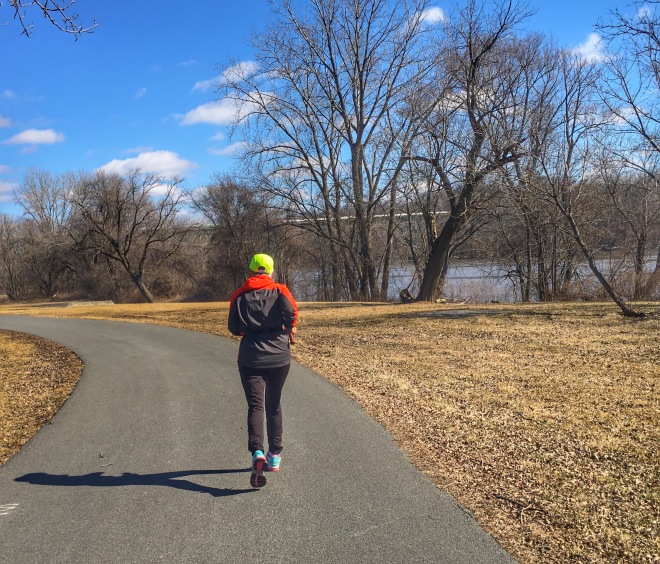 I invited Barbara to run the first 4 miles with me.  And she slowed down on my behalf. I enjoyed running with her since we haven’t run together in a while.  It was nice to catch up.

However, I felt sluggish from the first step. Did we run at a faster pace than I am used to?? Maybe but it was much slower than my race pace. So it should have been fine.

Judy arrived to run the last 8 miles with me but I continued to run with Barbara for 2 more miles.

Then I dragged myself through the next 6 miles with Judy.  I usually run at a faster pace than Judy but not today.  If it weren’t for her, I may have quit.  My legs felt like cement.

A week ago, I felt like I could run forever.  Today, I couldn’t wait to be done.

Sometimes, running is so fickle.

Did I eat too little the day before? Maybe.
Did I eat too many hours before my run?  Yes. I was hungry when I started.
Did I run the first 6 miles too fast?  Faster, maybe. But I don’t think it was too fast.

Most likely, it just wasn’t my day.  It happens with races. Why wouldn’t it happen with runs?

Even with a bad run, I enjoyed having the company.  I hope to run with them both next weekend.

Happy Running! Ever have a bad run when it should be a good one?

Druthers Helderberg to Hudson Half MarathonApril 17, 2021
50 days to go.