As I mentioned in a previous post, I only signed up for this race to boast my morale hoping that some of the speed that had been lacking in my runs would come back in a race.

I was very tempted to run the 5K but since I am training for a October Half, the 10K would bring me closer to my 10 planned miles.

The weather wasn’t too bad considering the high temps we have had.  It was in the low 70’s but with the humidity, it felt warmer.

the course was along the Hudson River

There wasn’t a large race so I didn’t think I see anyone I knew but I did spot 3 runners I knew and then I was surprised to see Helen and Sue.  They were in the Turkey Trot and the Freihofer’s Training Groups.  I haven’t seen them since May so we chatted catching up on our racing experiences. 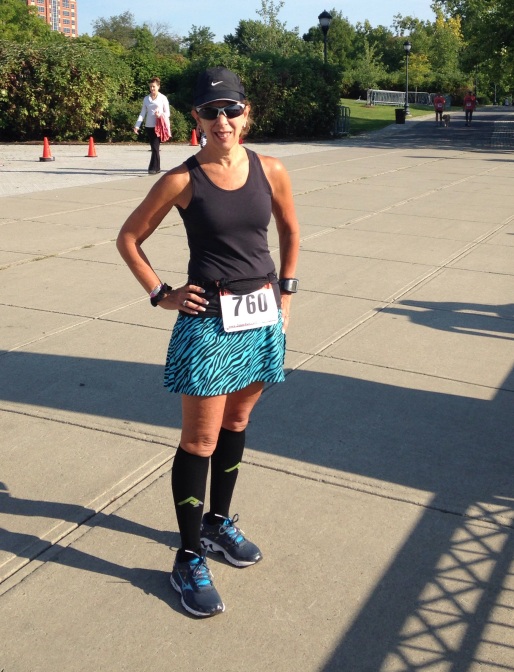 Soon, it was time to begin. Helen, Sue & I started together.  We quickly separated but would meet again after the race.

I wanted to have a good race and hoped that I could leave my turtle-like training runs behind and have a faster pace.  My legs had a different idea.  They felt sluggish right from the beginning.

There were 2 water stops a little after mile 1.  I grabbed some water and walked for a short bit but didn’t drink much thinking that there would be another water stop later for the 10k runners.

No water until these same 2 stops on the way back.  That meant nothing to drink for another 4 miles on a warm day!!

Anyway, I managed a decent time for the first half but I was very tired!!!

Maybe it was because the last race I ran over 3.1 miles was back in June.  Who knows??

The worst part was that I felt my feet starting to get blisters (especially on my right foot). Then my toe on the left foot started getting sore.  And then my lower back started aching.

Not a fun second half of the race. But I gave it my best shot.  I ran and walked when I couldn’t run anymore (which was several times.)

Most of the race I was playing piggyback with a young runner (Marissa) who happens to be the Head of the Board of Directors for the GOTR program.  I met her at a planning meeting for the GOTR 5K.  (I tried to ignore her hoping that she wouldn’t recognize me since I haven’t gotten any sponsors for the race…)

She was ahead of me most of the race but toward the last few miles, I went ahead of her. During the last mile, I couldn’t keep up and let her go ahead.

As I approached the finish, Sue was waiting on the side.  She asked me if I was going to finish under an hour.  I said “No way! She ran with me for a little while which was great. (I may have walked at that point if she weren’t there.)

Finally the finish line was in sight and I saw 1:00 but I also saw that Marissa hadn’t crossed yet.

And yes, my blistered old feet mustered up enough speed to pass her.

And yes, Marissa did recognize and said I helped pace her during the race.

Sue, Helen & I hung around waiting for awards and munching on the food (cookies, cupcakes, pretzels, bagels – yup lots of carbs).

And yes, I was the only one in my age group!!

The splits were not surprising.  My energy level got lower and lower with each mile.

The positives about this race.  It was a good speed workout.  I needed a race to get me moving and I certainly ran faster than I would have if I hadn’t been racing.

But I got spoiled about my feet not hurting all summer.  I think they like slow miles, short races, no compression socks and my Hokas. (At least I still have 6 weeks to figure out what to do with my feet.)

So even though I was hot and my feet hurt with every step, I changed into my Hokas, took off my compression socks and literally dragged myself for 3.8 more miles. (I may have walked more than I ran but I got it done!)

When I got home, I wanted to collapse. But I had to go to visit my friend’s new granddaughter and then take my mentee and her 2 sons to an amusement park. 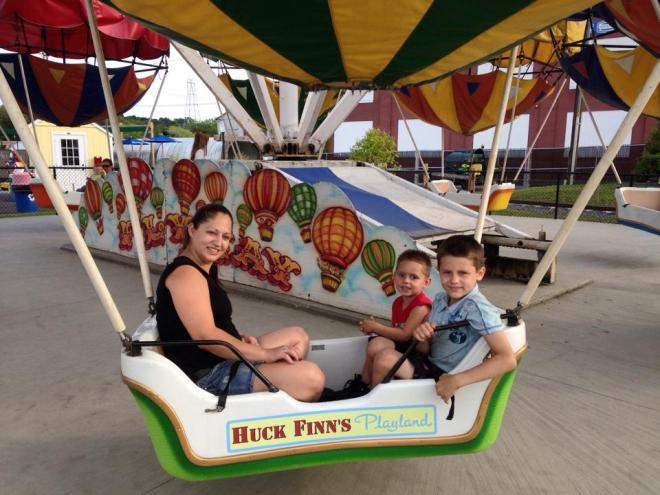 it was fun and it made me forget abut my race time. 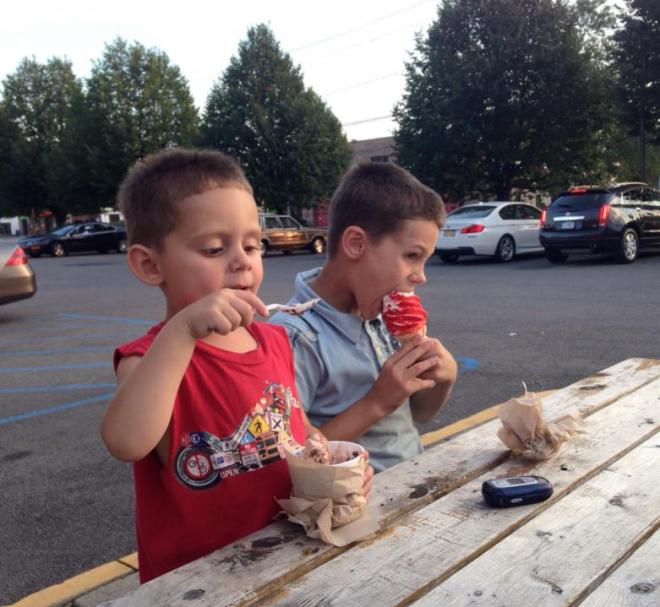 the ice cream helped too 🙂

I’m linking this one up with Jessica at The Silvah Lining–she hosts a Race Recap linkup every Tuesday. Please head over and linkup a race recap you’ve written, new or old. And check out some of the other posts!

Happy Running! How was your weekend?  Did you run or race?