Every Friday, three DC area bloggers Mary at Mar On the Run, Cynthia at You Signed Up For What?! and Courtney from Eat Pray Run, DC to host the Friday Five linkup.  Anyone can join with their own Friday Five post (yes, it must be a Friday Five!!)  They encourage you to visit other blogs on the linkup, comment, share and engage!

This week, the theme is Five Fitness Inspirations

Being active (running and playing tennis and occasionally yoga) makes me feel healthy, helps keep a healthy weight and as a result, I can wear whatever I want.

I am over 60 and I want to be able to wear the same outfits as a 20 year old (except for maybe a bikini). 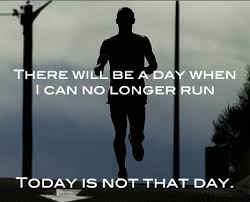 Every time I don’t feel like going out for a run, I remember when I was injured and couldn’t run…

and know that someday I won’t be able to anymore.

I think I run half marathons because running doesn’t come easy to me. It is hard. I struggle on every long run.

Every half marathon that I finish still leaves me in awe. I can’t believe that I actually have run 13.1 miles.

Harriette Thompson ran her first marathon at age 76. Now she’s 91 and still running marathons despite having had cancer, etc.

I’m not sure that I will ever run a marathon but I hope to continue running for a long time …hopefully still when I’m in my 90s.

This is John Anthony.  He is my 10 year old running buddy. I was paired with him last November though the IRUN4 program.

John Anthony has several rare genetic diseases – a skin biopsy showed he has SCAD which is an inborn error of metabolism. a metabolic disorder. His current geneticist thinks he also has glycogen storage disease type O and two of his specialists thinks he has Mitochrondrial disease (Mito).

He is in and out of the hospital and sick so often. He cannot go to school, often is too weak to walk and cannot do the things we all take for granted.

When I get them, I send him my race shirts.  He is wearing one is all the pictures on this page.  Inspite of it all, he is smiling 🙂

Happy Running! What are your favorite fitness inspirations ?