It was a beautiful morning for a race – cool & sunny. My hubby had a cold all week and yesterday I started to get it & had a lousy night’s sleep.  I woke up feeling crappy but knew that a race would make me feel better (and it did!)

I kinda wished the race started earlier than 10 am.  My hubby was annoyed that I would be getting to the lake so late.

I got to the race early and just relaxed.  The race is in its 5th year and had a record of about 600 participants; I didn’t know anyone which was odd but lining up, I met 2 ladies around my age and we chatted (about compression socks & running skirts.)

The race began running up a long hill.  I had a hard time getting moving.  Then the course continued through the neighborhoods of rolling hills (but not as bad as the beginning.) There were  a lot of volunteers along the course at every turn cheering runners on,  That was nice.

I felt better as the race went on and didn’t walk at all except for halfway at the water stop.

Finally the race ended going down the first hill. 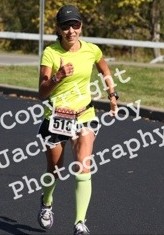 heading to the finish line

As I crossed the finish line, I saw that I wouldn’t break 30 minutes.  I was a little disappointed.

and another Age Group award – 1st – getting old isn’t so bad.

Unfortunately, I rushed off after the race to drive up to Lake George and didn’t get my award.

My goals for the race were:  remain uninjured, finish under 31 minutes, win a AG award,and most of all, have fun and I met them ALL!

I think I  made the right decision about the race.  The rest of the day was perfect and it was nice relaxing with friends and not have to worry about getting ready to run a night race (although I did hear it was fun – next year…)

(BTW:  This also counts as participating in the Worldwide WP 5k – just a day early.)

Happy Running!  Any running or races this weekend?

Druthers Helderberg to Hudson Half MarathonApril 17, 2021
81 days to go.