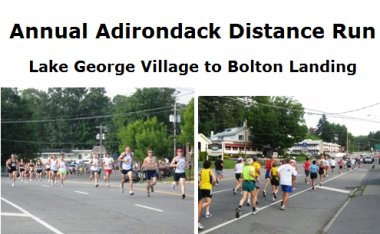 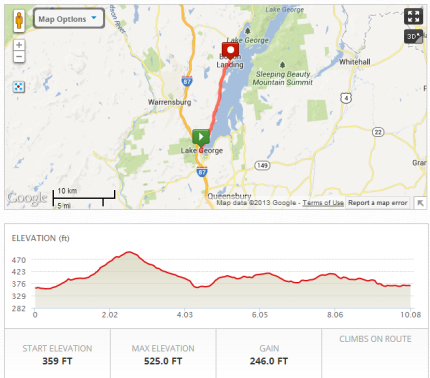 I was looking forward to this race.

I’ve wanted to run this race ever since I started running.

Except for 2014, something has always come up: work conference, strained achilles, broken ankle, broken foot, flight cancelled & stuck in Baltimore.

As usual, I was not really prepared.  I had been racing 5ks (two last weekend) and working on my speed.  Plus my running had been on mostly flat surfaces. My last long run was my half marathon on May 29.

So yes, I decided to run this race but not as a race but just as a hilly long run….take it slow and enjoy the scenery.

The race started at 7:30 am in the village of Lake George and ended in Bolton landing (next door to the marina where we keep our boat.)

the beach on the right is the end of the race

I had a few options. There was a bus leaving Bolton Landing the morning of the race  at 6-6:20 am so I could have spent Saturday on the lake with my hubby & friends and sleep on the boat. But I decided instead to stay home and drive up very early Sunday morning.  I wanted to get a good night’s sleep and get things done around the house.

It was already warm – in the 70’s and humid.  I guess I need to get used to running in the summer heat.

I got there and found parking in the same small lot as two years ago and walked to the fire station to pick up my bib.  Then I walked back to my car to get rid of the race tee shirt.

Back at the fire station, I used the rest room (there were real ones) and waited outside until it was time to line up.  I was surprised at how many people were racing – over 300 and all the fast runners were there (from the local running clubs.)

I bumped into some runners whom I haven’t seen in a while and we ran together for a short while and chatted (They are much faster!)

As I mentioned, this course is hilly but it is also very scenic.  I tried to focus on the scenery to take my mind off the hills.

I made a conscious effort to run conservatively.  I felt great and I felt strong but I was worried about overdoing in the heat and hills.

not me! I wish… (photo by Donald Yeaton)

So I think I walked a little during every mile except for the first.  I especially took it easy on the uphills.

If you remember my complaint from the Lake George Half Marathon about running on the uneven pavement on the side of the road, it wasn’t as bad for this race.  It was early and not much traffic until the end of the race and since it wasn’t an out and back race, you could run in the road and the cars were able to move over (as in the photo below.) 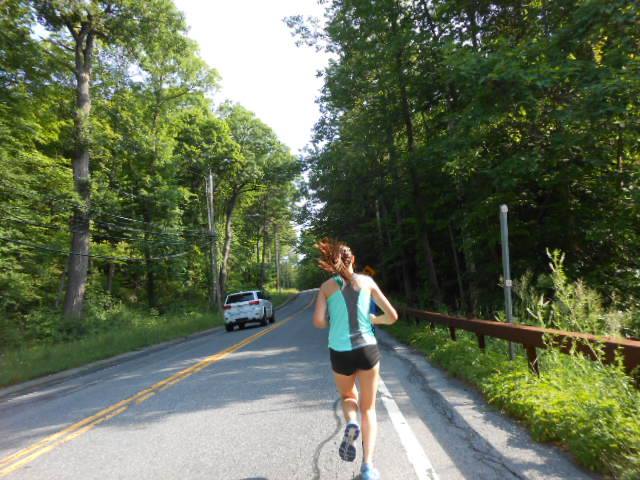 I kept glancing at watch and even with all the walking, I was still running around a 10 minute pace for the first 5 miles.

Then the foot pain set in.  No surprise here!  I started getting a painful blister on the right foot (even with the moleskin) and my toe hurt on the left foot.

The hills were steeper the first half but the second half seemed harder.  The hills kept coming and coming.  But I think it was really that my feet hurt with every step.

I knew by the last few miles that I would not have a PR so I kinda lost my motivation to push on.  I could have run harder but didn’t see the point. I walked more and more. The surprising part was that when I was running, I was passing guys.  Super cool.

I really loved running this race.  (Even with the foot pain and the heat.) It is the road that I drive every weekend during the summer to go boating. I know every inch of the route.

Anyway, I finally made it to where you turn to get to the finish line.  I was surprised to see my hubby and a boating friend there cheering me on. 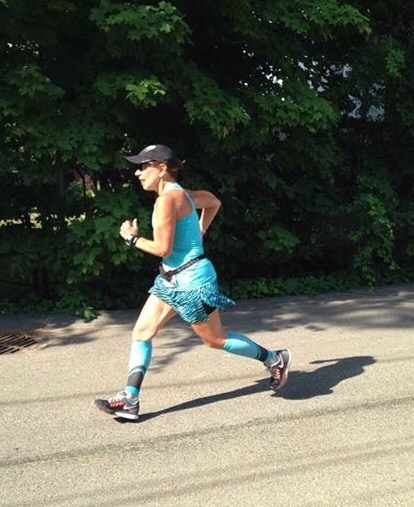 Of course, at that point I ran as fast as I could.

notice the clock says 1:42:06 and I was already past the line

Everyone got medals which is always a plus. 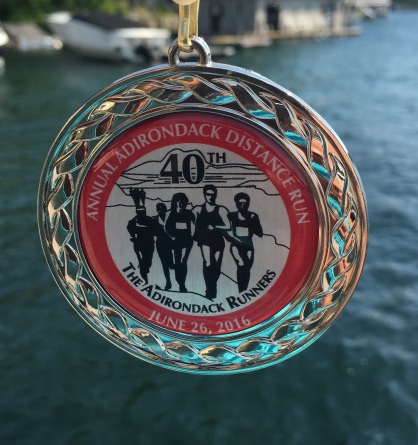 I was so happy to have finished.

I bumped into some friends again.

We headed straight to the water to soak my feet in the cold lake water. 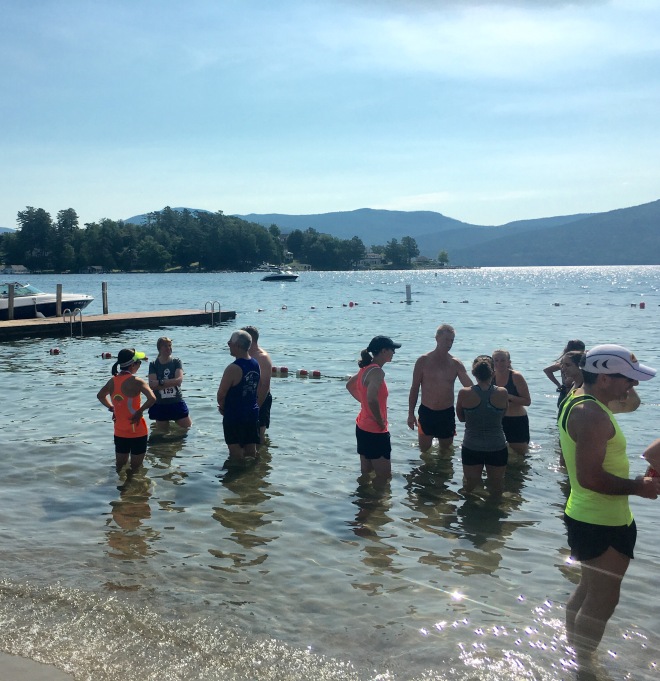 A great end to a great race.

Then I grabbed several pieces of watermelon and some pastry. The watermelon really hit the spot.

For this race, they gave out awards to first place in EVERY age.  I looked at the results and saw that there were two 63-year old women faster than me so I didn’t stick around.

I walked next door (how convenient) where my hubby and our friends were waiting to head out on the lake. I spent the rest of the day relaxing in the sun on the water.

The race had only gun times. I had no miles over 11 minutes so that’s consistent in a long race for me.  I’m pretty happy.  Maybe next year, I’ll actually train for it and race it.

As I already mentioned, this race was on my bucket list and now it is on my race to run every year list.

It was well-organized – lots of volunteers, plenty of water stops, someone calling out times at each mile, bikers warning you of oncoming cars, buses to the start before & after the race and you can’t beat the scenery.

This week’s topic is How often do you race?

And my answer is AS OFTEN AS I CAN!!!

Happy Running! Do you have a bucket list race? Do you have an important race coming up? How often do you run?