I love this race because I love the area. My friend has a house in Chestertown and I have stayed there many times for running, swimming, mah jongg, tennis and hiking. 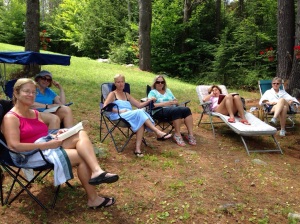 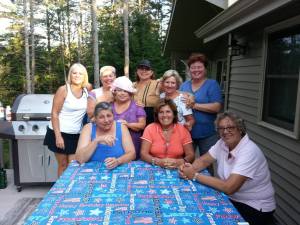 I usually drive up on Friday and I get my race packet, have dinner in town and then sleep in on race morning.

But this year I decided to stay home, play mah jongg and then get up super early on race day.

The weather was predicted to be summer-like (but not as humid as last weekend).  In fact, the marathon held the following day was even cancelled due to the heat.

I wore my Skirt Sports running skirt (of course) and a tank. (I remember two years ago, I was so chilly pre-race that I wore a jacket!!)

I parked in the Tops parking lot and walked across the street to get my race packet, use the restrooms and then wait until the race started.

The race was of part of the Adirondack Distance Festival. The half marathon (which I ran in 2011) and the marathon took place the next day in Schroon Lake. 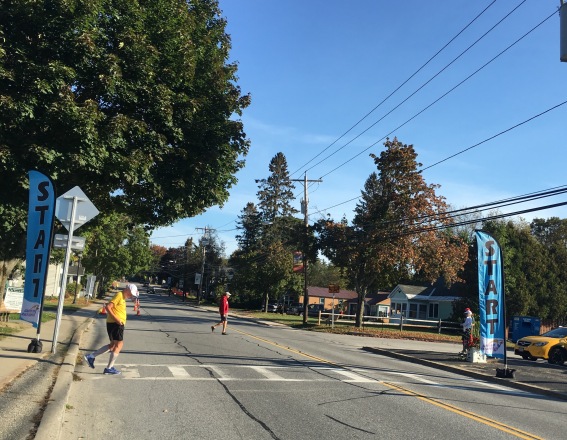 the start on Main St in Chestertown

While waiting to start the race, I wound up talking with another runner, Tracy, who recognized me from the Race the Train race.  In fact, she was the organizer of that race and she would be running a half marathon next weekend like me. We both decided that this would be taper run and we would take it easy.

This year, I was running a little tired having run a half marathon last Sunday but also with a half marathon in ONE week and needing to stay HEALTHY.  Tracy ran 15 miles last weekend so I guess we were in the same boat.

I was glad to have her beside me to keep me on track (meaning slow down the first 3 miles!!)

As you can see, the course is hilly…real HILLY!!!

Both the 5k and 10K runners start together and then separate. Since there was no timing mat at the start, I tried to stand not too far back.

Once I started running, I was sweating.  I tried to learn from the previous week and not start out too fast. It helped that most of the course was shady and I just kept pace with Tracy. I NEVER looked at my watch the whole race.

The hills didn’t seem as bad as the last time I ran it. I didn’t even walk until the first water stop at around mile 2.5 (halfway for the 5kers). It was probably due the fact that Tracy and I were talking … about races, of course.

Besides the hills, this was a beautiful course. You ran through the back roads and it would have been awesome if the foliage was at peak. It was still very enjoyable.

Around mile 3, you ran into the 5k runners but actually it was the ones who were walking. Then you separated again.

There were many more water stops on the course than I remembered…maybe because it was so HOT!!

Mile 4 was the only boring part of the course – a LONG uphill on a main road. This was the hill that I met Heidi 4 years ago. (We became friends and trained for and ran the Love Run Half together in 2014.)

Believe it or not, the hill didn’t feel bad this year. (I must be improving or I should thank Tracy again for the company.)

The hardest part of the race was mile 4.5-5.5. Hill after hill after hill. I think I walked at least 3 times. Tracy said she was tiring but she refused to walk.  So each time, I walked, she got ahead but I was able to catch up.

Finally we approached Main Street in town and I got a second wind and felt great until close to the end.

I walked briefly before the turn into the finish line but I gathered my strength and finished strong. In fact, I surged ahead and passed Tracy and another (young) runner. 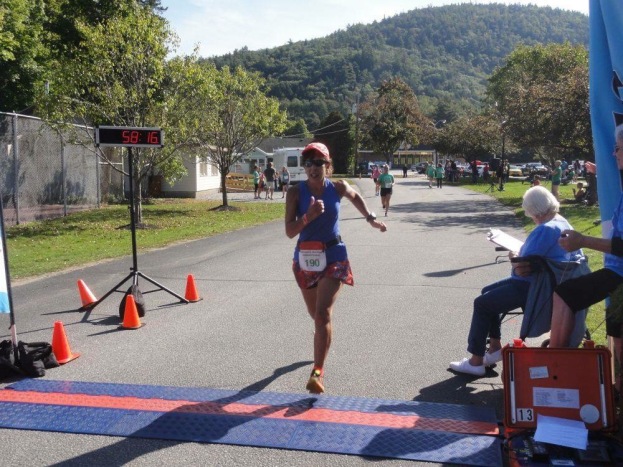 I finished at: 58:17 which was not a PR but over 2 minutes faster than the last time I ran this race and much better than I expected. 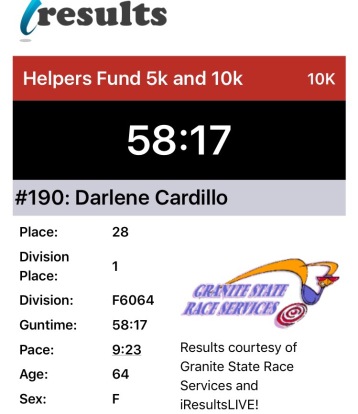 Even with the hills, my splits were ALL under 10 minutes and there were NO 8s. It worked not racing the first 5k!!

pic from FB 4 years ago

I had some refreshments (home-made – cookies, fritters, breads, bagels, etc) which were delicious especially the watermelon (I had many many pieces.)

Tracy and I waited around for awards since there was a chance there would be NO ONE in my age group and I might win.

Hooray for AG awards. Another medal to my collection.

Again, I thoroughly enjoyed this race. I hope to be back next year.

I had planned to run a few more miles today after the race. The area is so scenic. 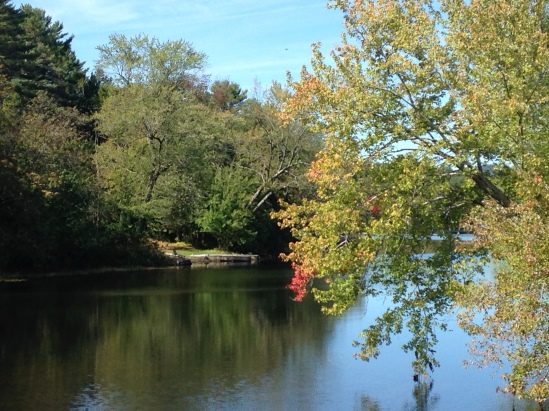 view of the Schroon River

Boy, did I NOT feel like it.  I was hot and sweaty. I called my friend who lived nearby and had invited me for lunch. But she hadn’t arrived yet. Darn!!

So I decided instead of running to go for a hike. I chose Stewart Mountain because it was only a mile up and not that difficult (I didn’t bring a stick since I wasn’t planning to hike.)

The trail was shady and there was a nice view from the top. Perfect choice!

Nearby was another mountain of similar difficulty but almost 2 miles up.  I felt energetic so drove there and climbed it.

I sat at the top for awhile and it was so peaceful.  I didn’t want to leave. Then a couple came by and asked to share my rock.  We chatted for along time.  It turns out that we live in the same town (1 1/2 hours away), play tennis and own the same car!!! So funny!!!

By this time, my friend had arrived so I went to her house and we had lunch and hung out.

I had planned two more hikes (Meade and Beckham Mountains) but my motivation had faded and I had ice cream instead.

I headed to the marina where I thought my friends were be there and I would hang and sleep on our boat.  But they had all decided to sleep at one of the islands so I drove home.

The next morning, the hubby and I drove back and spent the whole day on the lake (and IN the water).  Did I mention that it was over 90 degrees this past weekend!!!!!!!!

So a relaxing day after a busy day.  TAPER time!!!
Wineglass Half Marathon, here I come.  I am ready!!
And these are the predicted temps:

Sunday is the race – perfect weather!!!!!

This week I am also joining up with Running on Happy, Suzlyfe, Crazy Running Girl, and Coach Debbie Runs each week for the Coaches’ Corner linkup

Happy Running! How was your weekend? Any running or racing? Did your area experience the heat wave?

The Smuttynose Half MarathonOctober 3, 2021
9 days to go.